A broken family…put back together again

[Note: This story was published in June 2009. In August 2011, the family was reunited at O’Hare airport in Chicago, and permitted to live legally in the United States. Read the Associated Press story and CBS story on their reunion and check out the feature-length documentary – Tony and Janina’s American Wedding: A Deportation Love Story] 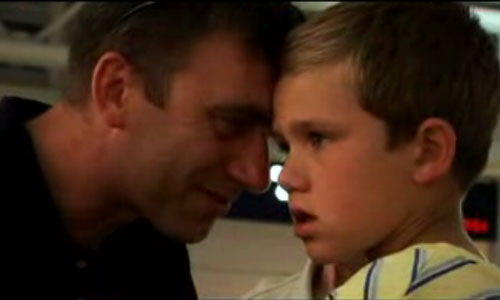 Tony Wasilewski and his son Brian on the day Brian and his mother left for Poland. (from video by Dreams Across America)

The voice on the answering machine says, â€œThank you for calling Brian, Janina, and Tony Wasilewski.â€ But for nearly two years, Tony has lived alone in his house in the northwest suburbs of Chicago, separated by more than 4,000 miles from his wife and son.

On June 8, 2007, Janina was deported, and the Wasilewskis decided it was best for their son Brian, who was about to turn 6, to go back to Poland with his mother.

Janina arrived in the U.S. in 1989, a refugee from communist Poland, and she applied for asylum as a member of the solidarity movement. By the time her case was heard, more than four years later and after she had met Tony, the political situation in Poland had changed and her asylum claim was denied.

During an immigration court hearing in 1995, Janina was ordered to â€œvoluntarily departâ€ the U.S., but she only spoke Polish and no translator was present. The judge didnâ€™t address her directly or explain the repercussions of not leaving the country.

Had she left then, the possibility of returning legally would have been much better. But she didnâ€™t, instead staying in the country and continuing to build her life in Chicago.

In the meantime, Janina gave birth to Brian, a U.S. citizen, and Tony received a green card and sponsorship through his work that gave the formerly undocumented immigrant a path to citizenship.

In 2005, the Wasilewskis tried to get Janinaâ€™s case reopened and reviewed. But it was dismissed by the 7th Circuit Court of Appeals. In March 2007, she received her final deportation order and in June, just after Brian graduated from kindergarten, he and his mother left for Poland.

As a deportee, Janina has to wait ten years before she can come back into the country. That means ten years away from her husband, now a U.S. citizen, who has stayed here to run a cleaning service company, the familyâ€™s only source of income.

â€œThis was the hardest decision of my life,â€ he said.

In September 2007, Tony testified in front of the Congressional Subcommittee on Immigration, Citizenship, Refugees, Border Security, and International Law, and told them his familyâ€™s story.

He hopes that by continuing to tell his storyâ€”to Congress, to the press, and to anyone who will listenâ€”he will be able to push for immigration reform that will prevent other families from being broken up.

â€œI feel obligated not only to share my story but also to be a voice of countless broken families who suffer due to our irrational immigration laws,â€ he told the committee. â€œI hope this hearing and my testimony will help all the separated families so they can be united again.â€