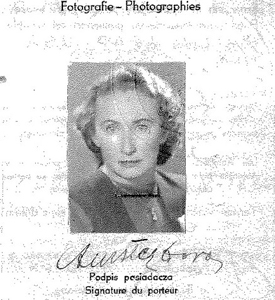 My parents were immigrants. I didn’t think of them that way, though I was embarrassingly aware that they were from the old country. By the time I was born, both of them were citizens, and they didn’t consider themselves immigrants.

They had come in different immigration waves. My dad came with his family in 1920 after World War I. He and the family followed his dad who had come before the war. They had been separated for nine years. My mom also came after the war, but World War II. Her family, what was left of it, was in Israel. Her parents and two siblings had been killed in, or on their way to, a concentration camp after being taken from their home. My mom had lived out the war as a Catholic with her sister and her sister’s son.

My dad and the family came for economic reasons, as part of what is sometimes called the Great Economic Emigration, to see if America promised something better than Sanok, Poland. My mom came as the spouse of a citizen. After the war, she tried to return to Sanok, Poland, where she too grew up, but someone had moved into the family home, they refused to acknowledge her existence, and so did everyone else in Sanok. She lived in France for a couple of years, married my dad there and came to the United States in 1948, on July 4. Independence Day.

They were both born in the same small town, Sanok, which is probably best described as being on the River San or in the Carpathian Mountains because the river and mountain haven’t changed. The country has. At one time or another in my parents’ lives, it was part of the Austro-Hungarian empire, Ukraine, Russia, Poland and Galicia.

My parents didn’t consider themselves Polish. I never have either. They were Jewish, so am I, and they tended to say, if pressed, that their country of origin was Poland, though they preferred to say Galicia. After I was born, neither returned to Sanok or to Poland. Neither wanted to.

My dad’s certificate of citizenship is dated April 9, 1948, though he had actually become a citizen 25 years earlier, in June of 1924, after being in the United States as a young man for four years. My mom’s certificate of naturalization is dated Jan. 9, 1951, about 2-1/2 years after she got here, and about a year before I was born.

She had entered the United States on a Polish passport, which was a forgery, or as she called it – “false papers” – created so she could survive in Poland during the war. It had her birth date as five years younger than she actually was.

A few years after I’d already graduated from college, I discovered to my mother’s shame that she was five years older than I or anyone else had thought. She believed to that day that if it somehow came out, she could be deported. She had lied to get into the United States and to become a citizen, she thought. She was illegal.