Running for his life 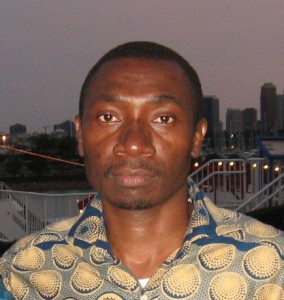 A lot of things make Achille Ngoma remember back home in the Congo. Like safety. “In the Congo, the last seven months before I fled, I never felt safe.”

Even after he arrived in Chicago in September 2006 on refugee status, the sound of an ambulance or police siren would still spook him. ” I’d think maybe they are looking for me.” Eventually, month after month, he got used to the cacophony of the inner city.

The Congo’s democracy was derailed in 1997 when Denis Sassou Nguesso overthrew President Pascal Lissouba. In mid-October, the Lissouba government fell.

Ngoma was on a train to leave Pointe-Noire, the Congoâ€™s leading coastal city, when the media announced that militia from Angola helping Sassou Nguesso had taken over the city. At that point, all forms of transportation out of the city were cancelled and Ngoma was trapped. “I found myself in the city with no more support,” he said.

Ngoma was in a unique situation. He had briefly served as a press officer for Lissouba. Now that the government was out of power, militia from Sassou Nguesso were searching and killing people who had served the former government. As a journalist who worked in national television, Ngoma was easily recognizable.

He went into hiding with his aunt. “I kept myself in a safe place and I stayed there for three months through October 15 to January 5. I had a lot of blood pressure, a lot of stress, a lot of anxiety because I had never stayed voluntarily more than four hours in a bedroom in daytime.” At night Ngoma would venture out, seeking social interaction and information on what was going on in the city.

He created a small group of young people who had supported his youth television show. “They were like my spies,â€ he said. â€œIt was like my intelligence group. They walked around the city, gathered information and told me what’s going on in the city.â€ There was a restaurant where people for Sassou Nguesso gathered to talk. Ngoma paid for the youth to get coffee or breakfast at the restaurant and gather information.

â€œThey went there. They sat, they ate, they listened. They took notes and brought them back to me so I could know what the militia was planning. That’s how I discovered they were planning to kill the journalists that had fled Brazzaville, the capital, to Pointe-Noire.â€

The man who was appointed Commander-in-Chief in Pointe-Noire rented a bus, calling it the ‘Bus of Peace,’ to transport all the journalists from Pointe-Noire to Brazzaville. However, in-between the two cities there is a military camp about 40 miles from Pointe-Noire, in Makola. â€œOnce the bus reached the village, they would have fired on the car and killed us,” Ngoma said.

Ngoma finally escaped the city on Jan., 5 1998, when a brother-in-law with connections to the railroad company helped plan his escape. Ngoma traveled in the train engine from Pointe-Noire to Dolisie, his home city. “It was very hot and very loud,” he said.

Many who fled the capital city were staying in Dolisie and the situation soon became unsafe there as well. â€œSassou Nguesso’s militia would surround neighborhoods in the night and by dawn they would start knocking on doors,â€ he said. â€œThey would ask people, ‘Do you live here? Do you have somebody hiding here?â€™ and if they found somebody they would shoot or detain him.â€

Ngomaâ€™s mother felt he should flee the area, but he did not want to. â€œI felt like this was my very home,â€ he said. â€œI thought if they want to kill me, okay they have to. But, my mom said, ‘You’re still young. You have a lot to do for the family. All the family is leaning on you for everything. You’re the only one who has attended a college.â€™” Ngoma was 31 years old at the time. He made a deal that when he felt unsafe, he would leave.

One day, a childhood friend approached him and warned Ngoma to be careful. He worked for Sassou Nguesso’s secret service. “He told me, ‘Our boss for the secret service has said they have information that ex-President Lissouba has sent a lot of money to pay people that worked for him. Journalists, administrators, everybody. My boss saw you going back and forth on this avenue and he said maybe we should capture you and beat you to confess if this information is true. So don’t walk around here anymore. Be ready to leave here.'”

Ngoma fled to a small village within the Congo for two weeks in March. He then fled to his wife’s village but in April, the situation got bad. The war started again and even though it was a hundred miles away, militia moved around. He told his mother-in-law he needed to go and returned to his city to tell his mother goodbye.

He fled to Gabon where his father lived but the trek to the border was very hard. “On the way, Sassou Nguesso’s men had posts with people patrolling, checking cars, so you needed to go through the jungle,â€ Ngoma said. â€œThey knew people were going through the jungle and would sometimes shoot into the jungle. Their thinking was, ‘Maybe they are following the road through the jungle.’ They fire, they fire, and they killed a lot of people like that.” Ngoma had to travel light and subsequently had to sustain himself on roots as he made the journey with others.

He successfully reached Gabon, before his wife and first daughter. They joined him in 2000, along with his nephew. He received refugee status in Gabon in 1999 and stayed there working as teacher and journalist for eight years. In July 2004, he was hired as the first journalist in the first private news agency started in Gabon.

In March 2005, he started the application process for refugee status with the United Nations High Commissioner for Refugees (UNHCR). In May 2005, the committee interviewed him and in February 2006 he was told he qualified and his files were transferred to the U.S. Department of State. In April 2006, Ngoma and his family got refugee status for the U.S. That September, they left for the States.

Since then, Ngoma has been living in Chicago with his wife, nephew and two daughters (ten and five years old). He has been working with U.S. immigration services through the family reunification program to bring his son from a previous marriage to join them next month. His son, 20, had been living with his ex-wife when Ngoma fled.

U.S. law prevents refugees from going back to their home country but he’s in no hurry to return. “I’m taking it very easy,” he said. “I’m just going to wait until I become citizen so I can travel.”