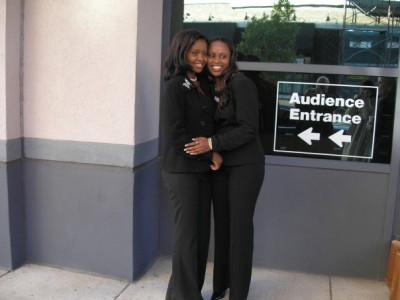 Clematine and Claire after an appearance on the Oprah Winfrey Show.

Clemantine Wamariya had fallen asleep on her sisterâ€™s couch, one of her favorite places to sleep, when she heard a knock at the door of the government housing. It was about 3 A.M.

To Wamariya, America means falling asleep without worrying if she will be woken up to pack and leave. She spent years in refugee camps in Africa with her older sister, Claire Mukundente, after the Rwandan genocide in 1994. They came to Chicago together in 2000; Clemantine was 12 and Claire, then 21, had her two children in tow and was expecting a third.

Mukundente answered the door, unfazed. It was an African woman from Burundi whom Mukundente works with at the Uptown Neighborhood Health Center, holding a letter in her hand she needed translated.

Mukundente often takes these night calls to translate for these refugees, some of 8,500 refugees in America as of 2007 who had been in Tanzanian refugee camps since 1972.

â€œI canâ€™t tell people not to come because they have nowhere to go and Iâ€™m the only one who can help,â€ Mukundente said, who, with a delicate and soothing voice, speaks four African languages as well as English and some French.

Sometimes the refugees come to her in the middle of the night with what they believe to be urgent messages that Mukundente must tell them are only junk mail.

During the 100 days of genocide in Rwanda, Wamariya and her sister clung to each other in a banana tree above their home, believing at the time that their family was being murdered just below. In Chicago, both sisters work avidly to allay the effects of genocide. Mukundente works four days a week at the health center and takes weekend calls, while Wamariya speaks around the country about her story, including at the United States Holocaust Memorial Museum.

She has been featured on the Oprah Winfrey Show three times to share her story. The first time she appeared on the show, as a winner of Oprahâ€™s National High School Essay Contest about the book â€œNight,â€ she and her sister were reunited with her parents and siblings for the first time in 12 years. They are now reunited in Chicago with their mother and father who survived and came to America over a year ago, along with three new siblings.

The sisters share their ideals, beliefs and history, but America has given them two different lives.

Mukundente lives in Uptown with her three children, close to where she works, and her family lives around the corner from her. Wamariya lives in Winnetka with her foster family where she attended New Trier High School, and just completed senior year at Hotchkiss Boarding School. She will attend Yale this fall. When Wamariya visits her sister to see her at work or crash on the couch, she knows she is coming from farther than just the suburbs.

Wamariyaâ€™s friends from Chicago are American, and as she notes, mostly affluent suburban-raised students now attending private colleges. Her friends from boarding school are from all over the world and, she noticed, even more priveledged than her friends from home. Wamariya did modern dance all through high school; she drives a bright blue Volkswagon bug.

But when she sees her sister, she finds her eating the same food from Rwanda, friends mainly with other refugees from their country and other parts of Africa.

Mukundente said about her community, â€œI feel like Iâ€™m in a family.â€

Wamariya knows she adjusted more to America than her sister.

â€œI went to one of the best high schools in Chicago, boarding school, Yale.â€ She is tentative to use the words â€œAmerican Dream.â€

Wamariya once accompanied her sister to the health center and offered to help translate. She found herself asked by a doctor to tell a mother that she had an incurable blood disease that had passed along to her children. Wamariya began and burst out crying.

When Mukundente started working at the Uptown Neighborhood Health Center three years ago, she cried a lot too. But she found ways to work through it and to share her lifeâ€™s work with her sister.

Mukundente rented out space at Lawrence and Sheridan, found a priest, and started a church for the Burundian refugees. After services, they come to her house and eat, sing, dance and â€œjust be,â€ Wamariya said, who attends often with her sister.

Wamariya tried to attend college close to home so that she could spend time with her sister and get to know her parents again, but the opportunities Yale gave her were impossible to turn down, she said. But even though she knows her life is moving farther away from her family, these are choices she never anticipated sheâ€™d have the luxury to make.

â€œIt doesnâ€™t happen where the whole family survives Rwanda and are all together in America,â€ she said. â€œSometimes Iâ€™m scared to sit down and feel all the good things that happened to us because itâ€™s so impossible.â€