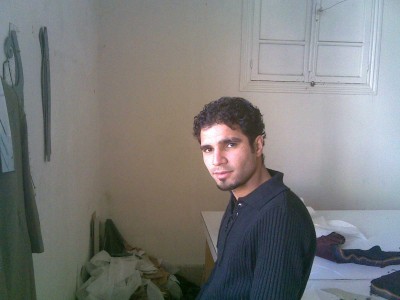 On the second floor of a dim, musty apartment complex in a quiet suburb of Chicago, three-month-old Yazan is comforted with the hushed Arabic words of his mother, Nasma. Her low tones soothe his cries, tranquil assurances of calm from a woman whose life has been anything but.

Nasma Majeeb and her husband Ahmed Makki arrived to the United States six months ago, fleeing the violence in their hometown of Baghdad.Â  Ahmed knew it was time to go when Nasma became pregnant, but refused to give up her job as a doctor in an understaffed Baghdad emergency room.Â  His involvement with the U.S. military had already made him the target of several violent attacks, and he did not want his son growing up with only a picture of him. Nasma would raise their son alone in the U.S., but at least she would no longer come home from work covered in blood.

Forced to leave their comfortable, upper class life in the country of their ancestors, Ahmed and Nasma now lead a humble existence in the nation that was in many ways what drove them from their home.

As harrowing as their story may be, it is not unique.Â  In 2008, Illinois resettled roughly 7 percent of the 14,000 Iraqis admitted to the United States, according to Illinois Refugee Resettlement director Edwin Sullivan. And with 1,400 Iraqi refugees expected in Illinois in 2009, the number is only growing.

In January 2008, Congress passed the Refugee Crisis in Iraq Act, granting 5,000 Special Immigration Visas for Iraqis who had aided the U.S. military. What was a trickle of refugees entering the U.S. at the warâ€™s onset has turned into a steady stream of immigration. â€œI expect to see Iraqi arrivals continue over the next twenty years,â€ Sullivan says.

According to Carolyn Swabek, volunteer coordinator for Interfaith Refugee and Immigration Ministries, Iraqis have made up at least half Interfaithâ€™s resettlement clients since August 2008. â€œWe kind of owe it to them,â€ Swabek says. â€œI think a good amount of refugees see the U.S. as the reason they became refugees. They come here expectingâ€¦America will take care of you. â€˜We helped you, you should help us.'”

Itâ€™s this sentiment that may skew many Iraqisâ€™ expectations of their new life in the U.S., Swabek says. Many come expecting the American Dream, complete with a well-paying job and spacious home. Instead, they arrive to find their impressive Iraqi qualifications do not translate into American success. â€œYou have people who are living more or less comfortable lives who are now starting over, and starting over in poverty,â€ Sullivan says.

Although the Bedrawyâ€™s small apartment is filled with new appliances and shiny electronics, these are luxuries from a past life. In Baghdad, Ahmed was a prominent architect who built palaces and supervised 150 employees. Now he is without work, refusing to take what he calls a â€œsurvival jobâ€ like working in a store.

â€œâ€œI sent applications to many employers and I didnâ€™t get anything back from them,â€ Ahmed says of his search for work that suits his background. â€œSome of them have sent me the usual letter, â€˜your skills and qualifications donâ€™t match what we are looking for,â€™ even though the job description was describing me. I donâ€™t know why.â€

The frustration that Ahmed feels is common among Iraqi refugees, who tend to be educated and from middle to upper class backgrounds. Nabeel Attiya left a job as a U.S. translator in Baghdad for a job in the dining halls of Northwestern University. Twenty-five-year-old Haider Abdalgani works receiving shipments for Avon Cosmetics, after teaching high school English and working as a translator in Nasiriyah. Yasser Jasim climbed the ranks of Sadaamâ€™s army to the title of sergeant, only to pack boxes in a warehouse in Chicago.

â€œSome of the Iraqi refugees feel quite bitter that they had lost their professions and careers,â€ Sullivan says. â€œTheyâ€™ve lost everything as a result of the U.S. invasion.â€

For most refugees, the war cost them more than their social standings. Buried beneath the surface struggles to make ends meet are the inner battles with mourning and loss. Battles that can sometimes be exacerbated in the United States, a nation that is both the cause of their pain and a refuge from it.

Interfaith volunteer Jerome Hopkins was confronted with this distress in his first meeting with client Jasim. â€œI wanted to get an idea of his situation,â€ says Hopkins, who began to draw pictures of family members in an attempt to cross language barriers and understand what family Jasim had left behind. From what Hopkins could glean from Jasimâ€™s broken English, another man had shot his father and brother over sectarian differences. â€œâ€™Mom dead, sister dead, Bush come bomb house,â€™â€ Jasim explained to Hopkins.

For this, Jasim holds mixed feelings for the country he now calls home. â€œI like the people,â€ he says. â€œAnd I hate the government.â€

Outwardly, Jasim appears unfazed by real-life tragedies that others can hardly imagine. Hopkins tells the story of taking Jasim to a Rogers Park bar. Though Jasim had to pantomime opening a beer to order his drink, his limited English didnâ€™t keep him from befriending every patron in the bar, where he is now a regular.

Jasimâ€™s story mirrors that of so many Iraqi refugees living in Illinois. While the details differ, and their views on the U.S. occupation vary, each story is one of a fight to succeed in the so-called land of opportunity.

â€œItâ€™s good to live here,â€ Ahmed says, cradling his infant son, â€œbut the struggle Iâ€™m facing is to get a job, to get into the system, to get my wife into the system.â€