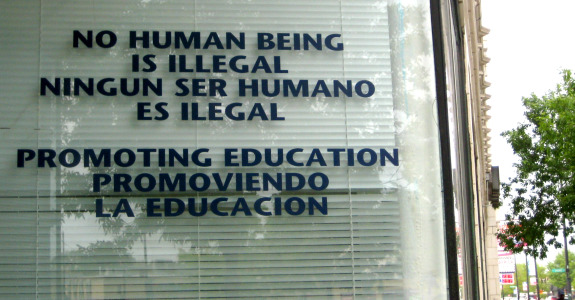 At Centro Romero, it's people that matter.

In a small humid foyer, fast-paced Spanish is interrupted by a constant opening and closing of doors as people bustle in and out of the lobby at Centro Romero, a community-based organization that serves Spanish-speaking immigrants on Chicago’s north side.

Legal Program Director Frank Melone speaks softly under the chaotic hubbub, sweat beading on his forehead, but his words are loud and clear: the diversity of the Latino community, despite posing a challenge to political organization, is what makes his job so interesting and rewarding.

The Latino community is unique among minority groups because it is constantly changing, shaped by the continuous feature of immigration. This makes immigration a key determining factor in the future success of Hispanic political representation, a fact not unrecognized by community leaders.

At the Ravenswood-based Coalition for Arab, African, Asian, European & Latino Immigrants of Illinois (CAAAELII), an umbrella organization for Chicago area immigrant organizations, this has been recognized and built its mission and philosophy.

â€œWe aim to not just provide a service, but to empower people so they not only know their rights and available resources, but also how to organize, how to take off in leadership, and how to become an activist,â€ said Lourdes Ramos, a program director at CAAAELII.

â€œItâ€™s much more comprehensiveâ€”it’s not just about teaching people, but about teaching them to advocate for themselves and for their community as a whole,â€ she said. One way Ramos does this is to encourage CAAAELIIâ€™s 34 member organizations to engage communities through leadership programs and advocate for immigrant rights at a political level.

â€œWe want to give the organizations the capacity to not just provide service, but to act as community developers and large-scale organizers,â€ Ramos said. In the Latino community, this is of particular importance. Hispanic political representation has not matched the growth in Hispanic population.

Though Latinos are often the largest ethnic group in a given neighborhood, the diversity within the population poses a challenge to organizing, especially in the context of politics.

â€œThe majority is from Mexico but there are a good number from the Caribbean and particularly from Puerto Rico, but also from all the other different countries of Latin America,â€ said Ramos. Although these groups are often lumped together, their cultures are distinct despite sharing a language, and they do not always identify with each other.

Generational divides also continue to shape the Latino community, as more and more waves of immigrants continue to arrive, causing the Hispanic population to grow at a rate of three times the rest of the population, according to the United States Census Bureau.

â€œSome of the younger folks begin to identify with the culture here, but even that is an amalgam; a mix of their traditional culture and mainstream culture,â€ Ramos said. Because of this, many young people donâ€™t feel like they fit into the mainstream culture even though they speak the language and listen to the music, and as a result, a sort of subculture is created.

In addition to the generational divides, there are class differences.

In Chicago, which has long been a haven for immigration, there are already generations of established Latino immigrants who have been successful in the community and created their own sort of â€˜Little Mexico,â€™ according to Ramos.

â€œThese more established folks might feel like the new folks just coming in are less educated or more rural, and there might be some â€˜us and themâ€™ in terms of â€˜weâ€™re now citizens and real residents and you arenâ€™t,â€™â€ Ramos said.

Itâ€™s challenging to bring such a diverse group of people together and unite them under a common goal, especially when the issues, such as immigration, are so complex.
Melone believes that this unification and eventual change starts at the level of the family unit.

One of the ways Centro Romero aims to accomplish this goal is by working for improvement and reform of the law where it doesn’t currently support the family unit.

â€œWeâ€™ve supported reform initiatives such as the McCain-Kennedy Act and the Dream A because this is the kind of reform we feel would benefit the family unit,â€ Melone said.

Acting politically to carry out community initiatives is a method used at CAAAELII as well, where anyone eligible is strongly encouraged to become a citizen, be knowledgeable and ready to vote, and know who their elected officials are.

â€œWeâ€™ve also focused on making sure people know how to organize when they arenâ€™t getting what they need from their elected officials and know where to go for resources when the government for example does not provide those resources,â€ Ramos said.

Ravenswood resident Jaime Javier Zaballa agrees that itâ€™s key to communicate with elected officials, but his â€œnot so goodâ€ English skills are a barrier to that, he said.

â€œIf thereâ€™s a problem in the community, itâ€™s very important that you communicate with the proper people so they can get something done,â€ he said in his native language.

Immigration is an issue that will only increase in importance as time passes, he noted.

â€œI think that the work around immigration is needed to be ongoing and I donâ€™t think weâ€™ve seen the last big waves of immigration in this country,â€ Ramos said. At CAAAELII, there is an emphasis on viewing immigration as a basic human rights issue, not just as a tangle of policy and politics.

At Centro Romero, as young people begin to fill the lobby as part of a youth soccer program, this could not be more evident.

â€œWorking with immigration practice gives an opportunity to really think about how we can make things work for all members of the human family of which we are all a part of,â€ Melone said, his voice a whisper and his eyes on the steady stream of jersey-clad kids.

â€œI think that there are fears that play upon us and upon public opinion and plays against the immigrant. But we do ourselves a disservice if we forget about our origins, because the greatness of our country all goes back to immigration,â€ Melone said. â€œAs our nation moves towards the future and towards a new age of political representation, itâ€™s crucial that we keep this in mind.â€