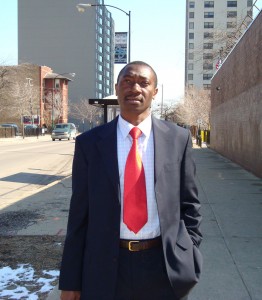 For many immigrants who come to America, the expectation and pressure from people back home can be as challenging as navigating through their new life.

â€œMany people in Africa think that when somebody gets into the U.S., by the next couple of weeks he should be able to send a lot of money,â€ said Achille Ngoma, a refugee from the Congo. Ngoma arrived in Chicago in 2006 with his wife, two daughters and nephew.

In order to qualify for refugee status Ngoma had to prove to the United Nations High Commission on Refugees that he fled his home in fear of â€œbeing persecuted for reasons of race, religion, nationality, membership of a particular social group, or political opinion.â€ In addition he had to show he could not return for the same reasons. The law permits inclusion of a spouse or any unmarried children under the age of 21 on the application. His daughters are 10- and 5-years old.

Before coming to the United States, Ngoma and his family had fled the Congo for Gabon, where they lived for eight years.

â€œOver there, people just think about the U.S. in the movies. So everything they see in the movie, they think it is true. Maybe I thought the same before.â€

Ngoma had his own preconceived notions. His biggest shock was the size of his apartment.

â€œWhen I came here, the first apartment I got was just a little bit different from the apartment I had in Africa. I had two daughters and one nephew and we had a one bedroom apartment,â€ said Ngoma whose apartment in Libreville, Gabon, had three bedrooms and was much less expensive. â€œI told my wife, â€˜I think this is not the U.S. We are seeing a lot of lights over there, a lot of colors, but I think this apartment is not in the U.S.â€™ And she said, â€˜This is the U.S.â€™â€

In the beginning, Ngoma was not working. The process to get his social security card and other identification took time. He also underwent an operation for a hernia and as a result could not work for awhile. This was especially difficult to explain to family back home.

There is no financial incentive to becoming a refugee. Refugees are required to sign a promissory note and pay back their travel expenses to the States. When they arrive, they are given a green card and a social security number. They can then apply for a State ID and driverâ€™s license. After five years living in the States, they may apply for citizenship.

â€œWhen I got here, my son by my ex-wife (both remained in the Congo) got sick. She called me to say I should send some money for him to go to the hospital. I said you can reach my family and ask my family whatever they can do because I canâ€™t send you money right now. Iâ€™m not working. She said, â€˜The only kids that you can help are the kids that traveled with you,â€™ but she was wrong.â€

Ngoma now has a survival job working in the luxurious James Hotel in downtown Chicago. He and his wife are trying to save money, but â€œitâ€™s very hard when you know that from Africa, every week or every day somebody calls to say hey look, â€˜Iâ€™m sick. Send some money,â€™â€ he said. â€œYou canâ€™t resist because when you think how people live in Africa, you canâ€™t help but say okay. So every month I send like $500. I have my Mom, I have my Dad, I have my uncles. I have my son. I have some friends, too, I should help.â€

Ngoma is trying to be more selective in how he sends money. â€œI told my family, â€˜You guys canâ€™t think Iâ€™m going to send you money every time. You need to think about some projects, something that can make money grow.â€™â€

Recently, Ngoma sent $2000 to his uncle so he could open a general goods shop. â€œIf heâ€™s a good guy, in maybe one year I wonâ€™t have to send money. If somebody in the family needs something, he can buy it instead of people calling me saying â€˜send money, send money.â€™ Maybe here I can save more money because back home I will have something that is generating money.â€