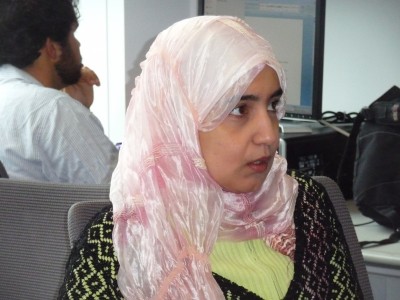 shootout between police and unidentified snipers, an event she calmly describes as one of her â€œadventures.â€ She was living with her family in Amariya, a section of Baghdad, at the time.

â€œI was between the bullets and I was trying to hide myself under concrete. They were trying even to kill me, the police,â€ Al-Rawi said. â€œI was running to get to my home.â€

Al-Rawi is an Iraqi refugee and has lived through wars since she was in 6th grade, though the violence escalated in 2003 with the U.S. invasion of Iraq. The 29-year-old soon grew accustomed to hearing the sound of bullets everyday. She did not watch the news about what was going on in the war because â€œthe news was in the street.â€

Al-Rawi is currently living with her sister and parents in Chicago, a world away from Baghdad. But not everyone in her family was fortunate enough to leave â€“ her two brothers are still living in Baghdad, along with other members of her extended family. The violence has decreased since 2006, when one of her cousins was killed by a bomb in Fallujah.

Another one of her cousins was kidnapped, according to Al-Rawi, though his family did not know by whom. The kidnappers stole his money and car, and they held him for ransom.

â€œAfter we give them money, they told us you can find him in the hospitals, but he was dead.â€

Al-Rawi fled to Jordan with her parents and sister in July 2006, and they lived there for over two years. Al-Rawi refused to say goodbye to her friends. She was adamant that sheâ€™d be back in Baghdad someday soon.

â€œI was in the airplane. I saw Baghdad under the airplaneâ€¦. at this time I said to myself, itâ€™s real,â€ Al-Rawi said. â€œAnd at that time I was crying.â€

In most ways, their living situation was much better in Jordan because they had finally escaped the war. The difference between the two countries was clear.

Not everything was perfect in Jordan, however. The Al-Rawis were living there without visas. With their money running out, Fatima found an administrative job with an Iraqi company. Though Iraqi companies were willing to hire their fellow countrymen, the workers kept low profiles because it was illegal for them to work in Jordan. They were forced to hide if someone from the Jordanian government ever came to inspect the company.

â€œIf [the government] found you working maybe theyâ€™ll charge you for some money,â€ Al-Rawi said, â€œor maybe they will take you to the prison or jail.â€

The Al-Rawis applied for protection with the United Nations High Commissioner for Refugees (UNHCR) to avoid being forced to leave the country because they were living without visas. They were granted refugee status and were assigned to live with relatives in Champaign, Ill.

â€œI told myself that Iâ€™m dreaming or something. I saw the houses just like the TV films,â€ said Al-Rawi about her arrival in the U.S.Â  â€œI told [my friends] it was just like I was in the heaven.â€

After living in Champaign for over a year without a job, Al-Rawi and her family moved to Chicago three months ago and received their green cards a month later.

One of Al-Rawiâ€™s biggest regrets is that she did not take more pictures of Baghdad when she was living there. She misses most not seeing the Tigris River under the al-Jadriyeh Bridge at sunset.

â€œIf I would go back to Baghdad someday, I would try hold my camera and take pictures,â€ Al-Rawi said. â€œBut the sad thing is that everything is different in Baghdad. Even if I would like to, I wouldnâ€™t see the sunset like before. Even the river isnâ€™t clean anymore.â€

Al-Rawi hopes to return to Baghdad one day to visit, but she is unsure whether or not sheâ€™d like to live in the Middle East again.

â€œI like life here. Because the situation is stable, you can plan for anything without fear that something [might] happen,â€ Al-Rawi said. â€œIn my country we were just living day by day.â€