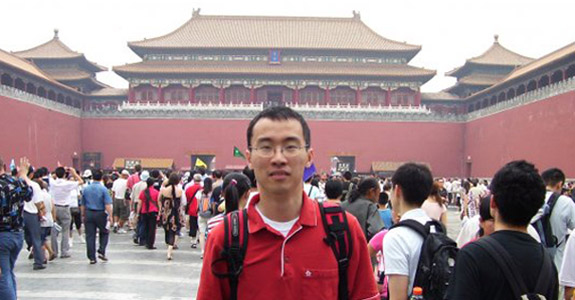 Shijie "James" Shen returned to Shanghai, the city of his childhood, last summer to visit the family he left nearly thirteen years earlier.

I still snicker whenever he speaks with his parents on the phone in the lounge outside our dorm rooms.

â€œNi-hao,â€ I hear him say to his mom in Mandarin. How are you?

Itâ€™s a language I hadnâ€™t heard before as a life-long resident of the south suburbs of Chicago. In my nineteen years, Iâ€™d never left the Midwest, much less the country, and never truly known a person from China.Â  Sure, I had my fair fix of Chicagoans, but China was a distant world, a place I believed people ate with chopsticks from funny-shaped containers. Here in Chicago, my grandparents still used the term â€œorientalâ€ to describe the man who delivered our Chinese food.

When I first met Shijie (pronounced SHEEâ€™-jee) in the common area of our residence hall last year, we introduced ourselves as awkwardly as any other freshmen. When I entered the room, he was sitting alone on a couch in a thick purple sweatshirt, his short jeans not quite long enough to cover up his bright white socks. Does he speak English, I thought to myself. I wasnâ€™t quite sure.

I was surprised when he turned and introduced himself as â€œJames,â€ his English clearer than most Chicagoans. Rather than the odd-speaking foreigner I expected, James was just a normal American kid â€“ he had his quirks, to be sure, but he was American nonetheless. I realized the fault of my initial judgment, believing him to be someone I could never talk with, much less understand. But we became fast friends. He followed the 2008 presidential election just as closely as I had, so we found common ground in politics â€“ even though we disagreed.

I soon discovered that James was a teenager not unlike myself â€“ an awkward and quiet student â€“ but with a history of immigration and migration that set our histories far apart.

James told me later that his parents gave him his American name when he was 10 years old after one too many of his American teachers botched the correct pronunciation. â€œNone of them could pronounce my name right,â€ he told me. â€œThey kept calling me â€˜sushiâ€™.â€ Though he canâ€™t recall the specific reason his parents chose the name James at that point in his life, he often exaggerates the connection between his name and that of a certain secret agent. â€œJames Bond gets all the ladies,â€ he often reminds me.

The Shens traveled to the United States in 1994, when James was only 4 years old, leaving behind their only son while they scoped out what was then a foreign country.

Jamesâ€™ father, a scholar from Shanghai, was pursuing his doctorate in civil engineering when he and his wife flew to Akron, Ohio, in search of an education, leaving their son behind with his grandparents. Like many children of immigrants, James explained, he remained in the country while his parents tested the environment abroad.

â€œIf I had been there, I would have been a hindrance to them,â€ he said. And so, James remained in China â€“ his parents on the other side of the world, thousands of miles away â€“ waiting patiently for their return.

In 1996, two years after theyâ€™d left, the Shens decided that they would stay in the United States and finally bring their son to America.

â€œI didnâ€™t know anybody when I came here,â€ James told me of his arrival to the United States. â€œItâ€™s a completely different language and culture.â€ Indeed, as James says with a hint of laughter, upon his arrival in America, he had never seen a black person. As a small boy confined to his tight Chinese culture, James had little knowledge of any people but his own â€“ not unlike myself.

But the move to America wasnâ€™t a completely shocking adjustment, he assured me. In preparation for his departure to the United States, James had taken English classes, expecting that he would sooner or later end up with his parents in America. As prepared as he was, life was still difficult for a foreign kid with a funny name.

Perhaps nothing prepared James more for his life in America than the simple fact that he was an immigrant â€“Â  he experienced and adjusted to a new and foreign locale, he met new people and learned to adapt. When James and I met at Northwestern, thirteen years after he moved to the United States, he and his family had lived in four different American cities, shifting from one town to another because of the nature of his fatherâ€™s job as a land developer.

â€œItâ€™s always difficult to adapt to a new environment,â€ he told me of the constant changes. But moving from China was certainly the biggest change, so James was well prepared to move between American cities.

In the summer of 2009, James returned to China after thirteen years of separation. He was part of a two-month study abroad program that brought him back to Shanghai. For one month, James stayed with the family he had left years before.

â€œWhat was it like returning to China?â€ I asked him when he got back.

â€œIt felt so good,â€ he responded, â€œseeing people that looked like me. You feel like youâ€™re part of that society. Itâ€™s weird when people in America ask you â€“ everywhere you go â€“ â€˜what country are you from?â€™ â€“ even though youâ€™re American. You donâ€™t get that in China.â€

Over the course of our year-long friendship, both James and I have grown in our understanding of other cultures, experiencing diversity together. Like me, James was born and raised in a place where neighbors looked just like neighbors, where the kid next door had the same skin color as the kid in the mirror. To be true, James experienced much more of the world than I did, emigrating from China and traversing across the U.S. in the course of a childhood. But we have much more in common than meets the eye.

Sure, I still snicker whenever he speaks to his parents on the phone. But Iâ€™ve learned that an immigrant isnâ€™t always a person entirely unlike myself. An immigrant, like James, can be just like me.