Generators, books and a changing life

[Read the companion story, Coffee with the Mansoors]

Life has changed in many ways since Emad Mansoor arrived as a refugee with his family in Chicago about a year ago. Among those has been the ease of having electricity in his home.

In Iraq, Mansoor and his family never had enough electricity to power their home for a whole day. â€œIf you are lucky, you will have electricity like six or seven hours a day, max,â€ Mansoor said.

He used to get up at 2 a.m. to run the generator, never getting a full night of sleep. A neighbor owned a large generator from which he sold electricity to Mansoor and other Baghdad residents. â€œIt was good business, in fact, excellent business.â€

Along with increased access to electricity, the Mansoors are experiencing an increased sense of safety. The situation in Iraq remains a dangerous one, making a return home more and more unlikely for Mansoor, 49, his wife Hala, 36, his mother and two young daughters.

One Sunday in October, their older daughter Tala prepared to celebrate her tenth birthday at a McDonaldâ€™s play place, a right of passage in the U.S. Little distinguishes them from other American kids, but as a parent, Mansoor is noticing that â€œthey are more open to societyâ€ than before. Their confidence has increased and â€œat least for nowâ€ they are not rebellious, Mansoor said.

The Mansoors attribute the change to American education. In kindergarten, Tania is learning the alphabet and how to read, and Tala is excelling at St. Mary of the Lake School. Not only is education better in the U.S., according to Mansoor, but Tania and Tala also have a chance to have fun in the classroom which â€œis not the case in Iraq.â€ 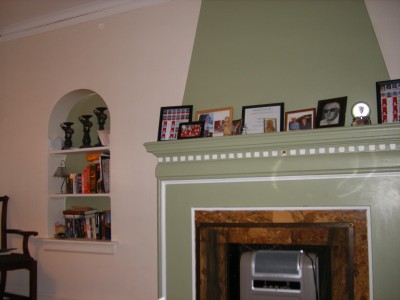 The Mansoors' mantel of memories

The mantel on the decorative faux fireplace in their north side apartment displays class pictures and awards for good grades. The sense of pride Mansoor has for his daughters was palpable in his words and visible in his smile.

Mansoor, who has a Ph.D. in chemical engineering, understands the value of education in oneâ€™s life. He worked for the ministry of science and technology in Iraq and also was a part-time lecturer at a university.

Getting a job in the U.S. has been tough, however. Employers are not willing to hire refugees because they donâ€™t understand what that status entails and â€œthey donâ€™t want to invest in someone thatâ€™s not secure,â€ Mansoor said. Through an old friend, he has found a job with a company that works on scar treatment.

Professionals relocating in the United States may struggle when attempting to re-enter their field here. Mansoor sought the help of Upwardly Global, an organization founded in 2000 that provides services to immigrants that are â€œfalling through the cracks,â€ said Kevin Jonke, communications and outreach associate at the Chicago office. Created to aid immigrants from developing countries like Mansoor gain access to high-skilled jobs, it offers workshops on resume writing, professionalism and workplace culture.

When not working, Mansoor immerses himself in literature, a passion that he has not lost in the shuffle of life.

At home, in the Al Mansour district of Baghdad, reading was Mansoorâ€™s joy. His personal library was vast and every Friday he would head to a book market on Al Mutanabi Street, named for a 10th century Arab poet. â€œIt was the joy of the week for me.â€

The street was devastated in March 2007 when a car bomb exploded, killing more than two dozen people and destroying many of its businesses.

Mansoor is rebuilding a library here and revels in going to a used book store. â€œI love the smell of books, especially old books, used books. I hate new books.â€

His love of books is shared by his countrymen. Thereâ€™s an old saying, according to Mansoor, that goes, â€œbooks are being written in Egypt, being printed in Lebanon and read in Iraq.

Memories of home have Mansoor and his family longing to be there, but they know they had to leave. Death was a too common of an occurrence that the whole family witnessed. His daughters were aware that many of his friends were killed. â€œNot one, many of them,â€ he said.

One day, Hala went out for groceries. She realized that she had forgotten carrots so she turned back to buy some from a street vendor. He was killed before she reached him.

Now the Mansoors are adjusting to life in Chicago. They are getting used to living in an apartment and realizing that people donâ€™t drop in at any hour of the day to visit. Mansoor is committed to adding to his new library, in both English and Arabic, ensuring that his daughters speak Arabic and learning to sleep through the night.