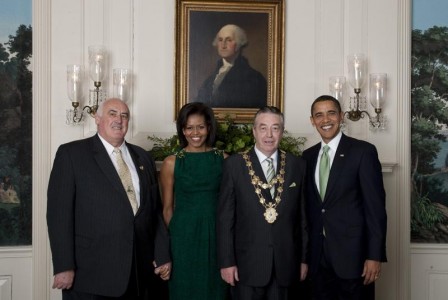 Billy Lawless (left) met at the White House with the Mayor of Galway, and President and Michelle Obama on St. Patrick's Day 2009

Billy Lawless may be the most American Irishman the United States has ever seen.

Planted on a barstool in the basement of his upscale Michigan Avenue restaurant, The Gage, the 58-year-old leans forward animatedly when he speaks of his America.Â  His necktie pops with stars and stripes and the words of the U.S. Constitution. His smooth Irish accent thickens as he becomes more and more excited, speaking of his love for his adopted city of Chicago and his work as the president of Chicago Celts for Immigration Reform.

But it wasnâ€™t always his America, not always his Chicago.Â  Lawless is a native of Galway, Ireland, and made a name for himself there as a prominent pub owner and spokesman.Â  He spent 20 years establishing himself as a businessman, and served as president of the National Licensed Vintners Association, also known as the Publicans, for two years.

â€œI got very involved with the machinations of associations,â€ he says.Â  â€œMust have been in my genes or something.â€

Those genes led him to become chairman of the local constituency of Fine Gael, the largest central right party in Ireland, and eventually to a bid for the Galway city council in 1991.Â  Lawless lost on the fourteenth count.

â€œWe have proportional representation, so you can vote for all of the candidates,â€ he explains.Â  â€œBut luckily I was beaten because if I wasnâ€™t I wouldnâ€™t be here now.â€

In January 1998, Lawless acted on a recurring urge to move with his wife and four children to the United States.Â  He sold his Galway business and immigrated on an E2 entrepreneurial visa.Â  He did it â€œfor a challenge,â€ he says.Â  â€œI wanted to see what you Yanks were like.â€

After checking out New York and Boston, he settled in Chicago.Â  â€œIt just blew me away,â€ he says.Â  â€œItâ€™s a very underrated, beautiful city.â€

Six months later, he opened The Irish Oak, a pub in the Wrigleyville area, and soon became a figurehead for pub owners, and a man to know in Chicagoâ€™s Irish community.Â  That was how immigration activism fell into his lap.

AUDIO: Chicago has more undocumented Irish than you think[audio:https://immigrantconnect.medill.northwestern.edu/wp-content/uploads/2009/12/Lawless-Irish-first.mp3]

â€œI was involved here because I set up the Irish pub owners in Chicago,â€ he says.Â  â€œAnd then all of the undocumented would have known me, especially on the North Side because I own the Irish Oak.Â  So they all would have visited me, met me, known who I was.Â  It came from the grassroots.Â  Would I lead them, lead the fight for them?â€

He would, becoming the head of Chicago Celts and expanding his involvement to the Illinois Coalition for Immigrant and Refugee Rights.Â  Since 2005, Lawless has worked with legislators, lobbying for reform that would provide undocumented immigrants with a path to citizenship and strengthen U.S. border control.

â€œThere are 12 million [undocumented] people, and theyâ€™re not going to deport themselves, and we canâ€™t deport them,â€ he says.Â  â€œItâ€™s physically impossible.Â  So bring them out of the shadows.â€

In the Irish community, Lawless says many of the undocumented are under 40 and single.Â  Through the Irish Oak, heâ€™s seen heartbreaking stories of undocumented youth unable to reconnect with their families for fear of being discovered.Â  He remembers a young man who couldnâ€™t accompany his brotherâ€™s remains back to Ireland.Â  Another young man, a successful businessman in the U.S., learned that his parents had died in Ireland, but couldnâ€™t go back for the funerals because he would not be allowed re-entry into the United States.

â€œAnd it ate at him so badly that he eventually returned about two years after they died,â€ Lawless says with a sad shake of his head.Â  â€œThe man was just distraught.”

AUDIO: Hard to imagine how traumatic that can be[audio:https://immigrantconnect.medill.northwestern.edu/wp-content/uploads/2009/12/Billy-Lawless-cue-2.mp3]

Lawless says his work with the umbrella ICIRR has allowed him to see the need for reform throughout other ethnic communities as well.Â  â€œThe Irish, itâ€™s mostly young people, but you take the Hispanics.Â  They take mothers and fathers and their young babies are left in care and they donâ€™t see them for months and months and theyâ€™re deported.Â  That is not humane.Â  That isnâ€™t what this country was built on, I can tell you that.Â  Not the one I believe in.Â  I believe in the land of the free, the land of opportunity, the land of immigrants, but by god not in the last ten years.â€

This struggle for immigration reform has brought Lawless full circle.Â  He now serves as a kind of ambassador between young undocumented Irish in Chicago and their families at home in Ireland.Â  Now a green card holder, Lawless keeps a home in Galway and goes back about twice each year, working as the vice chair for the Chicago/Galway sister city committee.Â  In September he returned to his hometown with a group of legislators, whom he introduced to his friend Enda Kenny, the leader of the Irish opposition party and, Lawless hopes, the next Prime Minister.

â€œI do a lot of radio work because people want to know what their sons and daughters are doing,â€ Lawless says.Â  â€œI did about ten local radio interviews, just asking the parents there to put pressure on their own reps in Ireland to put pressure on the U.S. government.Â  Itâ€™s all about putting pressure to get their sons and daughters who are undocumented to come out with us.Â  And to call their senators here and our congressmen.Â  Because a lot of people feel itâ€™s all over, we wonâ€™t get it.”

AUDIO: There’s a lot of junk out there[audio:https://immigrantconnect.medill.northwestern.edu/wp-content/uploads/2009/12/Lawless-not-what-countrys-about.mp3]

Lawless hopes President Obama will prioritize immigration reform legislation, which is set to surface in Congress in January.Â  Now more than ever, he sees life for the undocumented becoming even worse in Chicago because of the current economic climate.

â€œIf people canâ€™t put food on the table, well my god what do you do?â€Â  he says.Â  â€œEverybody has to be able to live, and I thought thatâ€™s what this country really stands for.Â  For me thatâ€™s what it stood for.Â  But letâ€™s hope that I have at least some small part in changing it.Â  Iâ€™m proud that Iâ€™m part of trying to resolve this undocumented question.Â  And Iâ€™ll be most proud when itâ€™s resolved.â€