Lily Ayman: The mother of the Persian textbook 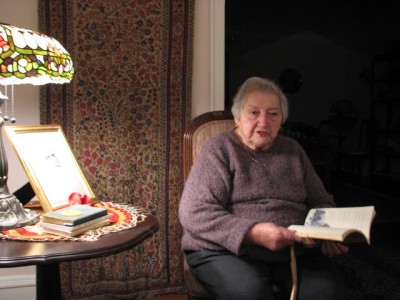 [Listen to the companion audio story “Lily Ayman: The threat of being executed seven times“]

Lily Ayman once heard from an Iranian visitor that the revolutionaries in Iran demand that she be executed seven times.

Sitting serenely in a room in Hyde Park filled with Persian rugs and photographs of her family, she chuckles at the prospect.

Click here for AUDIO: What a stupid thing to say!

It is clear that Ayman loves the country whose government ultimately condemned her. She explains how the revolutionaries denounced her efforts to modernize Persian education. Indeed, the crowning triumph of Lily Ayman quickly turned to treason after the Iranian Revolution.

Ayman was the first and only woman who was a member of the High Council of Education in Iran. In 1959 she was a part of an educatorsâ€™ group that was sent abroad in preparation to write new textbooks for the children of Iran. They studied American textbooks intensively at Columbia University, then went on to France and England to compare the teaching materials of the world.

At the end of their stay in the United States, a publisher asked the group which book they would adopt for translation into Persian.

â€œNone!â€ she recalls them saying with one voice. Though they’d never discussed the question, they looked at each other and nodded with understanding. These were American books, for American children. The children of their homeland would need something different.

Upon their return to Iran, they worked diligently for a year to create a set of textbooks for elementary school children. Ayman remembers their work proudly.

â€œIt was the first time in Iran that textbooks came out with teachersâ€™ guides,â€ she said. â€œWe traveled all over Iran with seminars for teachers, working with them [on] the methodology. There had been no previous efforts to teach methodology before. To put the emphasis on creative reading, creative writing, this was all very new to them. Before the emphasis was all on memorization.â€

In the readers, stories came from an array of sources; folktales, fables, and stories from other cultures, and religions, stories of life in the Â cities and the countryside. Language exercises followed the stories. They asked the students to think and to react to them. These textbooks were used all over Iran. Even the Crown Prince used the books to learn to read.

These textbooks brought a tremendous change to the education of children in Iran. The reading ability of children progressed tremendously, so that from the end of the 2d year children were able to read any book written for their age group. Iranian children learned to satisfy their curiosity by asking questions and reading books.

A few years later on a Teacherâ€™s Celebration Day, Ayman heard on the radio that she was to receive a prize from the Shah for her work. She would never receive the medal. Political change happened quickly. Only a short time later, government authorities were demanding her death.

The revolution came about sixteen years later, in 1978. Two years after the cataclysmic event, they began to alter the textbooks. They took some texts out: all emphasis on Persian culture, anything political, any mention of the Shah, any non-Islamic texts.

â€œIn the backs of each of the books, school books, there are pictures of the Shah and the queen. Well thatâ€™s not my fault. I didnâ€™t put them there,â€ she says. Then gradually, she notes, they added propaganda encouraging anti-Israel sentiments and militarism in general.

Worried sick over the growing might of the revolutionary powers, the Aymans sent their young son to live in America where his sisters were studying. Their own migration was an accidental byproduct of visiting him there.

After coming to Chicago for a visit, the Aymans soon realized that it would be impossible to return. It was 1979, and after much warm-up, the Islamic Revolution had truly escalated. Family friends were executed for any involvement with the Shahâ€™s government. Lily Ayman was put on a blacklist. She would never see Iran again.

â€œI miss my people. I miss going out and being able to speak to anybody in Persian. I miss small things, the whole atmosphere! You cannot comprehend that, and I hope you will never have to,â€ Ayman says. â€œYouâ€™re like a plant that has been taken out and put in a very beautiful lovely vase. But itâ€™s not in your own soil. Thatâ€™s kind of the feeling one has.â€

After the shock of relocating to a new land, Ayman immediately began to write books again, this time for a new group of children. She published three books, including a collection of Persian lullabies, nursery rhymes, and and games, to be used by young parents. She did not aim for profit. â€œTheyâ€™re a gift to the children,â€ she says.

Coming from her own experience of being uprooted, Ayman stresses the importance for Persians of keeping their cultural identity, â€œI always urge the families, ‘keep the language alive, the love of Iran alive. Play Persian music at home, keep photos of different sites up.’ So they will know what their roots are. As time goes by, the more difficult it becomes. Now, we’re starting the third generation of Iranians in U.S. Everywhere! We’re scattered all over the world now.â€

Click here for AUDIO: Don’t melt, be a salad

She does her part to pass on her traditions. Her five grandchildren spoke only Persian until they started kindergarten. After a few years of acclimation to English, she began teaching them her specialtyâ€”reading and writing Persian.

For a few years, she taught Persian at the University of Chicago, and added the methodology of teaching adults to her repertoire. Everywhere she goes, she gives seminars on transmitting Persian culture, teaching the language, teaching the values. In 2010, she will travel to London to give another speech. She receives all sorts of recognition, from the medals of her earlier days to personal emails and letters that she cherishes moreâ€”messages of heartfelt thanks from her readers all over the world.

After all these years, she retains a deep love for her people and her heritage. She has strong hopes for the freedom of her country. She has lived in five countries now, doing work with a few charitable organizations.

But in the end she admits, â€œI still love to work with children.â€