Seventeen days later, they were married.

â€œWe met for the first time in the airport,â€ says the 28-year-old native of Kerala, India. â€œI was practicing myself in the mirror, how to greet her. I was very nervous. If we were alone it would be fine, but her whole family came together on the plane. So I knew that everyone would be looking at our faces.â€

Six months earlier, Harris was working in India as a software engineer, not looking for a girlfriend or a wife. At the suggestion of his priest, Harris and his parents looked at a few e-mails from Indian girls ready to get married. Harris looked at three and wasnâ€™t interested. Then, he received an e-mail from an Indian-born girl in Des Plaines, a suburb of Chicago. Her name was Josephina, and somehow George knew she was different.

â€œWe canâ€™t judge people [by how they look], we canâ€™t see people as they are. So one thing I always keep in mind is spirituality,â€ says Harris. A devout Catholic, Harris was looking for a partner who shared his faith, so Josephinaâ€™s indication that she was Catholic put him more at ease.

â€œTo trust someone is very difficult,” he says. ” I decided because of the spirituality she put on her profile, I decided to forward her proposal.â€

The first time they saw each other, it was via Web cam. Flanked by his parents and siblings, he smiled at Josephina from his home in Kerala. Roughly 8,820 miles away, Josephina smiled back, with her mother and brother in tow.

Arranged marriage is a long-standing tradition in India, and the final decision on partners is made by the parents or by the couple with their parentsâ€™ blessing. This latter form is often referred to as a â€œlove marriage,â€ and the idea of parental approval is typically still very central to the union.

â€œI like English movies, but I had a kind of presumption, a kind of image in my mind of how people are living in the U.S., but it doesnâ€™t match with Indian culture,â€ says Harris, describing the moments leading up to their initial chat. â€œAnd marriage is all about deep union, right? So I think if there is a mismatch, it wonâ€™t work. I was a bit doubtful about whether it would work or not because she is a U.S. citizen. She was brought up in the U.S., but I set aside all those things.â€

That first encounter, they spoke for about 30 minutes, mostly about formalities. At the end, their families left them to talk for a few moments alone. Harris liked her immediately, but wanted to take time, maybe weeks, to make up his mind. â€œItâ€™s not normal to happen like that, usually you make your decision within a few hours,â€ he says. His parents wanted him to decide upon the engagement right away, but Harris resisted.

â€œI called her and she was sleeping, because itâ€™s like a 16-hour shift from India, and I told her â€˜I like you,â€™â€ Harris explains. â€œAnd I ask â€˜what about you?â€™ She said â€˜I like you too.â€™ And I say that we need to make a decision.â€

But they didnâ€™t, not quite yet. â€œSo we decided to spend a lot of time, maybe a few weeks, deciding,â€ he recalls. â€œSo every day I sit on the mobile phone and talk to her for hours and hours.â€

Over the phone, they got to know each other better.

“I loved the way she expressed herself,” he says. “She was so cute, so innocent. I didnâ€™t find any kind of hidden things. She was so transparent.â€

It took one week for them to decide to get married. The wedding was set for six months later, so every day after that, they spent hours on the phone, talking about anything and everything. One day, Harris recounts, they spoke for nine hours.

â€œI knew everything she was doing,â€ he says. â€œWhat dress she wore, where she walked, every single thing.Â  She would say, â€˜I am eating a burger, itâ€™s cold out there, I see a dog.â€™ It was like I was almost with her. We were apart but our minds were so close, we didnâ€™t keep anything from each other.â€

So although George Harris hugged his fiancÃ©e for the first time in a crowded Indian airport, just weeks before they would be married and he would immigrate to the United States, heâ€™d known her for what seemed like a lifetime.

â€œAnd itâ€™s like that now,â€ he says. Harris has been in the United States for five months. â€œI am so happy that someone knows me so much.â€

Since the day they were married, George and Josephina have not spent a single night apart. George is acclimating to life in America. Although he misses his family in India, he loves life in the United States. â€œThe best thing I love is the people in America are straightforward,â€ he says. â€œIf they say yes, they say yes. If they say no, they say no. There is no pretending. They wonâ€™t mask. If they love someone they will say ‘I love you,’ otherwise they wonâ€™t say it.â€

Together, he and his wife volunteer for several Catholic charities, and are busy caring for their first child, a girl named Therese born in December. 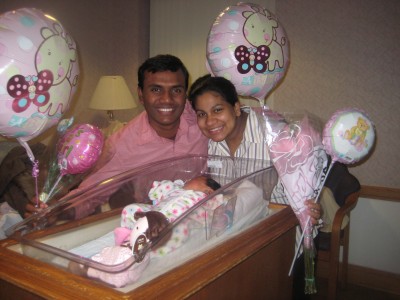 â€œShe is a gift from God and the fruit of our love for each other,â€ Harris says. The three live with Josephinaâ€™s parents, continuing the close-knit family unit George left behind in Kerala.Â  He came to be a part of Josephinaâ€™s life in the United States, but says she fit perfectly into his.

â€œMy goal in life is not to make lots of money or become famous,â€ he says, â€œbut to do something good, and she was excited to be part of that life.â€