Life without journalism for Congolese immigrant

[Read related story on Ngoma, “Running for his life“]

Achille Ngoma has been interviewed twice since coming to the United States from the Congo. Both times, a 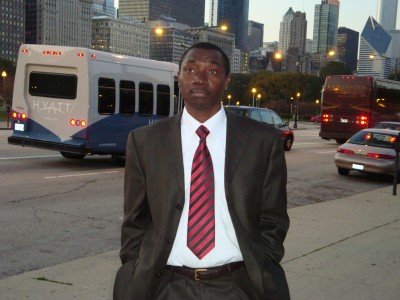 college student has asked the questions and crafted a story from his responses. Both times, Ngoma has ached to be the one asking the questions.

â€œEvery time I see somebody anchoring, reporting, videotaping, I just think about myself doing this back home,â€ Ngoma says.

Journalism started for Ngoma as a boy sitting next to the radio while the man on the other end described a soccer match. Ngoma wanted to open the radio up to find the man inside but his father told him that the man wasnâ€™t really there. His voice had traveled to them on tiny waves from the capital city, where the man was really speaking. Ngoma liked this.

â€œOne day I told my father I wanted to be like this guy speaking on the radio,â€ Ngoma says.

Years later, Ngoma started attending Marien Ngouabi University, studying in one of the best journalism programs in the country. It was his voice and face traveling to TV sets across the country. He anchored, reported and produced for public television. He also worked part-time as a Spanish teacher in a local high school. There, Ngoma watched as his students spent their afternoons smoking, drinking and hanging around, not studying or thinking about school. There needed to be a way to get young people motivated and thinking, a thread to connect young Congolese to the country and its future, Ngoma thought.

â€œI saw too many young people [who] were lost,â€ Ngoma says. â€œI tried to figure out something to keep them focused on their lives and on them doing something better for school and family.â€

Public television had never really been a place for teenagers in the Congo. They watched TV for music programs but turned it off after that. It was there on public TV, however, that Ngoma saw the opportunity to break the apathy. As part of Planete Jeunes, meaning â€œYouth Planetâ€ in French, Ngoma produced shows about issues affecting teens. He talked about the lives of the children of military parents, about HIV, and, in his most important episode, he organized a â€œnight for peace.â€ To Ngoma, it was an invitation for teens to say no to politicians, who had coerced teens to fight in the 1993 civil war, in which supporters and opponents of the government battled each other after disputed parliamentary elections.

â€œThe problem is the government and the politiciansâ€¦They just use the youth,â€ Ngoma says. â€œIf they need[ed] our young people to be educated, they wouldnâ€™t want to get involved in bad stuff. They are trying to do everything to keep these young people like lost people.â€

Ngoma was doing something that had never been done before. He was bringing teenagers, parents, psychologists and even national directors together in one room to debate, while on Saturday afternoons, in living rooms across the Congo, parents, teens and the countryâ€™s decision-makers watched.

â€œThey [viewers] called usâ€¦ and they said, â€˜This is very interesting. We have been watching the only TV for politics, only for stupid stuff. This is really good.â€™â€

Meanwhile, having passed his written examination, Ngoma was working to complete his thesis in order to earn his masterâ€™s degree. A politician and opponent of the government, however, Ngomaâ€™s academic advisor did not want to sanction a journalist who, through his work for public TV, had worked for the government. In the two years that followed, Ngomaâ€™s advisor delayed accepting his thesis by sending him on an endless string of revisions, Ngoma say.

Everything changed. Abruptly, Ngoma had become a target. He had worked briefly as a press officer for Lissouba, and now the Sassou militia was tracking down and killing peoplewho had served in the Lissouba government. After two years of staring out at viewers from the screen, Ngoma could easily be recognized.

Ngoma went into hiding. With his money dwindled, he stayed in the Congo for several years before fleeing to Gabon with his family. There, Ngoma was a refugee, and he worked first by teaching Spanish and French, and then,in his last three years, working for different news agencies.

Nine years later, Ngoma came to the U.S. as a refugee. Heâ€™s been here, living in an apartment in Rogers Park, for three years, and he is now a permanent resident. He expects to earn citizenship status in the next two years.

Ngoma works as a mini-bar attendant at the James Hotel, a luxury hotel near the Loop. He checks guest rooms to make sure everything is okay in the bar, charges guests for what they had, replaces items, assures quality customer service.

â€œI like it for now because I need to survive,â€ Ngoma says.

To Ngoma, the key to practicing journalism in the United States is going back to school. Starting school, however, requires getting a transcript from his university in the Congo, and that means accessing one paper amidst piles of other paper in a non-computerized system and going through a hostile government.Â  He also doesnâ€™t have the money for schoolâ€”he needs a cheaper option. At the most basic level, as Ngoma grasps at a new language and culture, he is forced to relearn everything.

“I need people to advocate for me,” Ngoma says. “Look at this family. I need to take care of this family. I’m not going to work in the hotel for twenty more years.”

Now, Ngoma absorbs journalism in the United States. The Chicago Sun-Times is his favorite newspaper, and he likes watching WGN, CNN and MSNBC.He doesn’t like the advertisements which disrupt the news in two-minute bursts, unlike in the Congo, where they come only before and after the news, not between reports. Live coverage, whether of soccer games, congressional meetings or accident scenes, fascinates him. In the Congo, he says, stations rarely have the technology to report live.

â€œCBS has a lot of reporting vansâ€¦ They can go somewhere, lift up the antenna and start reporting like that,â€ Ngoma says. â€œIn the Congo, I would videotape and then go back to the station.â€

On afternoons and evenings when he is home, Ngoma also watches football games, and to him, the sportscasters are ingenious, knowing all the football terminology and able to explain any action. In his living room, in the glow of a game, Ngoma looks back on the little boy trying to open up the radio to find the sportscaster inside.

â€œItâ€™s like remembering a dream I couldnâ€™t achieve, but I became a journalist,â€ Ngoma says. â€œJournalism is my life.â€