[read the story in Spanish as published in Extra]

Crusaders will soon descend upon the community of Little Village, armed with cans of spray paint and posters to cover the walls of this Chicago neighborhood while its neighbors are sound asleep. These people arenâ€™t vandals who seek to deface the cityâ€”itâ€™s a city, in fact, that these crusaders care deeply about.

They are members of Enlace, a well-known non-profit organization within the community, working to encourage members of the Little Village neighborhood to fill out their Census forms in the upcoming 2010 U.S. Census. Their mission is to catch their fellow community members by surprise through a guerilla advertising campaign.

Enlaceâ€™s late-night adventure will involve the plastering of paper hands â€“ the symbol for next yearâ€™s Census â€“ throughout the community before spray-painting messages across them to raise awareness of the Census and encourage community members to participate.

Enlaceâ€™s campaign, called â€œLa Villita Cuentaâ€ â€“ or Little Village Counts â€“ is one of many campaigns throughout Illinois and the U.S. that seek to increase the number of people counted by the U.S. Census Bureau next year. Historically, said representatives from Enlace, Little Village has been less than 50 percent counted.Â  Darhiian Espinoza, Enlaceâ€™s Economic Development Director and head of the â€œLa Villita Cuentaâ€ campaign, estimates the neighborhoodâ€™s true population to be around 120,000.

The Census is critical for communities like Little Village, Enlace argues, because inaccurate counting can result in a drastic loss of federal finances. Census data is used to distribute over 300 billion dollars in federal funds, and even more in state funds â€“ money that means everything to a community like Little Village, where resources and opportunities are not up to par. Basic amenities like roads and schools are in dire need of repair, Espinoza said, and people in the community know this.

“We have to pitch it to them correctly, otherwise theyâ€™ll shut down,” said Espinoza.Â  â€œWe want to throw numbers at them, but not numbers so large that it becomes unbelievable. So thatâ€™s a little bit of a tricky one.â€

So if the benefits of being counted are so good, why the hesitation?

â€œOn some level, the lack of being counted is really a reflection of apprehension, of fear, of true crimes that have been committed to individuals who are undocumented here,â€ said Dia Cirillo, Acting CEO of Enlace. These are issues Enlace has taken seriously in its formulation of campaign strategies, she said

â€œOne of the things that will make people feel more compelled is our story,â€ said Espinoza. Formerly known as the Little Village Community Development Corporation, Enlace is a nearly two-decade-old organization well-known in the community for work theyâ€™ve done on a very personal basis with community members. The people of Little Village, Enlace hopes, know them well enough to lend some trust.

Like Enlace, the people of Little Village care deeply about their community. A prominently Hispanic neighborhood nestled in the mid-west side of Chicago, Little Village is full of gathering places â€“ a bread shop, a favorite restaurant, a living room, and most commonly, the front porch.

Families get together in Little Village, said Espinoza. â€œYouâ€™ve got half-a-block at someoneâ€™s house on their front steps chatting it up for the purpose of chatting it up,â€ he said.

This close tie between community members in Little Village is a quality Enlace plans to utilize in its efforts to publicize the Census.Â  The organization considers the prevalent neighbor-to-neighbor dialogue one of their most valuable assets.Â  However, the organization fears that this open forum for discussion could work against them if people spread the message of â€œOh, donâ€™t believe the Census, itâ€™s a load ofâ€¦ good stuff,â€ said Espinoza.

Enlace isnâ€™t tackling the Census alone, however. They are collaborating with Latinos Progresando, another non-profit in the Little Village community, and have established unofficial partnerships with nearly 20 other organizations.Â  Indeed, Enlaceâ€™s efforts are part of a greater statewide campaign, called Count Me In, a collection of 60 non-profits all set out to increase the population count in Illinois communities. 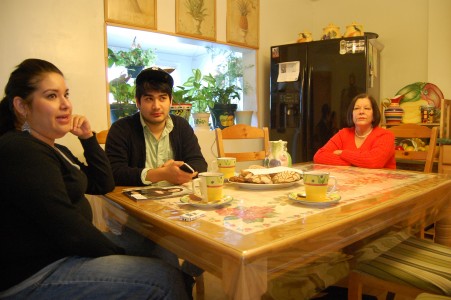 For Enlace, the focus remains on Little Village. In addition to the neighbor-to-neighbor campaign, Enlace is trying to incorporate their Census work into current programming.Â  They have already used their community schools program, which conducts after-school programming, sports and extracurricular activities, to familiarize people with the upcoming Census project. â€œWeâ€™re going in there and presenting them with information that we think is needed for them to feel comfortable with filling out their Census,â€ Espinoza said

In an effort to time the campaign perfectly, Enlace plans to start a concentrated campaign in early January. The organization is already arranging a concert â€“ part of a kick-off party in January before directing its focus to the neighbor-to-neighbor campaign.

Ideally, Enlace and other community members will inspire a shift in thinking that provokes Little Village residents to fill out their Census forms.Â  One of the most prevalent roadblocks Enlace and other Census proponents face, however, is fear and mistrust in government, especially by older generations.

â€œI think weâ€™re in a point in our society â€“ society as a whole â€“ where weâ€™re kind of split,” Espinoza said. â€œA lot of the young people are feeling inspired politically and feeling that their voice does count, as well as a lot of older people. Itâ€™s just a lot harder for older people here to find that trust in the political system which they think failed so many times.”

Espinoza, along with many other members of the community, believes the neighborhood’s fear stems from a â€œraidâ€ that took place at the 26th Street Discount Mall a few years ago. Espinoza called it the “cherry on top” of the fear people already had, “just in case people didn’t already mistrust the government,” he said. The store was raided by ICE with what appeared to be machine guns, Espinoza said. â€œThe fear that you saw in peopleâ€™s eyes and the immediate sense they got that they were coming out for all of us… that kind of puts fear in a lot of peopleâ€™s hearts. Itâ€™s not being counted and having someone know where you live â€“ youâ€™re not signing up to let everybody know where you live. I think that plays a big role.â€

Suzana Arambula, a 33-year-old elementary school teacher and life-long Little Village resident, said the fear in the community is real. Although she has no problem filling out the Census, she recognizes that many community members know fellow residents who are undocumented or have undocumented family members living in the same home.

“People start thinking if we fill this out and it’s five of us living here and they check and see who has social security cards and everyone else doesnâ€™t, families start splitting apart,” said Arambula. “With all these things that are happening in the news with immigration, my opinion is that this is one of the biggest reasons people donâ€™t want to do it,” she said.

Keeping this belief system in mind, Espinoza said that Enlace is trying to educate Little Village on these political matters and convince them that the information they volunteer in fact cannot be shared with any other governmental agency.

Enlace hopes to take an approach that helps the community understand they are all coming from a similar mindset. “Thatâ€™s the approach weâ€™re trying to take,” he said. “Not just me telling them, but their sisters telling them, and their cousins, and their grandmothers â€“ make it something the community at large is aware of and can vouch for,â€ Espinoza said.

Hesitancy to take part in the Census isnâ€™t limited to the Hispanic community in Little Village. Other ethnic communities face the same problem of undercounting.Â  â€œWhether it be that youâ€™ll get deported or that you havenâ€™t been paying child supportâ€¦[there is a belief that] theyâ€™re going to find you. You know, itâ€™s all fear of one thing or another,â€ Espinoza said.

This lack of knowledge and interest in the Census will be a primary challenge to Enlace as they move forward. Even Arnold Cavazos, a 25-year resident of Little Village and a friend of Enlace’s since the organization’s inception, is unfamiliar with the significant impact the Census could have on his community. “If we’re all counted,” Espinoza tried to explain to the 62-year-old, “we can create more jobs, we can fix our roads.”

The former rodeo farmer said he will fill out his Census forms, as he has in the past, but believed other people in the community will almost certainly be hesitant – a result, he claimed, of the neighborhood’s heavy undocumented population. People who have their papers will be uncomfortable, Cavazos said, because “their in-laws, their brothers, their sisters, their moms, their aunts – they do not [have papers], and they’re going to hold back.”

There are plenty of reasons why community members might be hesitant, Arambula agreed. “Maybe they think it’s a hassle to fill out the paper work,” she said, “or maybe a lack of interest in what’s going on. Or maybe the government doesn’t do much for the community, so what’s the point in filling it out?”

Despite potential setbacks, Espinoza and Enlace are ready to push through. The facts, they believe, are on their side, and the arguments are hard to defy. Arambula, for example, the mother of a small child, reacted very positively to the idea that a higher count could mean more money for education. “I would love for the money to go to schools around the area,” she said, “because there are so many kids around here and that would benefit them the most.”

Discussions like these – where members of the community realize that filling out their Census forms will have direct impacts on their personal lives – are exactly the type of discussions that Enlace hopes to be having with every person in Little Village in the coming months. Considering his upcoming battle, Espinoza seems optimistic with the Little Village community.

With Little Villageâ€™s sense of community behind them, Enlace is set to ensure the cityâ€™s rightful share of funds is received. “This is in part our money,” Espinoza said. “Let’s bring it back into our community and help our community prosper.”