Two Indian communities join to take on the U.S. Census

The Indo-American Center just off Devon Avenue has been ready for the 2010 U.S. Census for months, not wanting to overlook any opportunity to get the attention of the areaâ€™s large Indian community. When the census forms are mailed in March, they hope the area will be properly counted.

Santish and Mira Chander noticed a display when they were at the center the Wednesday before Thanksgiving for a special celebration. A large room towards the back of the center was strung with holiday lights and colorful strands 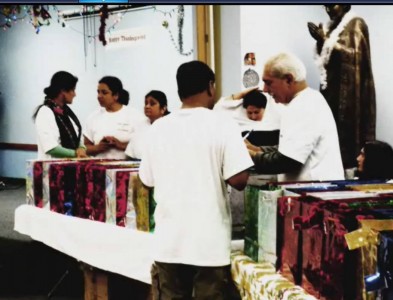 of garland. Tables stood ready for heave loads of Indian food while rows of shiny gift bags awaited to be distributed by the Indian Community of Niles TownshipÂ  among the senior citizens.

It was the first Thanksgiving, the Chanders said, for many of the Asian Indian senior citizens for whom the celebration was held. The Indian Community of Niles Township, to which the Chanders belong, helped the Indo-American Center host the event which was about more than food, song, and celebration. In the small entryway of the community center, two census pamphlets were displayed, and the dayâ€™s talks were sprinkled with announcements on the census. The Chanders thought the event introduced important information to senior citizens, some of whom are new to America, face language barriers and are unfamiliar with the intricacies of the census.

The Asian population of Cook, DuPage, Kane, Lake, McHenry, and Will counties was estimated by the 2008 American Community Survey to be 493,363. However, community activists worry that although certain Asian communities are being appropriately counted, other areas are undercounted. With the 2010 U.S. Census quickly approaching, community organizations such as the Indo-American Center and the Indian Community of Niles Township are collaborating to ensure everyone is counted.

“In general, the U.S. Census is valuable but widely misunderstood,” Santish Chander said.

Sohan Joshi, an accountant who immigrated to the United States 28 years ago, said he thinks many people don’t fill out the census forms because they’re not legal immigrants. Publicizing their name and address to the government is frightening to them, he said.

Still, the Asian Indian community in Niles Township doesn’t have a hard time getting its members to fill out census forms and is thus properly counted, said Usha Kamaria, president of the Indian Community of Niles Township. Active in Chicago area communities for 20 years, she worries that the Indian community around Devon may have difficulty, though, due to notable differences between the Niles and Devon areas.

“The Indian community in Niles is very involved in the political process,” said Kamaria, citing her election as trustee of Niles Township in 2001, a position she held until 2005. She said her election mobilized the community, making it more likely to be informed on matters such as the U.S. Census. “As long as you give (Indians) a reason (to fill out the census forms), they’ll do it,” she said.

Santosh Kumar, executive director of the Metropolitan Asian Family Services, added that while the Asian Indian community in Niles is more likely to be integrated into mainstream America, the Asian Indian community around Devon is likely to includeÂ  recent immigrants who face language barriers, especially among its senior citizens. Kumar, who is on the U.S. Census 2010’s official Complete Count Committee for the Rogers Park area, said the Indian community west of Ridge Blvd. is “severely undercounted” in population estimates, though she couldn’t approximate the number.

Joshi, a Devon community member, agreed that Niles is a politically active community. However, according to him, that may not necessarily translate to U.S. Census forms being filled out. Joshi doesn’t think the Devon area faces any problems different from any other ethnic community, including Niles, in getting people to fill out the census form.

Joshi, who was in the United States for both the 1990 and 2000 censuses, couldn’t say whether he filled out the forms. Since he’s often working, he couldn’t recall if anyone came to his home to discuss the census, citing the importance of community activists in ensuring cooperation.

Kamaria said many people don’t know why the census matters, and that in general it needs to be better explained. Even she expressed uncertainty about how the census would affect illegal immigrants who choose to fill out the forms and whether illegal immigrants or students are even supposed to fill it out.

According to the Census website, “the Census Bureau is mandated by the Constitution to count everyone who lives in this country, regardless of immigration or citizenship status” and “does not ask about legal (migrant) status of respondents in any of its survey and census programs.”

Events like the Thanksgiving celebration held at the Indo-American Center are important in getting out information about the 2010 U.S. Census to communities and answering such questions. These organizations are imperative in reaching people such as Khadananda and Dhanmaya Phuyel, refugees from Bhutan who have only been in the U.S. about four months. The first time the Phuyels heard about the census was at the community center.

Mira Chander recalled being impressed when she visited the center by a young attorney who announced he would make himself available on Saturdays to help people fill out their census forms.