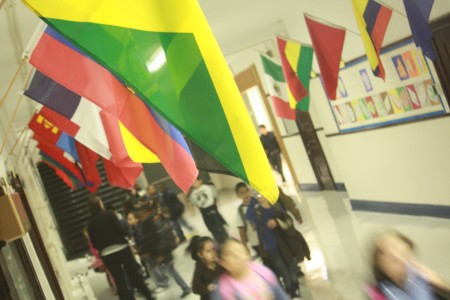 A hallway in Chicago's George B. Swift Specialty School, where over 40 varieties of "mouth-noises" can be heard every day among the largely foreign-born student body.

It was Tuesday afternoon again. To me that meant only one thing. It was crunch time. Nervously, I sank my teeth into my chubby pencilâ€™s pink eraser end.

Like the rest of the Young Einsteins in Mrs. Boydâ€™s first-grade class, I found our one afternoon per week of designated writing time to be an emotionally taxing affair. How were my stories, the modest inventions of a mind that had yet to experience life outside of cushy Scottsdale, Arizona, supposed to compete with the inspired, otherworldly concoctions of my fiction-writing predecessors? My delicate seven-year-old neuroses just couldnâ€™t take that kind of pressure.

So when a loud sigh of frustration emitted from one corner of the classroom, I raised my small precocious head in annoyance and sent a sidelong glare toward the derailer of my train of thought.

There stood little Natacha, a quiet girl with brown eyes, at our teacherâ€™s desk, tugging on both of her dark-blonde braids. â€œI know it in French,â€ she whined to Mrs. Boyd. â€œAnd I know it in German. I just donâ€™tâ€¦ I donâ€™t have that word in English!â€

I stared at her.

Natacha had announced to us on the first day of school that the reason she was special was because she had a German mother and a French father. She had also, I recalled, boasted to us that she was born in Europe, some unheard-of land so far away it may as well have been imaginary. But the idea that Natacha and her family were different from us somehow, that they were foreign, dissolved completely later that same day. Natacha turned up her nose at the tray of broccoli they handed us in the lunch line; she carried a backpack with Disney princesses on it, and she wore those translucent plastic jelly sandals that enjoyed such an intense popularity with the crayons-and-safety-scissors set. Ever since that first day she had been, quite simply, just like the rest of us.

Natachaâ€™s mom and dad, from what I knew, were like any other mom and dad, too. It was true that unlike the rest of our tan, golfing parents, they smoked. Natacha had chosen to announce this during an impromptu lecture about the evils of tobacco, clearly ruffling our typically unflappable teacher. And it was true that they took Natacha away for Christmas vacation to go skiing in Switzerland. But for the most part, they picked up and dropped off their daughter from our elementary school just like all the other parents; they signed all the same permission slips and came to all the same parent-teacher conferences that my own parents did.

As I watched Natacha grow increasingly frustrated with her quest for the right English word that afternoon, my imagination struggled to picture my perfectly ordinary classmate and her perfectly functional set of parents actually speaking in mouth-noises to each other at home. It was like trying to picture myself making Chewbacca sounds at the dinner table, and then having my parents calmly respond in the same gurgling snarl. Natacha and her parents had just seemed so normal up until this point.

It dawned on me suddenly, though, as I surveyed the classroom: Natachaâ€™s family wasnâ€™t the only one. Small blonde Maria from Chile â€“ hadnâ€™t her parents spoken to each other in something unintelligible when they chaperoned a field trip once? And hadnâ€™t little Brandon Chavez mentioned that sometimes when she was frustrated with him, his mother spoke Spanish?

My eyes widened as the world around me shifted, ever so slightly. Maybe these mouth-noises that werenâ€™t English werenâ€™t just mouth-noises; maybe whole groups of people, even whole countries could understand them. And perhaps even to some of these people who spoke mouth-noises, the language I was speaking sounded like mouth-noises!

I removed my pencil from between my teeth, and I began to write.