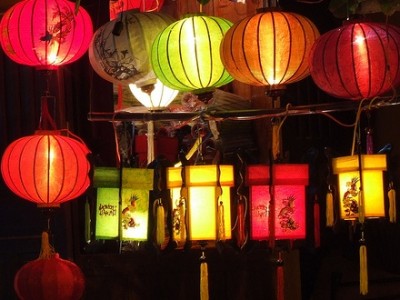 Dozens of bulbous lanterns dangled from the ceiling, vibrating in tandem with the rapid chatter of upwards of 80 Vietnamese senior citizens who crammed the dining area of the South-East Asia Center the way avid Packers fans crammed Lambeau Field at Brett Favreâ€™s “last” game.Â  Bamboo lined warm walls of the center, and flyers saturated with Vietnamese characters proliferated throughout the building. Â I grew up in a small town in Wisconsin with a negligible Asian population; therefore, like the culture surrounding Green Bay Packers football, the culture in this room was utterly foreign to me.

On a mission to collect the personal narratives of Vietnamese refugees for a sociology class that quarter, I had called the South-East Asia Center on Argyle, the â€œLittle Vietnamâ€ of Chicago, to set up some interviews.Â  The director of the center had told me that most of the Vietnamese refugees were senior citizens, and Iâ€™d need a translator to bridge the language barrier between us.Â  He instructed me to talk to a man named Chris about creating a small panel of refugees to interview, with Chris as the translator. When I meandered into the SEAC on the day of the interview, I felt as if Iâ€™d been catapulted into the heart of Vietnam.

I found Chris in a tie and crisp, button-down suit, pierced with a shiny name badge and a pin that read, â€œAsk me questions!â€ Chris was Vietnamese, about 40 years old, and spoke nearly fluid, unbroken English.

After chatting for several minutes about the logistics of the dayâ€™s interviews, he paused mid sentence and uttered, â€œYou know, I am a refugee.â€

Thrown by his statement, I gazed at his meticulous suit and shiny badge. Amidst the crowd of elderly Vietnamese seniors, outfitted in cultural garb and uttering not a word of English, Chris â€“ about twenty years younger than the SEACers â€“ seemed to me to be simplyâ€¦ American.Â  My moment of ignorance posited a question to me: what does it mean to be â€œAmerican?â€Â  And why did I subconsciously group Chris in the â€œAmericanâ€ zone?

The next few hours melted away as Chris spun his story for me.Â  In 1985, at the age of 17, Chris, along with his father and brother, left the rest of their family behind and boldly trekked through Cambodia and into Thailand by foot, where they stayed in a refugee camp for two years before they were sponsored by a Lutheran Church to immigrate to the United States.Â  I asked Chris about his opinion of the U.S. before he immigrated.

â€œThere was starvation in Vietnam.Â  Life was harder, because materialistically, you didnâ€™t have enough.Â  In the village I lived in, two of the houses had television and all the kids in the village would all go over and watch.Â  We knew life in America was very good â€“ people had relatives in the United States, and they would send gifts back to Vietnam â€“ nice toys and chocolates, things like that.â€

The United States had engendered a desire for Western culture and consumption indirectly through the spread of Western products and ideas, even through the iron communist wall that encapsulated Vietnam.Â  Chris told me that his expectations of the U.S. had been more than met when he arrived.

â€œI was so happy coming to the U.S.Â  So vividly in my memory, I remember being in the airplane at night going to land at LAX and look out window, and itâ€™s so beautiful â€“ the lights and the buildings.Â  When I was in the car on the way to my uncleâ€™s house, I just thought â€˜oh my god.â€™â€

Chris clearly clung to the ideal of America as the golden country â€“ the â€œbest country to live in,â€ he said, despite years of anti-Western schooling in Vietnam.Â  However, his vision of himself â€“ his identity â€“ did not shine through as clear-cut as his sentiments on America.Â  He restlessly lingered in limbo between being Vietnamese and being American.

â€œI consider myself half and half,â€ he told me sheepishly as he chuckled softly. â€œI donâ€™t know very much about Vietnam, and in America, Iâ€™m in the middle.Â  I donâ€™t know much of anything.Â  I can read and write Vietnamese, but beyond thatâ€¦â€ he trailed off.

As Chris opened up to me, he opened my mind to the ambiguities of ethnicity and identity in a globalized world.Â  I left Argyle several hours later that day with a dual image imprinted in my memory: Chris â€“ or Chau â€“ head to toe in a tidy black suit with a glinting English nametag juxtaposed against the backdrop of the bobbing Vietnamese lanterns and bulletin boards brimming with flyers in his native language.Â  Living an American life in a Vietnamese ethnic enclave, Chris clearly straddled both worlds.