It was rainy and I was irritable. I wanted to leave as soon as possible. I wanted to go home, play video games, hang out with friends. Anything but this. This was sappy. This did not resonate with me. 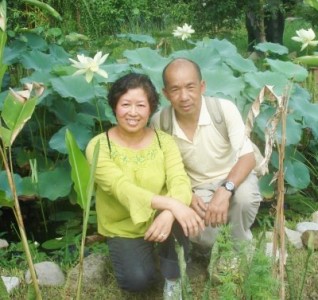 Kim and Hoa, my parents. Taken in Lumbini, Nepal Summer 2008.

My parents came to America while the Vietnam War was simmering down during dÃ©tente. Before arriving in the U.S., my dad stayed in a refugee camp in Malaysia, while my mom, who had not met my dad yet, ended up in Taipei, Taiwan. Neither had immediate goals of settling down, getting married, or starting a family, because they were young and scared. Neither knew where Salt Lake City was on a map, much less that they would end their international journey there and rear two sons with whom they would face daily generational, cultural, and linguistic miscommunication.

We came that rain-soaked day to see a boat. Rain or no rain, my parentsâ€™ eyes were already watery on the drive there. I didnâ€™t know what the fuss was all about.

My mom told me a story about a dead man on her boat from Saigon to Taipei. The American soldiers refused to toss the body overboard. Something about proper documentation and perhaps a Western fear of the ocean as a graveyard. My mom said the boat stank for days when she was at sea.

This boat viewing was held in a shopping centerâ€™s parking lot, next to Nickelcade, an arcade where all games cost five cents, and a plethora of pho noodle shops and halal food markets. This was trashy, I thought. I donâ€™t want to get wet. This did not resonate with me.

Whenever my mom went on her spontaneous vacations to visit relatives in Vietnam or California, my dad would take my brother and me out to eat at La Frontera without telling my mom, who hates Mexican food. She hates the idea of putting beans with cheese and with flour tortillas. My dad loves it. He always rewards himself with a huge enchilada after running a marathon. Over chips and salsa, my dad would tell my brother and me about how we kids have it lucky. Heâ€™d say he would carry 50 pounds of sugarcane from his home to the market everyday so the vendors could make a sugarcane drink called nuoc mia. He said it was miserable. Here I thought sugar was fun and made everyone happy.

This boat was from the wartime. It had transported many Vietnamese refugees to the golden coast of California, where many stayed and built an empire of bakeries and bubble tea houses. My parents, too, were boat people. They were part of an exodus of a proud people from their homeland. A documentary on TV made my mom run up to her room and cry once. They were playing old country songs from Hue, middle Vietnam, where my mom was born.

I thought it was stupid at the time, but as I grow older, I am beginning to understand how much my parents really love me. A part of me knew when I saw them react to this dingy, ramshackle boat in the middle of suburbia. A congregation of fewer than 30 Vietnamese men and women shared stories of escape and grief and family. This boat represented their dreams and visions of America. This boat was their pain of leaving their families and a warm bowl of savory pho behind. Neil Armstrong embarked for the moon. My parents embarked on something greater and more selfless. Theirs too was a new frontier. La Frontera.