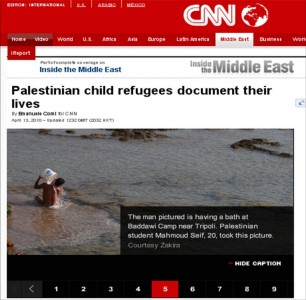 Ahmad Mansour, a 13-year-old Palestinian refugee in Lebanon is viewing life through a different lens in his refugee camp. His is a camera lens.

Through Zakira, a Lebanese charity started by photojournalist Ramzi Haidar, Palestinian children from refugee camps in Lebanon have been given cameras to document the realities of their daily lives. More than 200 children between the ages of 13 and 19 were trained for the project.

According to “Palestinian child refugees document their lives,” the story on cnn.com, several of the children have been trained so well that they have been hired as freelance photographers for local media or for weddings and special occasions.

Palestinian refugees make up about 10 percent of the overall Lebanese population, according to United Nations figures. They live in 12 camps scattered around the country, isolated from the rest of Lebanese society, the CNN story reported.

The story written by Emanuele Comi and posted on March 31, 2010, is a short one without many bells and whistles like video and graphs but it gives us a glance at everyday life in a refugee camp, not through the reporter, but through CNNâ€™s use of Zakiraâ€™s pictures. There are 13 photos taken by 13 different children from various refugee camps.

These Palestinian children are living in poor refugee camps, most of which have rusted, dilapidated structures, yet the children in the photos are jumping on their mattresses and smiling. We do not hear much about their everyday lives on the international news. We hear about the political struggles and violence. It took this project to give us a feel for a child refugeeâ€™s life.

This is a project that could be reproduced for other refugee populations to show the reality of their lives and to put a human face on international issues.