Camp joy: Shoutout to Art for Refugees in Transition 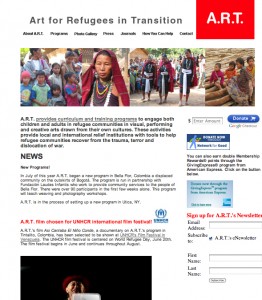 Art for Refugees in Transition, Â or A.R.T, is the charitable brainchild of Sara Green, a graduate of Columbiaâ€™s business school who discovered a void in refugeeÂ camps on a visit to the Balkans.Â  The people living in the camps had left their homes with little hope of returning.Â  Though they were safe and healthy, they lacked any joy or celebration in their daily lives.Â  Green recognized the need for artistic expression as a way for the people, especially the children, to learn how to maintain and celebrate their culture while living in sad and unfamiliar conditions.

The journal section of the website documents Greenâ€™s experience of setting up a program to incorporate the teaching of performance and visual art into schools of Burmese refugees camped in the Mae Hong Son Province of Thailand in 2003. The program has developed and grown and is now led entirely by refugees.Â  They teach and play traditional Burmese music and allow their culture to continue in the spirit of the people as they increasingly lose memories of their homeland and hope in returning.

The second featured journal is that of Lina Maria Sanchez Ayala, the director of the A.R.T. program in Colombia at BogotÃ¡. The Colombian refugee population is internally displaced from violence that is ravaging the country.Â  A cooperative effort between A.R.T., the Universidad de los Andes and the Colombian government set up a program in the refugee camp based on a traditional Colombian arts program.

The most inspiring part of the website is the photo gallery where you can see the programs in action.Â  In Thailand, Burmese women show their traditional dress, children dance, men play instruments, and families live through the trials of displaced life.Â  You see Colombian students dancing in traditional outfits, weaving baskets, eating, and celebrating.Â  Also, take some time to watch the videos.Â  They give you a better idea of the lives and cultures of the affected people. Â Itâ€™s exciting to see the change in expressions on the peoplesâ€™ faces as they find joy in art in an otherwise dreary daily life. Â The programs clearly have been effective in giving the refugees some hope and happiness in their situation.

Though the site has not been updated in a few years, itâ€™s a great example of an organization that finds the spiritual and intellectual needs of refugees vitally important.Â  These often-ignored components have drastically improved the quality of the lives of the refugees who have been aided by A.R.T.