Counting on Clee: Shoutout to Chicago Tribune’s “Voice of his People”

Chicago’s ethnic landscape has long been one of constant shift. The people who make up the city’s vast diversity of neighborhoods can trace their origins to all parts of the world. In recent years, among the refugee groups who have entered the city have been those from Iraq, Bhutan and Burma, often via refugee camps where they resided for years.

In “Voice of his people,” the Chicago Tribune Magazine piece from June 2008, Colleen Mastony tells the story of Poe Clee, a Burmese refugee who has become integral to the growing Burmese community here. As well as his native Karen, Clee speaks fluent English, a skill so rare among the Burmese refugees here that the case worker who met him at the airport the day he arrived in Chicago was so blown away she “practically hired him on the spot.” 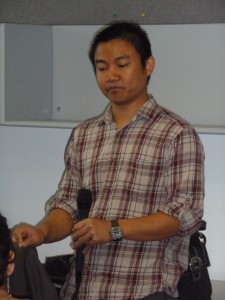 “Now, just 10 months out of a squalid refugee camp, this 5-foot-5-inch, 150-pound man with cocoa-colored skin, thick black hair, a wide smile and a gentle bearing has become the unofficial guide for the city’s newest immigrant community,” Mastony writes.

The article evocatively describes Clee in action. As translator for all of Chicago’s five resettlement agencies, Clee provides crucial, seemingly constant aid to his countrymen, helping them read phone bills, get doctors’ appointments, and fill out job applications. Accompanied by historical background, the article paints a picture of what it’s like for a refugee to navigate the daily challenges of an alien world and how important people like Clee are to helping them do it successfully.

The article also highlights the shortcomings of our country’s immigrant support system. Finding work is difficult, and refugees only have a short time to do it before their monetary support is cut off. But without English, it’s tough to get any sort of job. That’s where Clee can help. Mastony relates an anecdote of how Clee coached a refugee who could only speak a few words of English into a job at a meatpacking plant.

It’s a story about community. Sometimes people need one another to get through life’s challenges. Luckily, Chicago’s Burmese refugees can count on Poe Clee.