Camp songs: Shoutout to NPR’s “The Refugee All Stars” 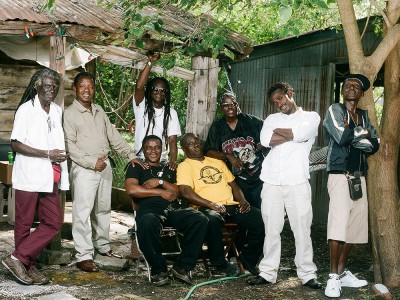 Members of Refugee All Stars. Photo by Zach Smith.

â€œLiving like a refugeeâ€¦is not easy,â€ repeat the members of Sierra Leone’s Refugee All Stars in harmony amidst the captivating beat of steady drums, a shrill harmonica, and bohemian rhythms.Â  The simple chorus in the groupâ€™s first CD drives that home.Â  But this is not a dispiriting disk from a group of musicians who discovered each other in a refugee camp after fleeing from the slaughter and torture of murderous rebels in Sierra Leone.Â  In fact, the group of six refugees manifests an upbeat, radiating beam of optimism and resiliency.

Their experiences during the civil war in Sierra Leone are enough to cripple any glimmer of hope or optimism: several lost both parents and loved ones in the war, rebels chopped off the hand of one of the musicians, and one was forced to murder his own child while rebels stood and watched.

Despite this, the Refugee All Stars found the strength to reach into themselves and sing.Â  The NPR stories illustrate their overwhelming resiliency and success despite being shrouded in darkness and despair.

During the civil war in Sierra Leone, the Refugee All Stars were forced into a refugee camp in neighboring Guinea, where they united as fighting closed in on the capital of Sierra Leone in 1999.Â  Here, they acquired a couple of dilapidated guitars and a rusty sound system, and created a band.Â  In an effort to spread their funky reggae beats, optimism, and fierce resiliency, they performed in other refugee camps in the area.

Their story was the subject of an award-winning documentary film, which helped launch an international career for the band after their debut CD in 2006. Â They recently released their second album, Rise and Shine. The Refugee All Starâ€™s full NPR Archive weaves together interviews with the director of the award-winning film and the groupâ€™s members, a selection of their songs, and a live in-show performance on World CafÃ© to create a synthesized portrait of the Refugee All Stars and their calling.

The mission of the group, as evidenced in the NPR pieces, is not to cultivate personal wealth and fame, but to heal people who have suffered from the trauma of death, destruction, and dehumanization by the perpetrators of war.

“We deal with the war but what we really deal with are the people that are affected by the war and what people do to try and get through that trauma. Â And this power of music, this sort of universal thing that every corner of the world feels. Â Pulling out the humanity is what we really want to do and it all starts with the little steps,â€ Scott Niles, director of the award-winning documentary, told host Scott Simon in an interview.

â€œIt’s really a long struggle out of the war, out of miserable conditions, you know? But it matters really very seriously that we do not really think about ourselves alone. We think about the world, giving our messages into the world, positive messages, and most importantly, peace,â€ echoed Reuben Koroma, lead singer of the band.

A vivacious example of resiliency and success born from the darkest depths of war and loss, Sierra Leoneâ€™s Refugee All Stars inspire optimism and hope by fighting Sierra Leoneâ€™s darkest demons with guitars and drums, rather than guns and daggers.