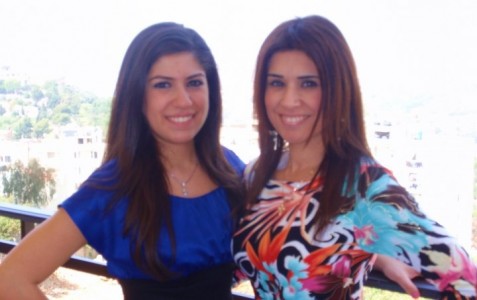 Amanda and her mom in Lebanon

I was in sixth grade at my small Catholic school when we were told about a school-wide special project to focus on cultural diversity. Each grade would choose a country to learn about and share with the rest of the school.Â  I remember most of the grades wanted to pick the â€œcoolâ€ countries – Australia, England, France â€“ the places everyone wanted to visit.

My grade decided to do something different when one of our classmates, Amanda, told us her parents had moved to Illinois during the Civil War in Lebanon.Â  Someone suggested the classy slogan, â€œRock on, Lebanonâ€ and we were sold on adopting this exotic country as our identity for the year.

We had Amandaâ€™s mom come in to give us a cultural crash course on everything we needed to know about Lebanon.Â  I didnâ€™t even know the basics of the place.Â  I assumed it was in Europe, like everywhere else I knew of, but waited for confirmation to be sure.Â  When our new cultural advisor came to say it was by Syria, another place I didnâ€™t know, and Turkey and Africa, places I knew were really far away, I was surprised.Â  I somehow had not realized that my friendâ€™s background was so different from my background and those of most of my classmates.

I remember being so afraid for the next part of our lesson.Â  I was never very adventurous with food and I knew this cuisine was going to be something new. Â Amandaâ€™s mom had made us tabbouleh, a pungent salad of tomatoes, parsley, and onions.Â  I followed the instructions of scooping it up with pita and took my first bite.Â  I was surprised at how much I liked it, and was excited to hear more about Lebanon after that first successful taste of the culture.

The tabbouleh worked to hook our attention as Amandaâ€™s mom prepared to share stories with us about growing up in Lebanon.Â  I expected cute anecdotes and maybe a little history; instead, she started with the story of how she had gotten shrapnel in her leg while simply walking outside when she was younger. Â Lebanon was undeniably war-torn, and growing up there was a stark contrast to my safe, Illinois home.Â  Any people I heard of being injured in war were soldiers, grown men taking bullets to defend their country.Â  Not a young woman doing something I safely do everyday.

I had trouble understanding this different situation â€“ in my young mind, I didnâ€™t know how to contrast the pain and danger with the beautiful pictures and great food.Â  How could somewhere with such interesting culture be so horribly dangerous?Â  I went from intrigued about Lebanon to scared about Lebanon.

Then Amandaâ€™s mom explained that she had come from these tragic times to remain deeply devoted to Lebanon. Her family, the beach, the mountains, the culture â€“ her life seemed to still be in this place that had hurt her so badly.

I remember this day as my first connection to a situation that was entirely different from anything I had ever encountered before. Â I learned to respect the differences of where people are coming from and appreciate the connections we share, which was an important thing to learn when confronted daily by people from different backgrounds and cultures.