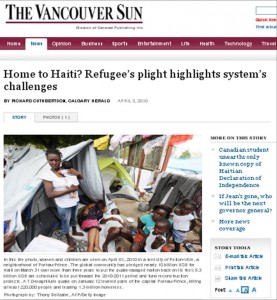 Canada is a sanctuary for refugees, with moderate immigration laws similar to those in the U.S.Â  It also has the highest per-capita immigration rate in the world. But the land of the maple tree is facing problems lately with its policies toward migrants, as Richard Cuthbertson points out in his stirring article for Canwest News Service, titled â€œHome to Haiti? Refugeeâ€™s plight highlights systemâ€™s challenges.â€

The story focuses on Marie, 44, a Haitian refugee who fled her home country in 1999. Now living in Calgary, Marie recalls the trauma she endured throughout her lifeâ€”from her brutal gang-raping to the politically charged murder of her brother. When the Immigration and Refugee Board rejected her refugee claim just before the earthquake struck Haiti in January, she was shocked. That ruling would have meant deportation to the place where two of her siblings were murdered. Worse, she may have had to bring along her 15-year-old daughter. In response to the recent earthquake, officials put Marieâ€™s fate on hold, but she may still be deported if her pending appeal fails.

As Marieâ€™s lawyer Bjorn Harsanyi points out, there is something â€œfundamentally wrongâ€ with returning her to Haiti, the â€œrape capital of the western hemisphere.â€ But fundamentally wrong is not the Immigration and Refugee Board standard. Rejecting refugee claims and deporting immigrants is never a pretty process, something that Cuthbertson doesnâ€™t quite admit. Itâ€™s easy to complain that the process takes too long (in Canada, it takes an average of 19 months just for a refugee claimant to get a hearing), but shortening the time span wonâ€™t save cases like Marieâ€™s from being rejected.

What can be done, short of redefining what circumstances merit refugee status? And how many cases just like Marieâ€™s exist in the U.S.?

Law and ethics collide on this issue. Cuthbertson raises more challenging questions, and his article is well worth a read.