After the hype: Shoutout to Salon.com’s Lost in America 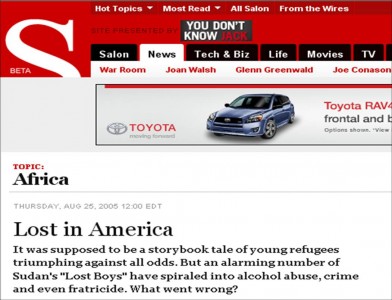 We have seen it happen time and time again, breaking stories of refugees that incite shock, and an outpouring of support for those displaced by the atrocities of war, famine, and genocide. But what happens when the hype dies down?Â  Of course we all rejoice in the successes of refugees brought to America and given a new lease on life, but the sensationalized depictions that disregard the continued challenges and struggles facing refugee populations in a new modern land do little to address the true plight faced by refugees.

Writer Leigh Flayton took a look at thisÂ  issue in a story featured on Salon.com titled Lost in America. Readers were presented with numerous examples of Lost Boys who fled their native Sudanese villages and survived a perilous migration across Africaâ€”young, alone and primarily on foot.

While the article highlights the successes of some of these young men, it also reveals the holes in the system that can allow refugees to slip through the cracks. One of the most poignant narratives involves two brothers who make it to America. Jany, 16, was placed with a foster family and surrounded by the support structures he needed to move forward from his troubled past. His brother Simon at age 23 is too old for foster care and instead was placed with two older boys in a rundown, cramped apartment. Never able to find the solace he so desperately yearns for, Simon was killed by local police after he opened fire in a Catholic Social Services office building in North Phoenix.

Each story depicted in Lost in America shines a necessary light on the continued needs of these and other refugee populations in the United States, and the importance of community-based organizations that provide them with the support they need.Â  When the initial media hype dies down, people often still remain tormented by the horrors of their home situations. The good news is that there are organizations out there dedicated to preventing the caustic, yet common struggles of the disenfranchised. Flayton cites one particular organization, Arizona Lost Boys Center, a local non-profit that aims to give Lost Boy refugees in their community the support they need to grow, prosper and succeed long after the spotlight has moved on.