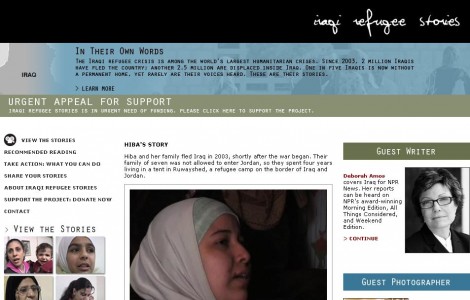 There are 14 stories presented in video journalist Jennifer Utzâ€™s project â€œIraqi Refugee Stories.” Each story is an unvarnished video, each a first-person narrative telling the story of an Iraqi refugee waiting in Lebanon, Syria and Jordan.

The project launched in 2008 and in a few stories, speaks powerfully to the loss suffered by refugees. Utz was reporting in Iraq two years prior to the project and her videos are edited with simplicity, with few effects. The people’s faces and their experiences carry the stories.

Some videos focus on individuals and a single event that affected their lives; others focus on families and the general toll caused by fleeing their country. The stories often cover some type of loss â€“ especially the loss of oneâ€™s families and family members.

Perhaps what is most striking about these video vignettes is the way these individuals tell their stories. Many of these are translated into English via subtitles, yet the emotions of each video sear through. Several individuals speak frankly, such as Noor simply retelling an event. Others, like Hind, are more emotional.

My personal favorite is Hibaâ€™s story. Often alternating between smiles and tears, Hiba describes her worries as a refugee. She emphasizes her loss by describing the little things she is missing out on. She has lost four years; in those years, she could have completed her education, lived like a normal person, she says.

â€œThere is no communicate with the war, like Internet, and learn the computer. There is no gym to lose my weight,â€ she says.

Her dialogue reveals that even the little things matter, and while â€œIraqi Refugee Storiesâ€ has been dormant for a while, Utzâ€™s videos serve as a reminder of what refugees struggle through.