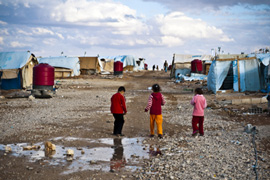 â€œAll the refugees think that they have a right to decide where they are going.â€

But don’t they? This is just one of the questions and challenges in humanitarian efforts that arise in Edith Champagne’s moving documentary Leaving al-Tanf for Al Jazeera’s series Witness.

Al-Tanf was created in the no-man’s land between Iraq and Syria, when a group of ethnic Palestinians fled persecution in Iraq only to find that no country in the region would accept them. Forced to remain on the border between a harsh past and the country that refused them a future, UNHCR stepped in to build a refugee camp for the Palestinians. The camp was designed as a temporary settlement, thought to be needed only for several months. It was not until almost five years later that groups of the refugees were resettled, first in Chile in 2008.

The camp is now closing, bringing a mix of emotions for the refugees. Many are fearful of what they might find in their destinations. Some, considered the luckiest, are going to Western countries to be resettled, but face the uncertainty of a new environment. Others are moving to other â€œbetterâ€ camps in the region, but they are faced with a growing concern that they will never be able to escape camp life. All are forced to separate from family and friends with little promise of reunification.

The documentary tells the story of life in the camp, as well as two interconnected families. Abdulrahman, whose father was killed in Iraq, has found a father figure in Ali, his teacher. Ali formed the Al-Tanf Media Group, which played an important role in advocating for resettlement for the camp residents. Ali is now being resettled in Italy, while Abdulrahman is being relocated to Hassake camp with his mother and sisters. Ali and Abdulrahman share a tearful goodbye, an embodiment of the mix of fear, sadness, and hope that refugees are experiencing as they prepare to leave.

By incorporating images such as these and several different voices and perspectives from within the camp, Leaving al-Tanf brings to the surface one of the most important questions facing refugees â€“ where should they go? And just as crucially, who gets to decide?