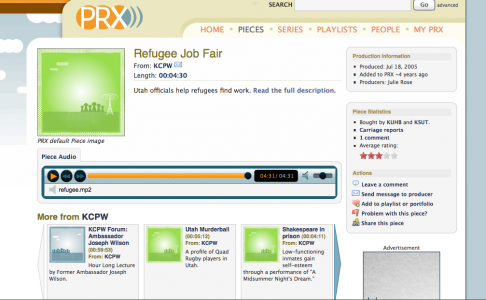 To many, itâ€™s obvious that refugees typically face problems finding jobs when they come to the United States. Learning a new language and culture is tough enough without having to navigate the job sphere. What makes matters worse is the reality that many refugees come from high-ranking careers in their home countries and end up in menial jobs here in the U.S.

So far I had only heard coverage of the problem, never really thinking of what a solution could be. This audio piece, simply titled Refugee Job Fair by Julia Rose originally aired in 2005 on KCPW and is now available on PRX.org. In this piece, Rose highlights one specific example of what many cities with high refugee populations can offer refugees.

In a city in Utah, they have a job fair specifically for refugees, looking for work. That’s where the problem surfaces. The jobs are not necessarily up to the level that some job seekers are qualified for. One employer in the piece says that the language barrier isnâ€™t the only problem for refugees, but coming into a country where employers have the choice of who to hire is a vast difference from some refugeesâ€™ home countries. This means that they need not only have a handle on U.S. culture and the language, but must also impress employers.

Rose added a personal touch to the story, by including audio clips from refugees at the event. Rose included both ends of the spectrum, one woman who has a handle on the language and comes from a prestigious job, another who struggles with communicating what she wants on her application.

So is Chicago arranging anything like this?Â  It seems as though a city so rich in diverse refugee populations, with a vital organization, Upwardly Global, that brings highly qualified immigrants and highly progressive employers together, should perhaps take a page from this.

This is admittedly a four-year-old audio piece, which leads me to wonder if the refugee job fair still continues. I also found myself wondering what the outcome of such a job fair is over time, which leaves me interested to see an elaboration on how many refugees actually find jobs that are actually on their qualifying level.

Perhaps if stories such as these were more highlighted, more programs like the refugee job fair, or perhaps something even more progressive will come to fruition all around the country.