How, when and where are refugee camps started? 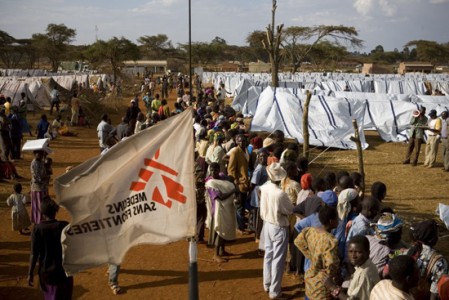 The Doctors Without Borders (MSF) displaced persons' camp in Endebess.

Angelo Rusconi arrived in Endebess, Kenya, in January 2008, just before a wave of post-election violence forced mountaintop villagers out of their homes, scattering them down into the valley below. Less than 48 hours later, Rusconi, a Doctors Without Borders volunteer, was tossing tarp after plastic tarp over wires stretched between the sparse trees of the arid Rift Valley region, creating makeshift homes for hundreds of displaced Kenyans.

Rusconi and thousands of other workers at NGOs, UN agencies and humanitarian aid institutions are the hands and feet of the refugee camp establishment. Through these agencies, refugees and internally displaced persons (IDPs) can find shelter, care and protection until their homes become safe living spaces again.

Over the last century, one organization in particular has risen to prominence in the temporary settlement of refugees: the Office of the United Nations High Commissioner for Refugees (commonly known as UNHCR). Today, the UNHCR has a presence of 6,600 volunteers strong in over 110 countries. But how, exactly, does this process of refugee settlement begin?

It all starts when the UNHCR officially recognizes the need to establish a refugee camp. This generally happens when large masses of people are suddenly, for any reason, forced to flee from or abandon their homes. Whether it be a natural disaster or the unexpected outbreak of war, UNHCR can mobilize teams of 300 or more trained personnel at the site within 72 hours, according to the official UNHCR website.

How does the UNHCR manage to respond this swiftly? First, UNHCR calls on its Emergency Response Teams, which are squads assembled all over the globe with a wide range of relevant skills. These emergency responders stand ready for deployment anywhere in the world at a momentâ€™s notice.

Sites for refugee camps are then chosen according to what places the UNHCR deems both safe and practical. Thus, most camp sites are on the edges of towns or cities in secure areas, far removed from national borders, war zones and mine fields. Usually camps are established on sloping ground so that water can drain out naturally, preventing both floods and health hazards associated with proximity to standing water.

UNHCR then taps into its global network of freight-forwarding and logistics companies, suppliers and specialist agencies to move aid materials from its giant warehouses in Copenhagen and Dubai to wherever these resources are needed the most. UNHCR also has its own mechanisms for instantly securing financial resources so that these refugeesâ€™ or IDPsâ€™ needs can be met immediately. When the necessary manpower and materials have been delivered, personnel start in on first taking care of the physical needs of the refugees. This means setting up tents for shelter, providing emergency medical assistance, and seeing to the food and water needs of the refugees or IDPs.

At this point, the establishment of a safe haven for refugees is essentially in the hands of volunteers like Angelo Rusconi â€“ highly trained specialists responsible for the simple, sometimes insurmountable task of putting a roof over a childâ€™s head.

Watch footage of Angelo Rusconi in Kenya on a Doctors Without Borders (MSF) video report. (YouTube)