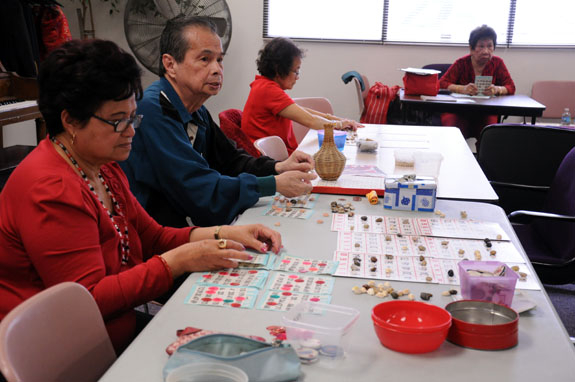 Willi Buhay is an artist, a writer and a leader in Chicago’s Filipino community. He is also a son, and he prioritizes caring for his bedridden mother above all else. Every day for several hours, Buhay visits her at the rehabilitation center where she stays. He brings her food he makes himself and helps spoon-feed her. It’s not a sacrifice, he says, but an act of love.

But not all elderly Filipino-Americans are so lucky.

“It’s beginning to become a trend for some Filipinos to just dump their parents in a nursing home,” Buhay says.

Traditionally, Filipino parents count on their children to care for them in their old age. But for Filipino elderly in the United States, where that’s less of the norm, what will become of them when they can no longer completely care for themselves has become a major concern.

Filipino senior citizens worry about who will take care of them in their old age as younger generations become more westernized and less involved in their parentsâ€™ or grandparentsâ€™ lives, according to Dr. Rufino Crisostomo, a doctor who works for the Chicago Department of Health and is actively involved with the Filipino American Council of Chicago (FACC) at the Jose Rizal Heritage Center.

“In the Philippines, we have a reverence for our elderly,” Crisostomo says. “The younger generation loses that part of the culture after living in the United States. Here there are nursing homes and that’s the culture they learn.”

“In our country, the children take care of the elders,” says Larracas, 72. “It’s not a custom for the elders to go to a nursing home.”

Filipinos are the second largest immigrant group in the United States, after Mexicans. There are 1.7 million Filipinos immigrants here, as well as 1.4 native-born U.S. citizens who claim Filipino ancestry, according to theÂ Migration Information Source.

For Buhay, 61, reverence is a major part of his relationship with his mother, Delia de la Rosa. The two moved to the United States in 1986 after Buhay’s father died. His aging grandmother was already here and de la Rosa wanted to be closer to her to take care of her.

After Buhay’s grandmother’s died, de la Rosa lived briefly in Texas and Kentucky with each of his two brothers before coming to Chicago to be with Buhay. In 2005, the two were planning to return to the Philippines. They felt they had lived long enough in the U.S., and they still had connections and responsibilities back home. But then de la Rosa fell and broke her cervical spine, making her physically unable to withstand a journey halfway across the world.

Before the accident, de la Rosa was an independent woman, Buhay says, having worked as a professor in the Philippines for almost 40 years and lived by herself for 25 years after her husband’s death. But after the accident, her condition meant she needed to be somewhere where there would be caretakers available 24/7. That’s when Lincoln Park Alden Rehabilitation and Health Care Center became de la Rosa’s residence. Her pension covers the cost.

“My friends were trying to make me feel guilty about it,” Buhay says. “But [the Alden staff] knows better than I do.”

Buhay says seniors are wary of nursing homes because they are seen as lonely places that go against Filipino tradition. He worries about his mom when he doesn’t see her for two or three days but calls when he can’t make it to Alden. He often cooks her Filipino favorites such as adobo and other stews and soups.

“It goes by generation,” Buhay says. “My mom took care of my mother, now I’m taking care of mom. I suppose that’s the culture of the Filipinos.”

James Villar, 40, agrees that it is tradition for the younger Filipino generation to assist in caring for their elderly parents and grandparents but says his generation and younger generations are finding it difficult to financially support the elderly in the midst of busy, on-the-go lives.

“Families have to really pitch in, and itâ€™s hard, monetarily and even time-wise,” says Villar, executive director of the Philippine American Chamber of Commerce of Greater Chicago (PACCGC). “Thereâ€™s so many pressures going on, trying to survive this economy. Itâ€™s definitely an obligation.”

The irony of nursing home care

The stereotype of Filipinos employed in the health care industry and nursing homes holds some irony in the context of the culture’s tradition, as younger Filipinos become part of the same place seniors seek so desperately to avoid. The image is more than just a stereotype, with 15.5 percent of Filipino-born men working in health professions compared to 0.6 percent of foreign-born male workers overall, and 22.9 percent of foreign-born Filipino women working as registered nurses compared to 9.5 percent overall, according to theÂ Migration Information Source.

But the image of nursing homes is changing, Villar says. Marketing and advertising has turned nursing homes from lonely and desolate places to something that might promote an active lifestyle or an elderly community. Villar, who considers himself part of Generation X since he has spent nearly his whole life in the U.S., says that despite the changing Filipino culture, he would take care of his parents when the time came. His children said they would too.

The option to return home

In order to avoid living out their last years in a nursing home, it’s not uncommon for elderly Filipinos to return to the Philippines, where they might have family who can take care of them. Lolita Ancheta, 78, who lives in Chicago with her husband and one of their four children, says some of her friends have gone back to the Philippines. They have relatives there, she said, and their children here are too busy with their work to take care of them.

Ancheta views her own situation as a comparatively good one. She enjoys living in Chicago, she says, where she has family to help take care of her.

“Some of my friends are staying in nursing homes because they are very sick and they don’t have family,” Ancheta says.

Going back, however, is not always easy. Health care is less expensive in the U.S. than in the Philippines, Larracas says.

“Here the poor can have some aid from the government, but there really isn’t public aid in the Philippines,” she says. “Maybe we’ll go back, but the Medicare won’t go with us.”

Larracas says that one couple she knows went back, but then the husband got sick. He needed dialysis, but they couldn’t afford it so they came back to the United States. Larracas herself has a husband who is on dialysis, for which they rely on Medicare.

All of Nympha Sherico’s seven children live in the Philippines. Though she has considered rejoining her family, she says, it probably won’t happen because of the cost.

“I’ve thought about going back, of course,” says Sherico, 76. “But I have no means for arranging the expenses to go back.”

Buhay won’t return to the Philippines anytime soon either.

“She depends on me,” he says, referring to how he feels watching his mother’s health deteriorate over the past few years. “I’ve learned how to accept it.”