What does it take to sponsor a refugee? 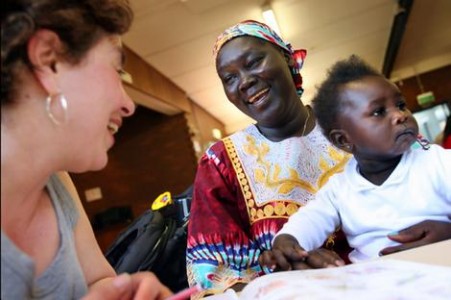 After 14 months, you have finally left the refugee camp for the first time.Â  After a debilitating and long wait for UN approval to immigrate to the United States, you and your spouse board a rickety airplane. Â After a twelve-hour ride, you emerge from within, bleary-eyed and groggy, like a newborn emerging from his motherâ€™s womb into a world of confusion and chaos.Â  Rapid chatter fills the airport, strange characters proliferate waxy billboards, and bizarre smells waft from the shiny delicacies on display behind plastic see-through barriers.

Barriers.Â  They surround you: language barriers, cultural barriers, and security barriers.Â  Overwhelmed and befuddled, youâ€™re drowning in the sea of novelties of this so-called â€œnew homeland.â€

This is where the sponsor steps in.

With open arms â€“ financially and physically â€“ sponsors help ease refugeesâ€™ transition into their â€œthird countries,â€ or the country of their new resettlement. A sponsor will set up an apartment for the family, greet them at the airport, help them learn English, familiarize them with the city, introduce them to Big Macs, and, perhaps most significantly, just be there.

Refugees are then referred to non-governmental organization partners or governmental agencies to help integrate them into their new locations.Â  Sponsors are responsible for refugeesâ€™ first 180 days in the United States.Â  After an arrival is confirmed, a sponsor locates an apartment and pays the rent for anywhere between one month to three months, depending on the agency.Â  Minimal furnishings are supplied, and most items are donated by NGOs or church organizations, depending on the source of the sponsor.Â  The next few days are a chaotic frenzy of helping newcomers obtain social security cards, health services, school registration, and other necessities.

â€œThey [the refugees] donâ€™t have to pay any money out of their own pocket. Every sponsor gets an initial placement grant of at least $1,800. Â Of that, at least $900 has to be spent directly on the refugee.Â  This money is provided for basic needs and safety, like buying arrival food and paying for the first month of rent,â€ says Mary Flynn, director of Lutheran Social Services Refugee and Immigrant Services in Milwaukee, Wisconsin. â€œThereâ€™s a supply list thatâ€™s required because there are certain things that we have to supply the person upon arrival.Â  Most of the things on the list are not supplied by the grant, so we rely on donations from the church.â€

Not only do church members reach out to refugees by providing them with the supplies to survive, they also provide them with their full economic and emotional support by directly sponsoring â€“ or co-sponsoring â€“ a refugee.Â  While these interactions may be temporary, some span lifetimes.

â€œThe sponsorâ€™s relationship with a refugee can be for an unlimited amount of time, or sometimes people maintain relationships for several years,â€ says Flynn.Â  â€œWhile we appreciate people developing long term relationships, we want people to help them get on their own feet and become self sufficient.Â  We donâ€™t want them to become dependent.â€

Therefore, the most important task of a sponsor is to help refugees become economically stable.Â  Thus, a job search ensues, and refugees are referred to other programs associated with the sponsorâ€™s organization.Â  For example, Chicago-based Heartland Alliance boasts not only a sponsorship program, but employment services, English language programs, and vocational training programs as well.

Although the programs are targeted at improving the lives of refugees in the United States, the benefits of sponsorship flow both ways.

“People think it’s going to be the refugee who’s transformed into becoming a new American. But I tell people to fasten their seat belts, because they’ll be surprised who really becomes transformed,â€ Greg Wangerin, executive director of Chicago-based Interfaith Refugee and Immigration Ministries (IRIM) said in a Chicago Tribune interview.

â€œWe’ll find a new country we had only read about but didn’t know anything about. We find the world is much smaller than we thoughtâ€¦ It opens our eyes, it opens our doors, it opens our hearts.”