How is it decided if it is safe for refugees to return to the country from where they fled? Are they compelled to return? 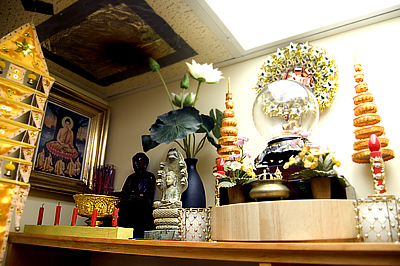 A home away from home. Photo by Jessica K. Chou

In 1980 Ty Tim fled Cambodia with his wife and two daughters. It was their only chance – a window of opportunity after the Vietnamese invaded their homeland.

Tim’s family went through several refugee camps and eventually settled in the United States, ending up in the Chicago area. The Tim family only returns to Cambodia for visits. Chicago is their home now.

However, the United Nations High Commissioner for Refugees (UNHCR) and United States policies on refugees are to push voluntary repatriation. “In seeking durable long-term solutions for most refugees, the United States gives priority to the safe, voluntary return of refugees to their homelands,” states the U.S. Department of State web site. Nonetheless refugees such as Ty Tim may choose to apply for permanent residency or citizenship after a certain amount of time has passed, though the government prefers that they voluntarily return to their country of origin. 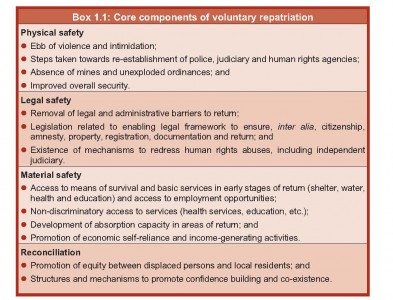 According to the UNHCR’s 2004 Handbook for Repatriation and Reintegration Activities, voluntary repatriation awaits physical, legal and material safety, as well as reconciliation (see box 1.1, courtesy of UNHCR). A country is deemed safe generally by the State Department or the UNHCR, organizations that decide when the threat which drove refugees out is overcome.

Yet the key word is still “voluntary.”

“Once the refugees are here, they are free and, if you will, liberated individuals, you know,” said Dr. Edwin B. Silverman, Chief of the Illinois Bureau of Refugee & Immigrant Services. “It would be an individual refugeeâ€™s decision whether or not to return.”

While the UNHCR promotes repatriation, “UNHCR should be convinced that the positive pull-factors in the country of origin are an overriding element in the refugees’ decision to return rather than possible push-factors in the host country or negative pull-factors, such as threats to property, in the home country,” the agency states. Refugees should not feel forced to return; rather, the benefits and safety of return should be enough.

UNHCR and the home government’s role in all this is to make repatriation possible, safe and positive, an option for refugees who may want to return home from displacement camps or after resettlement.

“Their first priority would be to facilitate repatriation where it is feasible,” Silverman said, and since only one percent of the world’s refugees are resettled in a given year, the UNHCR often works with home governments to let repatriation happen.

Tim, on the other hand, has brought home to Chicago where he fills his house with figurines, books and other artifacts. It is his own Cambodia where he intertwines his culture with photographs of his American children.

As for the option of permanently returning to Cambodia? For Tim, it is still open.