What criteria determine which refugees are admitted to the United States? 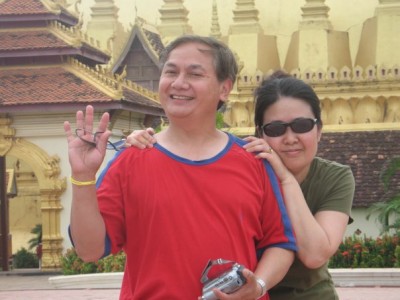 Their love story began in Nakorn Phanom, Thailand, in 1984.Â  Though Songsack met Inthavyvanh in the most strenuous of circumstances, they fell in love.Â  The two Laotian refugees married in Ban Napho refugee camp, but their lives were far from settled.

Songsack and Inthavyvanh applied to go to the United States.Â  They had long wanted to start their new lives there.

In the meantime, life was hard. They dealt with corruption, bribery, and small rations of rice and dried fish for meals.

Nestled among the difficulties were moments of normality.Â  Songsack sold water with his friends to the local village. They played soccer and volleyball.Â  He and his wife took English lessons at a local school where they studied maps of the U.S.

â€œWe talked and laughed and dreamed about the day when we would finally arrive,â€ Songsack says.

More than 250,000 Laotian refugees in Thailand were resettled to the U.S. between 1975 and 1996, according to the U.S. Department of State. Yet a finite number of refugees are admitted into the United States each year.

In order to be resettled in the U.S., a potential refugee must meet three criteria.Â  First, they need to fit the definition of a refugee as determined by the 1951 Convention of the United Nations High Commissioner for Refugees (UNHCR).

According to the convention, a refugee is a person who â€œhas a well-founded fear of persecution because of his or her race, religion, nationality, membership of a particular social group, or political opinion.â€

These ceilings are established based on areas â€œâ€¦of special humanitarian concern to the United States,â€ according to Section 207(a)(3) of the Immigration and Nationality Act.Â  Though it is unspecified whether these concerns are economic, political, or social, priorities for 2010 included the Burmese, Bhutanese, and Iraqis.

While Iraqi refugees have been displaced over the past eight years of war, both Burmese and Bhutanese refugees have been living in camps since the 1980s.Â  The Bhutanese Lhotsampa were expelled from Bhutan in 1988 after the countryâ€™s first census and have since been living in Nepal.Â  The Burmese Karen people were persecuted by their government and forced into concentration camps so they, like many Laotians, fled to Thailand.

Songsack came from a military family that was involved in the anti-communist movement in Laos.Â  Years of persecution under corrupt Laotian communism coupled with the devastation wracked by the Vietnam War led Laotians to be a priority for resettlement.

â€œI expected I would be able to come,â€ Songsack confirms, â€œI think that in a way, [the United States] felt responsible for the refugees that were stranded after the war.â€

The third criterion for admission of refugees is family reunification.Â  Inthavyvanh already had family members resettled in the United States, and she banked on this fact. Â Â She was nearly denied resettlement because she did not look like her brother, but in 1987 the coupleâ€™s dream became a reality.

Like many other refugees today, proving they met the criteria to immigrate was a tedious and anxiety inducing task.Â  Â Songsack Â and Inthavyvanh now enjoy life with their two children in Wisconsin, yet they still look to the past to remember their struggle.

â€œIf it was easy,â€ concludes Songsack, â€œI would not have stayed in the camps for almost four years.â€