What is the process for deciding if a person has a sufficient fear of persecution to be granted refugee status? 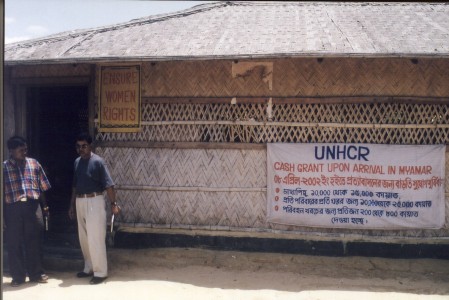 UNHCR office in one of the official refugee camps in Bangladesh. (Source: Peter Ras, Burma Centrum Nederlands, 2003, courtesy of www.burmalibrary.org)

Ahmed Alnidawi worked for the U.S. embassy in Baghdad until conditions became too risky for the Iraqi native to keep living there. After surviving a horrifying kidnapping, Alnidawi fled to Jordan, where his wife had been waiting away from danger.

Alnidawi had several compelling reasons to seek refugee status. Not only were his circumstances extraordinary, but he also worked for U.S. citizens while in Baghdad. Still, it took several months before Alnidawi could earn refugee status and move to the U.S.

Who decides, and what goes into that decision?

Two entities must settle on who gets to be a refugee internationallyâ€”the United Nations High Commissioner for Refugees and the host government. The legal process differs from country to country.

â€œIn some places, youâ€™re stopped right at the border, and put in a reception center, then you get interviewed and they [the host governments] decide whether you can enter,â€ explains Dale Buscher, protection program director of the Womenâ€™s Refugee Commission. â€œIt works different in different parts of the world. For instance in Rwanda, where you had 800,000 people flee into the Congo over a few daysâ€”they can have mandate status, where everyone is granted refugee status, so they donâ€™t have to be interviewed individually.â€

In Jordan, where Alnidawi first arrived, many refugees never bother to actually acquire that status and instead live in the country illegally. According to a 2009 International Rescue Committee report, nearly a million refugees live in Jordan, Lebanon, and Syria, but only 288,000 are registered. Because Alnidawi intended to be resettled in the U.S., he had good reason to seek official refugee status immediately through the UNHCR office in Amman, the nationâ€™s capital. Iraqi refugees in Jordan are treated by the government as â€œguests,â€ which leaves their official legal status unclear.

Whatâ€™s the decision process like in the U.S.? Refugees who are physically in the country seek political asylum when they are afraid to return to their homeland. (The subtle difference between someone looking for political asylum and refugee status has to do with whether the seeker is in a resettlement country like the U.S. or not.) As the 1980 U.S. Refugee Act states, such a person must be â€œunable or unwilling to return because of persecution or a well-founded fear of persecution on account of race, religion, nationality, membership in a particular social group, or political opinion.â€

At the airport or border, the refugee must first declare that he or she is seeking asylum. â€œUnless you say that, youâ€™ll get turned right around,â€ Buscher says. Immigration and Customs Enforcement handles the refugees at this stage. Once in the U.S., the U.S. Citizenship and Immigration Services (USCIS) decides who meets the criteria after the would-be-refugee does some preliminary work, including a Form I-589 Request for Asylum and an interview with a USCIS representative. The interview is detailed, covering the refugeeâ€™s entire case history. The representative asks each refugee what caused the individual fear of persecutionâ€”if the refugeeâ€™s whole neighborhood were bombed, for instance, thatâ€™s not enough to grant him or her asylum. Something must have happened on a more personal level.

The burden is on the refugee to provide evidence supporting his or her claims of individual persecution. If the evidence is not convincing, the applicant can be deported to his or her native country, even if conditions there are still dangerous. Coming up with evidence is a problem for many refugees, who often flee their home countries on short notice, leaving behind important documents, possessions, and records.

Still, the U.S. Supreme Court has issued a few rulings that relax the treatment of refugee claims; for instance, the term â€œwell-founded fear of persecutionâ€ has been interpreted to mean a â€œreasonableâ€ fear of persecution. And if a refugee survives the application process and gains political asylum in the U.S., he or she can file for permanent residency after one year.