How is family defined for refugees and immigrants? 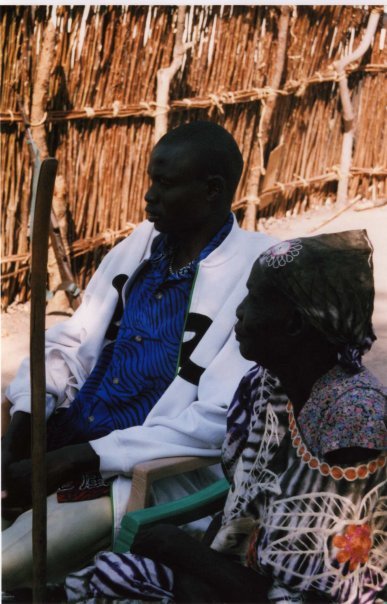 Bul reunites with his mom after being separated for 15 years. Photo taken by Brandi Reissenweber

Motherâ€™s Day just past, filing us all into the greeting card aisle of the neighborhood drug stores trying to find that one greeting card that elicits the warm and fuzzy feelings that accompany memories of momâ€”baking cookies, playing dress up, or even simply kissing us goodnight. A motherâ€™s embrace is a safe place, but in an imperfect world sometimes those embraces and that support, comes from somewhere else.

Peter Magai Bulâ€™s mother loved and cared for him, but at age of six he would be left with only the image of a water truck carrying her back to the village whence they came. After a four-day trek toward the Ethiopia-Sudan border, a swollen leg prevented her from accompanying her son and the thousands of other Lost Boys on the harrowing journey that lie ahead. Bul was alone. He wouldnâ€™t see his mother again for 15 years. Through some of the most trying years of his life he would be forced to rely on his new community of young displaced boys.

The chain of command that Bul, the youngest of five, had known within his village would forever change as the tall six-year-old emerged as a leader and caretaker. Bul eventually assumed the responsibility of more than 300 Sudanese lost boys after walking barefoot over 1,000 miles of Sudan, with nothing but the clothes on their back.

â€œWe lived like we were in a military,â€ said Bul. â€œNobody wanted to order anybody to do something, but we when we had children lying down dying we had to bury them.â€

The whimsy and carefree nature of childhood was replaced by a will to survive. The structures Bul had grown up with and respected hadnâ€™t changed, but were re-distributed amongst the young boys. The oldest boys would oversee the thousands of children, and from there, they would break down the population into groupsÂ  so each boy leader had fewer children to care for. They established a chain of command, delegated tasks and did their best to survive on the limited amount of resources they could scavenge. They became each otherâ€™s only and often last concept of family.

Even at the recent 8th Annual Sudan Freedom Day Celebration held May 22 at Truman College, the Chicago Sudanese community gathered in a sort of solidarity that disrupted traditional concepts of family. Testimony reverberated as community members from Southern Sudan addressed each other in terms of brother, sister, mother and father relative to one’s own age.Â  Relationships had nothing to do with blood lineages, but rather a common history, struggle and above all, cultural identification.

Extending the Meaning of Family

Today across the many cultures represented in the U.S., the nuclear family construct has lost its singular prevalence. Often supportive networks of extended families and friends arise out of necessity creating or supplying an invaluable resource. These extended networks do not often fit cleanly within the antiquated migration laws that tend to recognize only the traditional nuclear family structure.

Carla Arguetaâ€™s family is a perfect example. Her grandfather lives at home, and has for as long as the 22-year-old can remember.Â  As a young child she was expected to help her grandfather navigate the English-speaking world. A native of Guatemala, he only speaks Spanish. Translating at the corner store or the doctorâ€™s office wasnâ€™t a choice, but the role delegated to her by her familyâ€”born out of necessity.

Similarly, her father, Edgardo Argueta took on the responsibility of adopting two of her cousins.

â€œI still think of them as my cousins, but then sometimes it dawns on meâ€”technically theyâ€™re my siblings,â€ said Argueta, now 51.

A legal technicality maybe, but it was an adoption that had to take place to insure that they received the green cards accessible through their adoptive uncle. Those cards would allow them the same opportunities and education enjoyed by his biological daughter who graduated from Northwestern University in March.

Currently, the U.S. government requires that a nuclear family relationship exist between U.S. citizen or permanent resident before a family member can be eligible for green card sponsorship under that person.

The concept of family has never been fixed across time, but in the special case of refugee and immigrant families it begs the question of whether the prevailing extended family networks are indeed a part of a larger cultural phenomenon or a symptom of an outdated legal framework.

According to the United Nations High Commissioner on Refugees (UNHCR), which is mandated to lead and co-ordinate international action to protect refugees and resolve refugee problems worldwide :

â€œFirst, a priority system gives some refugees with relatives in the U.S. preferential access to resettlement if they themselves are found to have a well-founded fear of persecution.

Secondly, a visa program for relatives of refugees is based on derived status and does not require the joining relatives to demonstrate a fear of persecution.

Thirdly, regular family immigration procedures are available to all permanent residents, a status normally available to refugees one year after resettlement in the United States.â€

Yet refugees and their families still face obstacles in reuniting after long periods of estrangement.Â  Rigid documentation requirements can make it hard for refugee or migrant populations to prove a relationship. In many areas women are disproportionately affected by these requirements because of the gender inequality that exists in their countries of origin.

Many of the Lost Boys Bul traveled here with do know their exact date of birth, let alone have the actual documents to prove from whom and whence they came.

Further, same-sex couples are often excluded under current frameworks.Â  It is up to each nation state to recognize them under the UNHCR family unity and refugee protection. Therefore, these marginalized populations often face discrimination rooted in the same intolerance that may have forced them to flee.

A Northwestern student who has chosen to remain anonymous recently shared her personal plight. She has been in a committed relationship with her 20-year-old girlfriend, whom we’re calling Rosalind, for over two years. She knows in her heart that Rosalind is the woman she wants to marry, but Rosalind’sÂ  status in this country complicates their happy ending.

She is documented but illegal. She has a social security number, but has little else to offer in terms of documentation.

â€œThey know Iâ€™m here,” Rosalind said. “I have a work permit and a valid drivers license, but because Iâ€™m not a permanent resident of any sort, I can not leave the country.”

She, instead exists in a state of limbo. She came to the states with her mom when she was only 5 years old, and hasnâ€™t returned to Brazil since. She has very little recollection of the place she is expected to call home.

Her mother recently gained citizenship after getting married in 2007, but when her spouse died shortly after their union both of them were at risk of losing the green card sponsorship available through the marriage. What ensued is a tangled web of conflicting state laws that allowed their case to be considered under California law, but denied in Florida where they live.

By â€œmovingâ€ or at least transferring their address to California they were both interviewed, but only her mother has received a green card.

Rosalind was told she first child being considered under the law in California and her attorney assures her that pending another interview she too should be sent a green card.

â€œNow, I just wait for something to come in the mail.â€

Unfortunately, for Rosalind, her sexual orientation makes it impossible for her to take the route her mother chose. She cannot find a simple solution in marrying the woman she loves because the union would not be recognized by federal or international laws. Instead, she anxiously waits to be sponsored by her mother who expects to get her permanent green card next year.

Refugee protection under international norms set forth by the UNHCR promotes family unity, but discrepancies and fear of fraud amongst countries, including the U.S., often beg the questionÂ  of how legal frameworks take into account extended family networks.

The More Families Change, the More …

Bul and Argueta both operate under the familial frameworks that have evolved around them.Â  There is an old African proverb that stipulates, â€œIt takes a village to raise a child.â€ The nomadic and homogeneous nature of Bulâ€™s adopted village of lost boys may have been exceptional, but it was a village. It was, and still is the family he relies on for comfort, support and understanding. And it is extremely interesting to note that the same constructs that hinder members of his family from joining him are also the constructs that promote more pliable constructs of family within the Sudanese community he associates with here in Chicago.

These are the young men and women he has come to rely on, and he has witnessed first hand what can happen when those supportive networks suddenly vanish.

â€œSome of the Lost Boys now are on the streets. They canâ€™t work, they canâ€™t do anything,â€ said Bul. â€œIt was different because back in the days we were close, if you found yourself being depressed, we would try to find some way to comfort you, but now in America, people are busy.â€

Constructions of family emerge out of our necessity for support. They find their ways into our lives based on our experiences and cultural understandings. Argueta understands her Guatemalan cultural values and fuses them with values embedded within American culture. She and her grandfather learn from each other.

There is no finite construct of familyâ€”it is just as unique as the individuals and experiences it grows out of.Â  Shouldnâ€™t legal protections, then, be extended to differing family constructs?

â€œItâ€™s not about me, or even the people who are close to me,â€ said Bul. â€œItâ€™s about humanity.â€