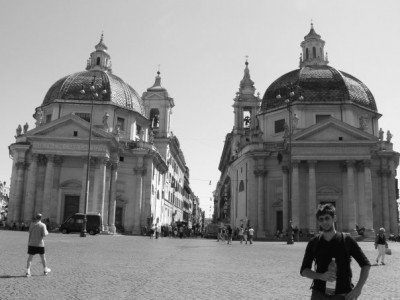 â€˜â€™You think Italian culture in America, you think spaghetti and meatballs,â€ Fricchione says.Â  â€œBut going to Italy totally changed my perspective on the ItalianÂ lifestyle and people in general.â€

Eager to connect with his roots, Fricchione decided to join the 5,000 Italian Americans who apply each year for dual citizenship in the land of their forebears. Together, they are helping to redefine what it means to be an Italian in America.

â€œI am 100 percent Italian. Itâ€™s something I take pride in,â€ heÂ says. â€œMaybe one day Iâ€™d want to go back toÂ ItalyÂ and reclaim my heritage.â€

The citizenship window was thrown open in 1992 when the Italian government dramatically expanded its definition, embracing citizens of other countries who can trace their heritage back through the appropriate channels to relatives who possessed Italian citizenship.

As with any bureaucratic initiative, the application process can be long and arduous, and exceptions seem to outnumber rules two to one, but a whole new world awaits those who possess the right combination of patience, determination, bloodline and luck.

[Click here for simplified instructions on whether you qualify and how you can apply.]

Qualified Italian Americans who brave the red tape involved in gaining dual citizenship apply for a certified Italian passport at the same time.Â  They typically receive the passport from the consulate within four weeks of being registered as a dual citizen.Â As a member country of the European Union, Italy’s passport allows for easier travel between the U.S. and Europe, as well as among European countries.

But the benefits don’t end there.Â  Dual citizens can also enjoy voting rights in Italian elections as well as access to Italian health care and publicly-funded education systems. Additionally, Italy and the rest of the EU provide a whole new market for business and property ownership.

Anthony Turano, 29,Â  has been a dual citizen since he was 16.Â  He realized the advantages of his citizenship when he studied abroad in Rome during college.Â  While the other participants in his study abroad program dealt with the hassles of obtaining visas and travel documents, Turano let his Italian passport do the talking.

â€œIt definitely made a lot of those trips easier,â€ he says.Â  â€œI just had to show up.â€

Though Turano has used his dual citizenship primarily for ease of travel, he says another opportunity lies in globalizing his familyâ€™s Chicago-based business, the Turano Baking Company.

â€œMoving out and looking to the future, it makes buying property and doing business in Europe easier as well,â€ Turano says.

Marco Masi is the co-owner of the Italian Citizenship Assistance Program, or ICAP, which helps applicants gather the documents required to obtain Italian citizenship.Â  He says that business owners like Turano often report that dual citizenship poses many advantages for their enterprises.

â€˜â€™A lot of people find it much easier to buy property and own business in Italy when theyâ€™re citizens,â€™â€™ Masi says. â€˜â€™For example, some of our clients have told us that [Italyâ€™s] requirements for producing a companyâ€™s financial statements like tax returns are much less rigorous for Italian citizens as opposed to non-citizens.â€™â€™

Fricchione says the Italian business scene is an untapped resource because of advantages like these.

â€œItâ€™s a whole other market out there that a lot of people in this country havenâ€™t explored,â€ he says.Â â€œWe donâ€™t usually focus on Italy in the U.S., but itâ€™s still a huge economy.â€

For a young professional like Fricchione,Â international experience can also be a big plus on a resume, and Italian citizenship highlights valuable job opportunities abroad.

â€œCould I find myself working in Italy for a politician? Of course,â€ Fricchione, a senior legislative assistant in the New York State Senate, says.Â  â€œI think that this will open someÂ moreÂ doors for me.â€

Masi agrees. â€˜â€™Often, preference to jobs [in Italy] is given to Italian citizens or European Union citizens,â€™â€™ he says. â€˜â€™When you have a visa, you can only stay in Italy for so long.Â  That’s disruptive for employers.â€™â€™

A work visa allows its holder to remain in Italy a maximum of 365 days.

Not just for the young at heart

However, dual citizenship isnâ€™t just a sport reserved for the young job seekers or American-born like Fricchione and Turano.Â Â After 42 years of passively observing Italian politics, Frank Cosentino, a 70-year-old emigrant from Cosenza, Italy, decidedÂ to seek dual citizenship so that he could playÂ a more active role in Italian elections.

Dual citizens have the option of voting in Italian national elections and in elections for the district from which their relatives came.Â  However, dual citizens may not vote in both U.S. and Italian elections in the same year.Â  They inform the consulate if they choose to vote in Italy, thus giving up their right to vote in the U.S. for that particular year.Â Â For a native Italian like Cosentino, the trade-off is worth having say in Italian politics.

â€œI saw a few candidates for state and mayor [that I liked] and I couldnâ€™t have a say in who won,â€™â€™ CosentinoÂ remarks. â€˜â€™Why not be able to enjoy all of the full benefits [of being an Italian citizen] including being able to vote?â€™â€™

Anthony Turanoâ€™s uncle and owner of theÂ Turano Baking Company, 67-year-old Renato Turano has taken ItalianÂ political participation to a whole other level.Â Five decades after emigrating to the U.S.,Â Renato TuranoÂ ran to represent those from his hometown in Calabria, Italy, at the national level. Since his highly publicized election in 2006, Renato Turano has been an Italian senator, or Senatore, while maintaining residence in the U.S.

Renato Turano says that many dual citizens like Cosentino decide to utilize their voting powers particularlyÂ in years of non-Presidential elections. But Cosentinoâ€™s interests were practical as well political. He wanted to avoid paying to renew his visa each year for trips to Italy.Â  Instead, he chose to pay the one-time citizenship fees which grant him unlimited access to his home country.

Though the consulate does not charge anything for jure sanguinis applications, many individuals pay companies like ICAP to help them find the necessary documents.Â  Fricchione underwent the application process on his own, but says in retrospect that some help would have been worth the cost.

ICAP charges clients to procure the documents required to obtain Italian citizenship.Â  ICAP charges $245 for naturalization forms alone.Â  It charges between $60 and $80 to procure necessary birth and death certificates, in addition to a $65 translation fee.Â  Masi says that total costs generally add up to around $700.

But for frequent travelers like Cosentino, this was the most economically efficient way to travel. 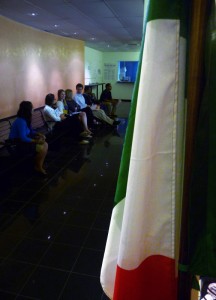 A line forms inside the waiting area of the Italian Consulate of Chicago on Michigan Avenue. Photo taken by Kayla Stoner.

â€œI can still go to Italy whenever I want,â€ heÂ says. â€œWhen you do the citizenship, itâ€™s one time and you pay and itâ€™s done.â€

The benefits of dual citizenship draw scores of Italian Americans to their local consulates, but many are surprised toÂ discover how complicated the requirements are.

â€œItâ€™s ridiculous,â€Â saysÂ Maria DeFilippis who was shocked to discover that even though she was born in Italy she did not qualify forÂ jure sanguinis citizenship â€“ meaning â€œby right of blood.â€

In 1977,Â then 18-year-oldÂ DeFilippis renounced herÂ ItalianÂ citizenshipÂ and became a naturalizedÂ American so that she could qualify for U.S. college scholarships.Â  When she tried to regain her Italian citizenship years later, she realized that her renunciation would make it an arduous process.

â€œThe consulate told me that I would have to live in Italy for six months and then petition the Italian court,â€ DeFilippisÂ saysÂ of what she discovered when trying to apply in 2006. â€œAnd who knows how long that would take.â€

Renato Turano, a Chicago resident and Italian Senatore, has taken it upon himself to learn the ins and outs of the complicated process and volunteers his assistance to people like DeFilippis who are confused by the qualification requirements.

â€œI have phone calls every day from people who want to become citizens and ask â€˜why am I not eligible?â€™â€Â Renato TuranoÂ says.

According to the Italian Consulate of Chicago, the most common problem applicants face relates to renunciation policies, as in the case of DeFilippis.Â  Even for those who qualify, the process is often tedious. Â Fricchione submitted his application more than one year ago and is still only half way through the process.

Stacks of applications for visas and dual citizenship wait to be looked over in the offices of the Italian Consulate of Chicago. Photo taken by Kayla Stoner.

â€œWhen I initially called the consulate to make an appointment, they gave me a date and time scheduled for like a year later,â€Â saysÂ Fricchione, who is still awaiting approval from the Italian ConsulateÂ of Chicago. â€œSo, that was kind of frustrating.â€

Renato Turano says that due to decreased funding and employee cut backs, the consulate is often backlogged with applications like Fricchioneâ€™s.Â  Senatore Turano helps applicants by guiding them to the appropriate organizations to get proper documentation from the right sources. To Renato Turano, the travails of the process are only a small price to pay for the benefits â€“ business and otherwise.

â€œItâ€™s a matter of pride and something we can pass on to our kids,â€ heÂ says.

Indeed, those with dual citizenship may find that the rewards arenâ€™t confined within Italian borders.

â€œI see it more as a freedom issue â€“ it gives me more options in life,â€ FricchioneÂ says. â€œOnce you get exposed to something different, it turns on a light and you see that there is a whole other world out there.â€