For Korean-Americans, culture, too, is lost in translation

Maybe this was his thousandth one. Unceremoniously, Doug Lee snipped the potsticker in half with a pair of scissors. With a sense of bored familiarity, he mechanically plunked the half-pieces on a tray as the throngs of customers passed before him, some occasionally veering from the shopping aisle to try one of his samples.

Lee, an 18-year-old Korean-American whoâ€™s lived in Chicago all his life, had four more hours to go. After three months of working as a potsticker cutter at Super H Mart, a popular Korean supermarket in northwest suburban Niles, this was his last day of work and, for him, possibly the last time he would need to speak Korean.

â€œI always had an accent when I spoke Korean,â€ Lee says, â€œbut some of it went away [by working at H Mart], because a lot of Korean customers donâ€™t know English, so you have to talk to them in Korean. The whole point of my job is to sell the product that Iâ€™m given to sample.â€

Lee says he often becomes frustrated with customers, especially older Koreans with their expectations of fluency and respect for elders.

Kay Park, the business owner of Korea Ginseng Chicago in Niles, summarizes the prevalent generational conflict for Korean-Americans, saying, â€œWe speak to our children only in Korean, and they understand, but they respond in English.â€

Lee dropped potstickers one by one into a pot of boiling oil. Sensing the presence of someone waiting in front of him out of the corner of his eyes, he quickly snatched up a cooling potsticker from his station and split it in two onto the tray without even looking up once at the sampler. He said he prefers it this way: little to no interaction with the older Koreans.

â€œWeâ€™re slowly losing our culture because we donâ€™t really have a good educational system set up to learn our own language, our own background or ethnicity,â€ says Lee. â€œEducation here doesnâ€™t support that. It emphasizes the melting pot idea. Blending in together.â€

Every Saturday, from when he was five years old until his first year in high school, Lee attended Korean language school, at the prodding of his parents, to learn the language and culture. Though Lee admits that he made some of his good friends at the weekly language school, he said that he didnâ€™t learn very much Korean beyond what was very basic. Some of that, Lee says, is due to his indifference toward in his mother tongue.

â€œI was born and raised in America. We have a different culture than how my parents were raised. They believe in blood before anything else. My mom had a big family with 16 kids, so they all grew up together real close,â€ says Lee who has two younger brothers.

Despite his involvement with Korean language schools for nearly ten years, Lee says he still does not have a good handle on the language.

â€œLanguage school is only once a week,â€ he says, â€œso you canâ€™t really teach someone Korean, because theyâ€™re kids. If you only teach them one day out of the week, theyâ€™re just going to forget it, then you have to re-teach them the next week. Youâ€™ll make no progress in the end.â€

There are 134 Korean schools in the Midwest, two-thirds of which are in Illinois, according to the Korea Education Center (KEC).

â€œStudents attending Korean school consists of K-12 and very few adults, â€œsays Grace Choi of the Korea Education Center in Chicago. â€œMost of these students are Korean-Americans, second or third generation Koreans, but also a lesser portion is filled by Korean adoptees and those with mixed backgrounds.â€

One of Leeâ€™s biggest concerns when it comes to his struggles with the Korean language is that he isnâ€™t as close with his parents as he would like to be. â€œJust because of the language barrier and the culture barrier, I had to raise myself, learning traditions over here, while my parents are trying to teach me traditions over in Korea,â€ he says.

Choi says the number of students who are enrolled in each Korean language school has decreased, according to data collected by KEC. On the other hand, the number of registered Korean schools has increased.

For instance, the total number of enrolled students in Korean language schools in the Midwest in 2009 was 5,072 students at 120 schools. In 2010, both numbers increased: enrolled students went to 5,234 and schools went to 134. The ratio of students to school in just the past two years decreased, meaning enrollment of students at individual schools saw a noticeable decline. Overall student population increased at a rate much slower than that of the registered schools, which accounts for the decreased enrollment Choi referred to.

In two months, having graduated high school, Lee is going to boot camp to join the Marine Corps. Though his father canâ€™t speak English and though he hardly ever talks to his father, Lee says that at least his fatherâ€™s 12-year involvement with the military in South Korea somehow rubbed off on him in the United States.

In the seafood section of H Mart, a woman wearing an iridescent cartoon-fish hat extracted slugs from bai top shells, offering the meat samples to passing customers. Sunja Lee, 65, says she is upset by the number of Korean youth who canâ€™t speak Korean fluently. 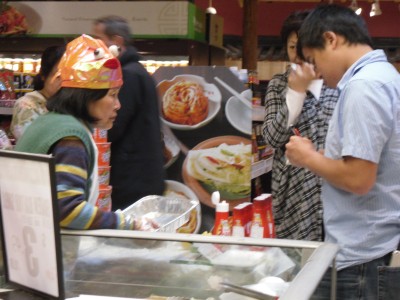 â€œIf [children] live with their grandparents, they learn Korean quickly.â€ Sunja Lee says. â€œParents need to talk to children in Korean or they will not learn. Our children should not speak in English.â€

Though Sunja Lee touts at-home language instruction and immersion as the best way for second generation Koreans to learn their language, she realizes the difficulty for parents to do so in America.

â€œParents work and have no time,â€ she says. â€œIf they are Christian, there are Korean schools with programs at church. Young parents should send their children to these programs. [Many] Korean Christian church has a language school program on Sundays.â€

Sunja Lee, herself, however, is skeptical of a Korean language and cultural education for her own two sons in the United States. After her sons were born, she moved back to South Korea with her children for them to attend primary school, where they became and remained fluent in the language and aware of Korean cultural norms.

â€œKorean parents should teach their children Korean sincerely,â€ she says. â€œOtherwise they have no chance to learn the Korean language. I feel sorry for my older brother. He has three sons and he didnâ€™t teach the Korean language to them. He didnâ€™t even send them to Sunday language school. He didnâ€™t care to teach them, so they donâ€™t speak. Every time he speaks English to his children, it is ugly.â€ 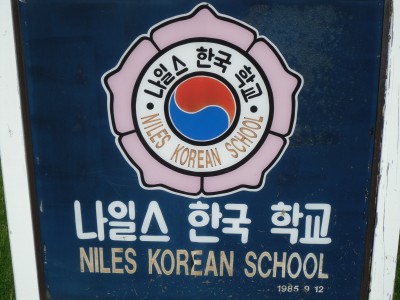 Niles Korean School, housed in the Lakeview Presbyterian Church, is one of the popular language schools in the Chicago area. Photo by Dan Q. Tham

Jongmin Cho, 35, a shopper at H Mart, says, â€œWe may live in America, but we are Koreans. I have noticed that more and more Korean parents are okay with their children speaking only English. There will be problems later on.â€

Some Korean youth, however, have noticed a trend among others their age to return to and embrace Korean culture, which usually translates to popular Korean media, like K-Pop or K-Dramas.

â€œIn my experience, [the trend has] been more towards returning to their culture,â€ says Richard Noh, a sophomore history major at Northwestern University. â€œMany of my friends speak Korean still and are invested in Korean music, dramas, and talk shows.â€

Browsing the H Mart produce with his friends, Chulhan Song, 20, a piano major at Northwestern University, agreed that he too has noticed a trend of youth learning language and culture through media.

â€œMost of my education actually came from my parents rather than Korean school,â€ Song says. â€œOnce a week really isnâ€™t that much. More and more of my friends are learning Korean through popular media, like watching dramas or listening to songs. I think it is important to bridge that gap and I find that younger Koreans find ways to touch back to their culture at least once or twice.â€

Linda Hong, a sophomore biology major at Northwestern University, sees it differently. â€œYounger Koreans definitely are more Americanized in my view. I have two younger sisters, and I see a fading gradient as we go down the line. My youngest sister absolutely refuses to speak Korean, though she understands most of it,â€ she says. â€œSince my parents only spoke in Korean to me when I was young, I had no other choice but to pick up the language. When my younger sister was born, my parents had learned more English, I had learned English at school, so my sister grew up with a combination of English and Korean at home.â€

For Hong, the most pronounced inter-generational issue for Koreans in America is cultural, which undoubtedly stems, she believes, from language issues.

â€œKorean-Americans â€˜failâ€™ to show enough respect to elders in the eyes of the older Korean generations and these same elders are too â€˜old-fashionedâ€™ in the eyes of the younger generations,â€ Hong says. â€œEach doesn’t understand the other because they were brought up in different times and cultures.â€