[A version of this story was published in the India Tribune. Read the story here.]

South Asian artists converged one night in early May at the Ethiopian Diamond II restaurant on the northern edge of the city for an open mic night. The event was sponsored by Subcontinental Drift which hosts open mic events around the country to foster creative expression and artistic involvement in the South Asian community through stand-up comedy, spoken word and Bollywood performances.

To warm up the crowd, one of the performers opened his act by shrieking, “It’s quiet in here! This is like telling-your-mom-you’re-not-going-to-medical-school quiet!”

The audience howled. The joke had hit close to home where young South Asian adults feel their way through informing their parents of their intentions to pursue creative vocations instead of careers driven by math or science.

Some young adults are finding it easier than expected to tell their parents they would rather pursue an arts education. 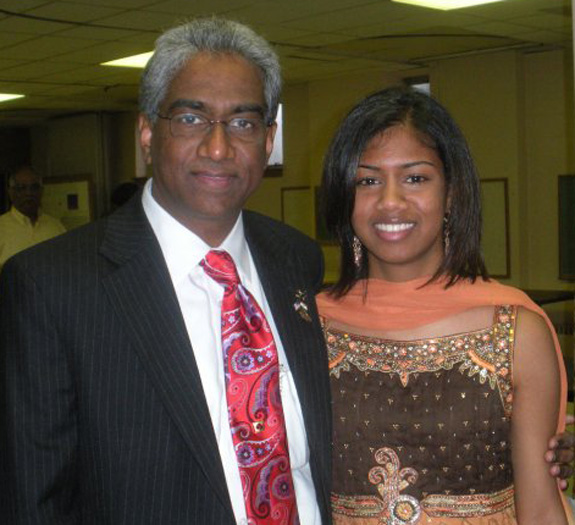 Paturi began working up the nerve to tell her parents she wanted to pursue a career in the arts when she was about 17. She says it was her fatherâ€™s harrowing success story as an immigrant from a poor family who came to the United States with so little and made so much that gave her the courage to speak up.

From her father Dr. Raju Paturi’s perspective, he never pressured his children to choose more traditional careers like being a doctor or a lawyer. He said he sees himself as being different from some other parents in his community whom he called “helicopter parents” because they “make decisions for their children” or exercise too much control in their children’s lives.

While Rachel Paturi says she is blessed to have a family as supportive as she does, she remembers a slightly different story.

“At first [my dad] was extremely hesitant but he’s starting to come around because I’m so passionate about it,â€ she says. â€œHe’s just happy I’m happy.”

Danish AlidinoÂ recalls a different experience. As one of the vocalists for his band Six to Nothing at Open Mic Night, Alidino provided beautiful melodies in Hindi while singing alongside his partner, Ankur Thakkar added the English vocals. 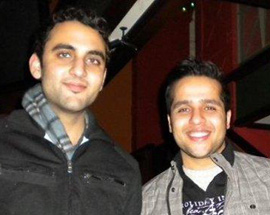 Danish (right) and Thakkar (left) of Six to Nothing

“I’ve always been passionate about music but I never told my parents,â€ AlidinoÂ says. â€œI was hesitant to tell them I sing.” Hesitant to ever tell his mother about his passion, he is graduating with an engineering degree and currently works as an IT Engineer.

“I was never interested in engineering. I just felt I had to do it for [my parents] and job security,“ he says.

In the clip, Six to Nothing performs their version of one of their favorite songs and explain how music is their hobby but not career.

[audio:https://immigrantconnect.medill.northwestern.edu/wp-content/uploads/2010/05/Six_Intro.mp3|titles=AlidinoÂ Singing For “Six to Nothing” at Open Mic]

AlidinoÂ brings up a good point. While communication and fulfillment are laudable, they don’t pay the bills. Were his parents so off-base to push him to a traditionally lucrative career? What parent isn’t worried about their children’s future ability to support themselves?

This is especially relevant given that the Indian-American community is the highest earning immigrant population in the United States with a median household income of $61,322. The children of the diaspora feel especially pressured to do well because their parents have invested so much in making a better life. Young peopleâ€™s parents expect them to surpass their own success.

Aroon Shivdasani, Executive Director of the Indo-American Arts Council Inc. in New York City, says this concern is founded but it can be resolved.

“Everyone needs to make a living and unfortunately the arts donâ€™t give you a living,” she says.

She offers a possibly unpopular solution — parents, start donating to the arts!

â€œParents need to start giving to the arts,” Shivdasani says. “How can you expect your children to earn a living if you are not contributing to their field?”

â€œIn temple and in cultural functions, creative endeavors symbolize culture instead of creativity because it is ritual,â€ KhubchandaniÂ says. â€œBut some people find they can take this [into the mainstream] and perform it in theater.â€ 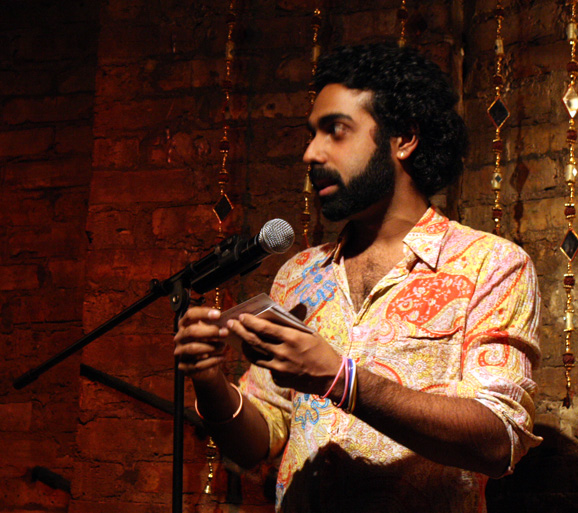 That is exactly what KhubchandaniÂ has done. Having grown up performing traditional Bollywood dances, he now choreographs plays and dance performances as a way of critically understanding South Asians in different contexts.

â€œWhat people may not realize is that sustaining cultural practice is sustaining creativity,â€ he says.
With many creative avenues opening up for South Asians and the stated cultural importance in engaging in cultural endeavors, Khubchandani says, it seems as if youth should have little problem with having their parents become accepting of an artistic vocation.

The perception that South Asian parents won’t accept their children’s study of fine arts is a common fear but Khubchandani says that the perception is a self-perpetuating myth. He thinks youth should have more faith in their parents.

â€œThe biggest problem is that there is a perception that there is a divide. By believing in this so much, you just reinforce it,â€ he says. â€œEven if people think that their parents donâ€™t want them to be a writer or actor, they might be willing.”

Khan has young children who don’t seem to be interested in the arts, he says. He considered enrolling them in traditional dance classes but they prefer to play cricket. Still, should they decide to enter the arts industry as a career, he would support them. “I just want them to find a nice job in any field,” he says.

The Future of South Asians in the Arts

Alidino believes that to change, more South Asian representation is needed in the arts.

“Having a South Asian role model will encourage [youth],â€ he says. â€œThey can see it’s possible.”

KhubchandaniÂ agrees that visibility is key, and pointed to Anish Kapoorâ€™s â€œCloud Gateâ€ sculpture in downtown Chicago, known to locals as the Bean.

â€œSouth Asian tourists look at it and say, ‘Oh thatâ€™s amazing!â€™ but no one can imagine that it was made by another South Asian. The visibility isn’t there.â€

Fortunately for AlidinoÂ and Khubchandani, there are many organizations working to increase South Asian visibility in the fine arts.

â€œThirteen years ago, when we started the Indo-American Arts Council, South Asians were not visible at all,â€ says Shivdasani. â€œIt is because of the efforts of the arts council that they started getting mainstream visibility.”

Since the formation of the Indo-American Arts Council in 1998, several other fine arts organizations arose that incorporate disciplines in theater, dance and film, all with the mission of giving South Asians artists a creative platform in which to thrive.

Whether these artists realize it or not, the upswing in South Asian artistic influence is aided by an unlikely source: their own community.

South Asian families living in America continue to enroll their children in classical Indian dance and music lessons so that their children may be more connected to their roots.

Raja Salao, who manages an Indian and Pakistani grocery store, says that while he doesn’t think many Indians will ever pursue the arts as a career because they provide too unstable an income, he sees the cultural benefits in teaching kids Indian arts as a hobby.

“You always love your culture,” he says. “Arts are a way to do that. You can perform on your country’s days, like India Day or Pakistani Day and stay connected to your culture… but you won’t be able to make money in it.”

Aside from wages, there may be a practical benefit to exposing one’s children to the creative arts at a young age. They’re likely to learn skills like determination and the importance of practice that will aid their future endeavors in whichever career they may choose. In addition to possible career benefits, children can also develop a rewarding passion that contributes to their understanding of themselves and their culture.

Sometimes this passion comes in the form of a lasting commitment to the arts which children may one day want to make their career. Other children may want to keep dance or music in their lives as a hobby and pursue more traditional paths as their careers. Whether or not children decide to become doctors and lawyers, or Bollywood-inspired dancers, remains to be seen.