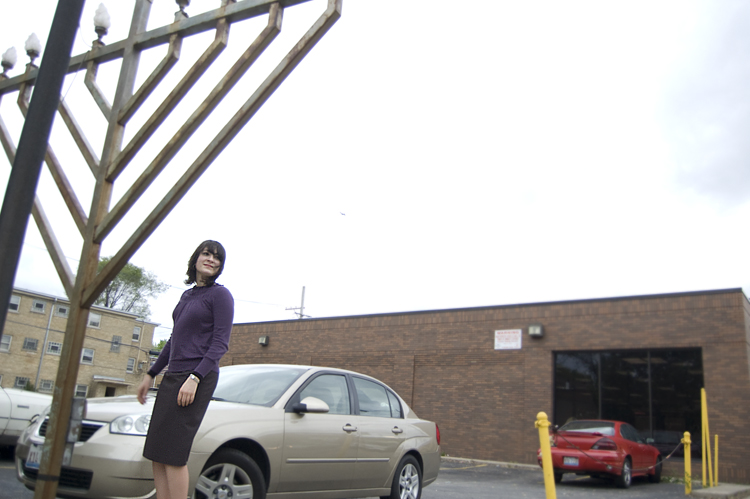 Friday night means many things to Lifsha Tsetlin. It means reflection, removal from the tangible world. It means spending time with her family, with herself, and most importantly, with God. To Tsetlin, Friday night is tradition.

The 21-year-old often recalls staring up one Saturday morning at the boarded-up, burnt and broken synagogue of her 5-year-old self. Seventeen years ago on a Sabbath night, two men had set the Chicago synagogue on fire.

“I remember standing there and it was very confusing,” Tsetlin says of it now. “And sad. I mean, our place was burnt down.”

The fire attack on Friends of Refugees of Eastern Europe (F.R.E.E.) synagogue was the first of many attacks against Chicago synagogues between 1993 and 1994, a response to tensions in the Middle East concerning the status of Jews.

The fire was also an attack on Tsetlinâ€™s place – her family’s place. It was the first synagogue where her brother worked, the synagogue that guided her family in their first few years as immigrants, the synagogue of her childhood.

Tsetlin followed in the footsteps of her half-brother, who began his search for identity at 14. “I grew up with a blank sheet of paper in terms of my Jewish background,” says Eliezer Bakaleynik, now 43. “There was no Jewish tradition there [in the former Soviet Union] for pretty much for two or three generations.”

As religion â€“ not just Judaism â€“ was frowned on in the former, atheist Soviet Union, Bakaleynik had to turn to underground organizations to learn. He eventually ran into a group of Jewish Russians who still practiced. “Meeting those people was like a time machine,” Bakaleynik says. “You’re connecting with people who grew up practicing Judaism and it was a very unusual thing.”

Yet Bakaleynik knew. He knew that this was his identity – the people, the practices, the very essence of Judaism spoke to him.

“When I saw Hebrew letters, for some reason it had some magical effect for me,” Bakaleynik says. “It’s very hard for me to explain, it’s more of an emotional reaction to me. And I’m not a mystical, emotional person…so my conclusion was that was my culture.”

Bakaleynik became so involved with Judaism that at 16, he decided to get a circumcision. His family supported him, even adopting traditions of their own, and Bakaleynik knew that after studying Christianity and eastern religions, after learning about other cultures, he had found his.

“The bottom line is, it’s a self discovery,” he says. “It’s who you are, and that discovery of who you are puts a very different perspective on your life.”

By 1988, this reclamation of identity would bring Bakaleynik to the United States. As it was quite impossible to practice Judaism in the former U.S.S.R., Bakaleynik and his family found the freedom to reclaim their roots in a new country.

Rita Polevoy, 22, has also claimed Judaism after years of disconnect. Polevoy immigrated to the United States from Minsk in 1992 at the age of four. Here, to help assimilate, she kicked off her education at a school for newly immigrated Russian students.

But after moving from Devon Avenue in Chicago to northwest suburban Buffalo Grove, a completely American neighborhood, she lost touch with other Russian children – and with her religion. In Polevoy’s words, she “got into American culture – all that kind of stuff.”

“I identify as Jewish, but I never knew what it meant and I never practiced,” Polevoy says. “It was like background music in an elevator.”

Later in high school, Polevoy met more Russians, and her history started coming back. This is where programs like Hillel and organizations such as the Jewish Community Center step in, indoctrinating young Jews into a more religious or observant lifestyle.

“I had a lot of friends in Hillel, and I started making acquaintances with the rabbis,â€ Polevoy says, â€œand I started learning what it all meant and where to go and how to ask questions.â€

Questions led to a new desire to travel to Israel. Last year, Polevoy took a three-week orthodox trip to Israel through J-life, an organization dedicated to the exploration and re-discovery of a Jewish identity for young Russian Jews in Chicago.

The trip transformed Polevoyâ€™s religious identity, as well as the rest of her familyâ€™s. Though her family is still secular, they swim in the orthodox community.

“We used to put up a Christmas tree for New Years, and we donâ€™t even do that anymore,” Polevoy says. “We light candles for Hanukkah.”

America was a different place for Jewish Russians who are now in their 20s and 30s. According to Marty Levine, director of the Chicago area Jewish Community Centers (JCCs), earlier Russians of Jewish descent could hardly escape that identity.

“Immigrants in the early 20th century came into a country that had huge barriers against religious identification for Jews and many minority groups,” Levine says, “and despite the sociological literature about ‘melting pot,’ America clearly was not a melting pot in the sense of everybody being one and the same. American culture clearly didnâ€™t allow deep integration.” 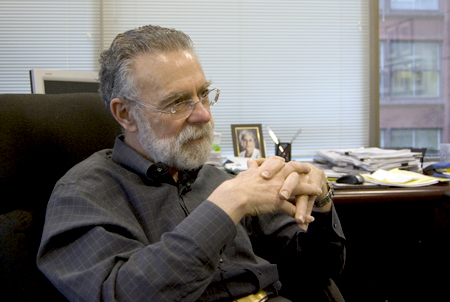 However, since the end of the Cold War in 1989 and of the Soviet Union in 1991, it became considerably easier to immigrate to the United States from the U.S.S.R., increasing the number of Jewish Russians. In the 1990s, the number of immigrants from the former U.S.S.R. to Chicago rose by 106%, from 19,048 in 1990 to 47,266 in 2000. Jewish Russians often immigrated due to the political and social oppression of Jewish citizens.

Thus in the more modern United States, with Jewish markers being less obvious than markers of other minorities, Levine says that many young Jewish Russians have the opportunity to choose their religious identity. The outside wall of oppression that forced this identity on those of Jewish descent does not exist here.

“The American challenge is if you take that outside wall away,” Levine says, “Jews now have the potential choice to just be like the mainstream society.”

Yet this freedom of choice can also revive longstanding traditions and identification practices that may have died within the walls of oppression. Young adults such as Polevoy have the opportunity to learn about their history from synagogues and organizations like the JCC. They may learn to retain â€“ or re-grow â€“ their Jewish roots.

“All American Jews, and certainly Russian Jews have had that choice,” Levine says. “So the question today is if American society stays as it isâ€¦are there reasons for me or my children or their children to choose to actually say ‘Iâ€™m a Jew’? And the challenge for the community is ‘Can I give you a reason why that heritage actually has value?'”

Part of the value for many Jewish young adults is the understanding of their past, of their tradition. Tsetlin often sees young teens visiting the synagogue on Friday nights, hoping to learn about their identity. She particularly recalled a recent visit to ‘Friday Night Live!’, a program at Heritage Russian Jewish Congregation created to appeal to the youth.

“It was very, very heartwarming to see young people who are not affiliated at all, and they come to the Shabbat. They’re Jewish, but they never learned it and their parents didn’t either,” Tsetlin says. “They’re the children of immigrants, 20 to 30 years old, and they come because they want to come; they want to learn more, they want to know.”

The first step in the road is curiosity; the second, knowledge. With modern technology opening channels of communication and sources of information, reclaiming Jewish identity is perhaps easier for today’s generation. Facebook ads amplify traditional flyers. Google can explain the basics, and searching for identity can be a click away.

“It’s all thanks to Facebook,” says Polevoy of her trip to Israel. “Otherwise I wouldnâ€™t have known about it. That Maimomedes Jewish learning program, birthright… they pop up in my ads. They really try to get us involved.”

“[Our religion is] something thatâ€™s been so unexplored for so many people for such a long time â€“ but at this point itâ€™s free information and itâ€™s free knowledge, and at this point you need to be open to accepting it and finding it just like anything in life.”

With this younger generation of re-identified Jewish Russians growing up and starting families, many have the new opportunity to guide the religious lives of their children.

By enrolling their children in Jewish programs and camps, lighting the Sabbath candles, or teaching them the language of their “people,” the 1.5 generation of Russians who came to the U.S. as children can choose to pass down their forgotten heritage.

“Every young family who decides to put a child in preschool or send a child to a camp or decide to do something Friday nightâ€¦ all of them are making that kind of choice,” Levine says.

Oftentimes these traditions are not just religious traditions; many families find it important that their children maintain their Russian roots and culture. Thus Russian Sunday schools have become popular, teaching children as young as three Russian literature, math and theatre, all in the Russian language. 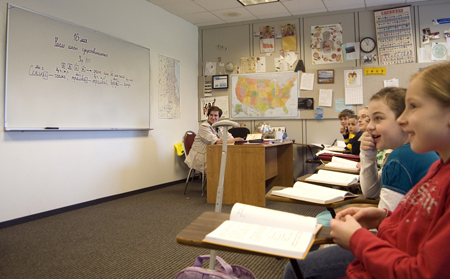 “I didn’t want to have a cultural gap [with my children],” says 38-year-old Sam Rozenfeld, who has three children in a Sunday school at the ORT Technical Institute in Skokie. “I want them to learn Russian. But to go beyond the kitchen language, they need to read and write in Russian.”

This is why the ORT Sunday School appeals to many families. What began as a small collection of nine teachers from the former U.S.S.R. has grown into a well-known institution with about 100 students. The school, which is a cultural school rather than a religious school, provides a venue for students to speak, read, write, and even act solely in Russian.

Most of the children are too young to understand the importance of their heritage; they speak flippantly in English when they can, complain of the homework load and question the importance of waking up before 9 a.m. on a Sunday morning. And the flow of cultural knowledge is not always a one-way road; Elizabeth, Sam’s daughter, is only ten but still corrects her father’s English.

“Dad, that’s not the word you use,” Elizabeth says to her father when he mentions “beading” as a class. “â€˜Craftsâ€™ is the word you’re looking for.”

For many who have lived all – or most – of their lives in the United States, their paths fall into place before them. Although this is not true for those who rekindle or find their sense of identity, this is true for Elizabeth and Tsetlin. Tsetlin was born in Vienna, en route to the United States. By then, her family had already claimed Judaism.

“I was one of those lucky ones who was just born into it,” Tsetlin says. “But nevertheless every day I choose. Every minute I choose whether Iâ€™m going to do this or not; itâ€™s become my way of life.”

Things like eating kosher, giving up technology for the Sabbath and practicing specific forms of prayer are not sacrifices for Tsetlin. These decisions are hardly burdensome; rather, they are the building blocks of her individual, religious identity.

“The first thing I do before I start my day is pray,” Tsetlin says. “Those 10, 15 minutes that I spend reflecting on how Iâ€™m going to be a person and connecting to God, I feel like it really makes my day. If I skip it, my day goes rough and I go ‘oh, itâ€™s ’cause I didnâ€™t pray’. I mean itâ€™s hard. You have to find those minutes and make time … I have to push myself, which makes it more meaningful at the same time.”

The F.R.E.E. synagogue has moved three blocks west of its former location on Devon Avenue. Both Tsetlin and her mother work for the synagogue and are close to the community. There are no longer Jewish bookstores or kosher supermarkets surrounding F.R.E.E., but it’s still very much Tsetlin’s place. And Friday nights still mean Shabbat – a dinner, a prayer, a tradition.