Escape, faith and dance: What it means to be Tibetan for Lobsang Yangphel

It was nothing like the Potala Palace, rightful abode of His Holiness the Dalai Lama. White and majestic. Hundreds of years old. Nestled in the Himalayan Mountains atop Marpo Ri, the “Red Hill.” No, this simple house in Dharamsala, India, seat of the Tibetan government-in-exile, was excruciatingly modest in comparison, not at all fit for the spiritual leader of Tibet.

When Lobsang Yangphel, a Tibetan carpenter, finally laid eyes upon the Dalai Lama’s current home, the culmination of his long, arduous journey from Tibet, the jarring disparity made him weep. This was not at all what he had imagined. But more overpowering for Yangphel was an immense feeling of relief. Penniless and weathered, he had finally made it.

“I could not believe it was real,” Yangphel says.

To arrive at that moment, Yangphel had traveled through Tibet, Nepal and India. It is a journey that is not uncommon. There are over 120,000 displaced Tibetans, according to the Central Tibetan administration, and Lobsang Yangphel is one of them.

Yangphel was born in Takse, a suburb of Lhasa, in 1962. For 27 years he lived there with his family, making a living as a carpenter.

On March 10, 1989, the 40th anniversary of the 1959 Tibetan Rebellion, Yangphel participated in a revolt against the Chinese government that would lead to his having to flee his motherland. Five days earlier on March 5, after a religious event had ended in a fatal conflict between Tibetans and Chinese police, large numbers of Tibetans began protesting in Lhasa, and on March 6, the Chinese government declared a state of emergency.

Violent conflict ensued. Yangphel likened it to Tiananmen Square. After the protest, the local Chinese police tracked down his name and the names of his friends. 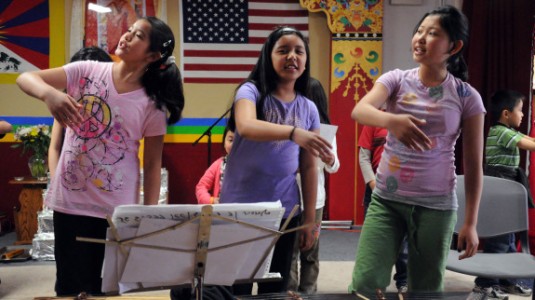 Yangphel's students sing traditional Tibetan music at the Tibetan Alliance of Chicago, 2422 Dempster Street. Yangphel did not want his face to be shown out of concern for the safety of his family in Tibet.

Yangphel knew his participation in the protests put him in real danger of being arrested, or worse, killed. So on March 10, he and three friends, with whom he had grown up and who were also carpenters, decided to escape. For about three months they hid in the mountains, living on a farm with nomads who took them in. Figuring that the Chinese would be busy celebrating, on June 1, International Children’s Day, which was adopted by the former Communist bloc, the four departed again. They stopped in Lhasa to pray for safety, then set off on a journey they hoped would take them to Dharamsala, India, headquarters of the Tibetan government-in-exile and home of the Dalai Lama.

For Yangphel, it meant saying goodbye to a mother, five siblings, and a land he had never left. For all of them, it meant a journey not just west, but up, down, over and through. On foot, Yangphel and his friends would have to traverse the treacherous Himalayas.

After 12 days Yangphel’s group reached Dhingri.Â They were tired and they needed more food for the next phase of their journey, which would involve climbing the Khumbo La mountain to cross into Nepal.

Desperate, they knocked on a strangerâ€™s door. An old man answered. Not sure they could trust him, the group concealed the true nature of their journey and claimed they were traveling to a border town to find jobs.

The old man knew they were lying. Others like them had passed Dhingri before, he told them, making the dangerous trip to Dharamsala. Lucky for them, he did not turn them in. He told them their clothes weren’t warm enough for the mountain trek ahead and that they should go back because, by his estimation, they would probably die.

They were not dissuaded. The group traded money and Yangphelâ€™s Chinese-made gold watch for pots, butter, cheese, salt and a ground roasted barley called tsampa.Â The next night, after sleeping at the old man’s house, they set off again.

They traveled mostly at night until they got to a high enough point that settlements, which they generally avoided, became uncommon. As they gradually ascended, they frequently crossed the frigid waters of the winding Khumbu River.

After five days, they reached the top of the Khumbo La mountain. A prayer flag and a large pillar signified the Tibet-Nepal border, and Yangphel and his companions stood in awe. It was the first time any of them had been out of their native Tibet.

Looking out from above the clouds, Yangphel remembered something his grandmother had told him long ago.

It was 7 p.m. when they reached the peak. The four friends were divided on what to do. Two wanted to c9ntinue ahead, but Yangphel and the other wanted to wait for the morning sun, when it wouldn’t be as snowy and dark. The argument escalated into a shouting match, and the four friends, who had known one another since childhood, separated, with two leaving Yangphel and the other behind.

“I didn’t think I would see them again,” Yangphel says.

About an hour later, however, the two returned. With them were two yak herders, whom they had met after seeing fire down the mountain. Â Now, the herders brought all of the Tibetans down to their camp and gave them tea, soup and a place to sleep.

The next morning, the herders told the four that to advance in their journey, they must reach the Thubten Choling Monastery, known for housing Tibetan refugees. To get there, the herders instructed them to follow the yak-borne trail of blood, produced by the jagged mountain ice that cuts their hooves, and dung left by the herds that every day traversed the route.

The group set off. On the fourth day, they saw the unmistakable roof of the monastery. They walked through the gates and, exhausted, passed out on some benches. Two hours later, they woke up on beds to monks spoonfeeding them tsampa mixed with butter and sugar. Their skin was black from the cold they had endured. But now they were warm. Now they were safe.

For seven days the group stayed at Thubten Choling, recovering under the monks’ care. Then they set of for Shakhum Deling, a remote Tibetan settlement high in the mountains to which the monks directed them. They stayed there three months, using their carpentry skills to fix things like the door of the settlement office and the windows in the school. In exchange they were given room and board.

When they resumed their journey, the head of the settlement provided them a guide because they did not understand the Nepalese language. They reached Kathmandu, Nepal and spent about two weeks in the Tibetan Refugee Reception Center, which is jointly funded by the United Nations High Commissioner for Refugees (UNHCR) and the Central Tibetan Administration, learning Hindi phrases and other basics about how to get around in India.

When a police officer checked the bus at the India-Nepal border, they tried to act inconspicuous by reading the Nepali-language newspaper to conceal their Tibetan identities. The tactic worked. They continued to Delhi and from there on to Dharamsala, readying themselves for what they had so long dreamed.

As soon as they arrived, they went straight where they knew the Dalai Lama lived. What they saw made them weep.

“It was not what I had dreamed,” Yangphel said. “It made me very sad.”

Despite this, Yangphel was excited to finally meet the Dalai Lama. After a security check that lasted seven days, the time had come.

It was morning. At the Dalai Lama’s residence, Yangphel, his friends and about 20 other Tibetans knelt in a row as the Dalai Lama received them.

“When I saw his smiling face, I thought, ‘It’s real, today it’s real,” Yangphel says. “My body was a little bit shaking. When we finished, then we cry. The Dalai Lama, he says, ‘Be happy. Now you are in the free country.’ And I feel very happy.”

The Dalai Lama encouraged them to go to school and learn English, and that’s what they did. Yangphel studied English in Dharamsala for one year, then became a Tibetan music and dance teacher. From a young age he had known those arts, having learned them from his grandparents, and now he passed them on to refugee youth in India.

Yangphel was prepared to live out his life in Dharamsala. But in the summer of 1993, everything changed. The United States, for the first and only time, allowed one thousand Tibetans to move to America with immigrant, rather than refugee, status. Yangphel won the lottery that was held. He was the thousandth Tibetan selected.

At first he didn’t want to go. He had no family in America, knew little about the place and didn’t want to leave his friends. He didn’t even speak English. But his friends saw the value in the opportunity urged him on. The headmaster of the school where he worked sealed the deal, telling him the school would cover the cost of his passport and other expenses.

On the plane ride, the first he ever took, Yangphel peered out the window at the diminishing topography he had grown so used to over the last four years. Once again he was above the clouds, just like on Khumbo La.

But, despite his awe at human flight, the view was not anything he had not seen before.

Yangphel arrived in Chicago onÂ September 13, 1993. He lived near other resettled Tibetans in Uptown, on a street behind Truman College. For six years he worked at the InterContinental Hotel, cleaning rooms and washing dishes. Then he secured a job at Ortho Seating working as a carpenter, his chosen craft. Now, after 15 years, he has risen to Assembly Leader.

Yangphelâ€™s three friends, with whom he embarked on an incredible international journey, live in India. They too work as carpenters. Yangphel sends them money. â€œIf I stayed in India, I can do nothing for them,â€ Yangphel reasons.

Yangphel spends much of his spare time at theÂ Tibetan Alliance of Chicago (TAC), where he volunteers Sundays as music and dance teacher. After he first arrived, he had taught classes inÂ his apartment complex’s laundry room and in the alley behind the building. Some years later, after Chicago’s Tibetan Resettlement Project was converted into the TAC, Yangphel led the effort to construct a building just for the TAC. That was two years ago; now, the place is a center for Chicago’s Tibetan community.

Tenzin Nordon, 19, is a graduate from Yangphelâ€™s classes at the Tibetan Alliance of Chicago. In 1998, she came from Dharamsala with her family. Now, Nordon is a biology major at the University of Illinois at Chicago. She has learned enough from Yangphel that she too can teach younger children to play traditional Tibetan instruments like the yangji and dramyin, she says.

â€œHeâ€™s a father figure for us,â€ Nordon says. â€œFor the kids in my generation, heâ€™s been teaching us, guiding us through life, everything. Itâ€™s not just dance and music. Heâ€™s been there every weekend telling us what to do in life and what to not do in life. He taught us dignity, devotion, commitment and what it means to be Tibetan.â€