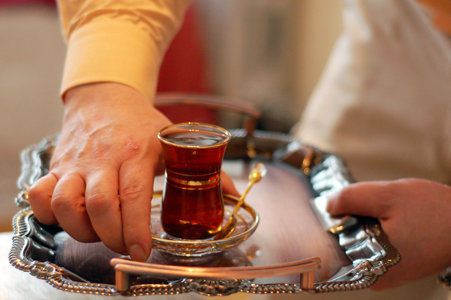 Omar Muhammad serves traditional Iraqi chai tea in a cup brought from his home in Baghdad. Photo by Blake Sobczak.

In Chicago, where Omar has lived since last December, bearing such a slight connection to a centuries-old figure means nothing. But in Baghdad, where he grew up, it meant the difference between life and death.

Muhammad didnâ€™t always have to worry about his given name. After the U.S. invasion in 2003, religious tension boiled over between the Shiâ€™ites and the Sunnis. Minority Christians, historically targets for persecution in Iraq, were also violently driven out of the nationâ€™s capital. Prior to the war, such conflict never factored into Muhammadâ€™s everyday life.

[audio:https://immigrantconnect.medill.northwestern.edu/wp-content/uploads/2010/06/sunni-or-shia.mp3] Muhammad says he too wonders why things changed so dramatically after the invasion.

Though he did not realize it at the time, Muhammadâ€™s decision to work for the U.S. Army in 2006 set him on a path to America. He did not seriously consider leaving Iraq until 2008â€”a full year after terrorists bombed his home. His service with the Armed Forces as an interpreter allowed him to get special immigration status in 2009. He soon moved to Chicago with his wife and two sons and acquired his green card within one week. (Typical refugees resettled to the U.S. must wait one year before getting a green card.)

Muhammadâ€™s journey to America was not easy, and his adjustment here is far from over. He is currently unemployed, and heâ€™s afraid he wonâ€™t be able to find another place to live by next month, when he must move out of his current apartment. He worries about his wife, who is back in Iraq attending to family, and his children, who are having difficulty learning English and adapting to the culture here.

â€œThis area is not good for the kids,â€ Muhammad says. â€œI donâ€™t believe that the schools are good. Sometimes the teachers speak Spanish, so they understand nothing.â€ When asked what is the hardest part of his adjustment here, he points to his two young sons Alfarooq and Khattab.

Itâ€™s a warm Sunday afternoon and Khattab, Muhammadâ€™s older son, is sitting near the cramped kitchen, immersed in the video game Grand Theft Auto. â€œThis is how itâ€™s done in Iraq,â€ the 13-year-old explains, shooting down a passerby in the game with a pistol. Alfarooq, 11, stands nearby, playing with a gun application on his fatherâ€™s iPhone that makes the phone rattle like an automatic weapon. 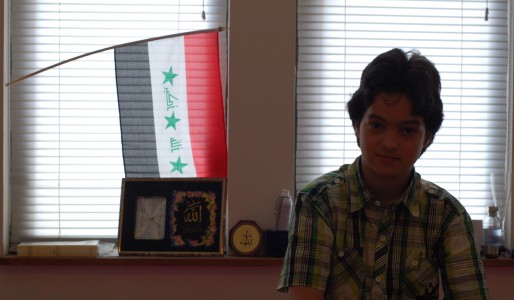 Muhammad's older son Khattab sits next to an Iraqi flag in the family's apartment. Photo by Blake Sobczak.

Gunfire was a familiar sound in Iraq, as unremarkable as honking cars or barking dogs. Even in the wealthy area where the Muhammad family lived, militants often shot at windows or fences and ran.

[audio:https://immigrantconnect.medill.northwestern.edu/wp-content/uploads/2010/06/neighborhood.mp3] Muhammad describes what it was like back in Baghdad.

Organized attacks were rare, although the Muhammad home was more vulnerable because it sat on a corner at an entrance to the upper-class neighborhood. That vulnerability became shockingly clear in January 2007, when terrorists bombed the Muhammadsâ€™ home while Muhammad was still inside.

â€œIt was me, my dad, my wife, my mom and my brothers,â€ he recalls. â€œMy kids were both north of Iraq. No [one was hurt] because itâ€™s a huge home.â€

The effects of the bombing still linger, creeping into Muhammad”s everyday life. â€œWhen I speak with you, I feel that there is a bomb around me,â€ he says. â€œAll the time I’m hearing bombs.â€

Although no one was hurt in the bombing, the incident made Muhammad realize how dangerous the situation had become for his family. His father, wife and kids moved to Syria after the bombing, but he continued working with the U.S. forces in Iraq. Every few weeks, he visited his family in Syria.

â€œMy father was a [retired] general [in the Iraqi Army], we are Sunni, and I work with the Americans. These are the three reasons to get shot,â€ Omar recalls. â€œIâ€™d say goodbye to my wife, because I donâ€™t know if Iâ€™ll come back or not. I just donâ€™t know. On the missions, we left death behind us so many times.â€ 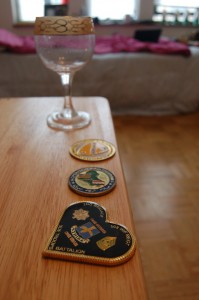 Several of Omar's medals, awarded for service with the U.S. Armed Forces in Iraq. Photo by Blake Sobczak.

Muhammad worked closely with groups of U.S. soldiers for intervals of up to twelve months, explaining Iraqi culture and translating between English and Arabic. Many of his missions took him with bomb technicians south of Baghdad, where he worked to clear the roads of I.E.D.s and other explosives. The job was dangerous. He tried to keep it a secret from his wife, but she found out after a few months when he returned home one day scarred by an explosion. His friends in the Army nicknamed him Zach.

[audio:https://immigrantconnect.medill.northwestern.edu/wp-content/uploads/2010/06/bombs.mp3] Muhammad describes his first mission, and the pretense that it wasn’t dangerous.

Muhammadâ€™s typical workday with the U.S. troops lasted about 11 hours. He might encounter anywhere from two to a half dozen bombs on each missionâ€”sometimes more. On his current resume, he describes himself as â€œmotivated and calm in highly dangerous situations.â€ He wants to find a position that meets his unique skills, but itâ€™s not surprising that the experience he gained in Iraq doesnâ€™t easily translate to a peaceful country.

â€œWhatâ€™s interesting about the [Iraqi special immigrant visa] population is that they develop skills in line with the environment that theyâ€™re living in,â€ explains Allie Levinsky, 30. Levinsky is a jobseeker services adviser for Upwardly Global, a nonprofit organization that helps skilled immigrants, refugees and asylees reclaim their old careers in the U.S. â€œCultural liaisons with the U.S. military face significant challenges in their job search, because how do you market these skills in a non-war zone?â€ she notes.

Muhammad used to work with the Red Cross in Iraq, where he volunteered for several years before becoming disaster relief coordinator in 2001. He has a diploma from the Fine Arts Institute in Baghdad as well as a bachelorâ€™s degree in French from the Baghdad University College of Foreign Languages. He speaks Arabic, French and English and can read and write in Russian.

He admits that he could probably find a job, but he wonâ€™t take just any position. He wants to work in security, medicine, or with the Army again, albeit not in Iraq. But jobs with the Red Cross are hard to come by and Muhammad has passed the 35 year age limit for regular service in the Army.

Itâ€™s not that he is being picky. Nora Brathol, a volunteer with Interfaith Refugee and Immigration Ministries, has worked with unemployed Iraqis and is familiar with the phenomenon of underemployment for skilled immigrants. â€œYou see doctors, lawyers; people who were very highly educated,â€ she explains. â€œAnd then to come here and not have those degrees transferable – to go from being a doctor performing surgery in a hospital to being the janitor in a hospital – itâ€™s quite a challenge.â€

[audio:https://immigrantconnect.medill.northwestern.edu/wp-content/uploads/2010/06/put-yourself-in-my-shoes.mp3] Muhammad talks about coming to terms with the prospect of a job he is over-qualified for.

Despite his job search woes, Muhammad is content in Chicago and cannot imagine returning to Baghdad. After struggling for nearly two years to get his visa through the U.S. embassy, he recalls his reaction on the day he left Iraq.

â€œI was crying. I was so happyâ€¦ Itâ€™s in my heartâ€”ice and fire,â€ he says, clutching his chest. â€œI donâ€™t want to go back there anymore. I want to change my life, my country, change everythingâ€”but Iraq is still in my blood.â€

[For safety reasons, Omar Muhammad’s last name is a pseudonym.]