Health made harder: How Latino families translate the system 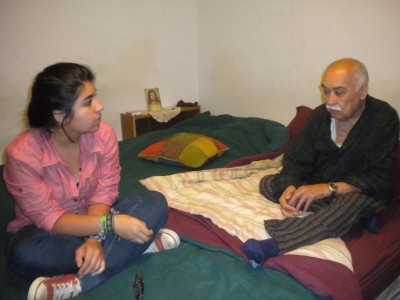 Since before Carla Argueta could drive, she remembers going with her Guatemalan grandfather, Raul Arnoldo Argueta Rodriguez, to his many medical appointments.

Noldo, she affectionately calls him, doesnâ€™t speak English, which often has had him rely on family members to translate when his health care providers does not include a bilingual staffer. When Arguetaâ€™s parents can’t take time away from work, she often finds herself trying to convey the important medical directions and questions between medical personnel and her grandfather.

â€œWhen I was younger I always felt really awkward and uncomfortable because I wasnâ€™t sure I was translating right,â€ says Argueta, who is now 22. â€œI felt like I sounded stupid.â€

Noldo laughs as he rattles off in Spanish the many infirmities heâ€™s developed in old age ranging from diabetes to treatment for a broken pelvis he suffered on his last hunting trip. â€œHe thinks heâ€™s young,â€ interjects Argueta.

Despite countless trips to the doctor, Argueta doesn’t mind pitching in. She realizes she still has the support of her bilingual parents. She doesn’t carry the burden alone, and she’s never concerned with her familiesâ€™ ability to pay. Working directly with newly arrived refugee and immigrant populations at Heartland Alliance, she sees examples of children carrying out more extensive and often singular roles.

Navigating the health care system can be an arduous task for any individual, but within the Latino community it can present unique challenges that not only influence individual access to adequate care, but take a toll on the family, potentially creating rifts between and among generations of Hispanics.

A domino effect takes place. Cultural and language barriers coupled with low numbers of Latinos entering the medical field contribute to the lack of education and preventive care in predominately Latino communities, which in turn results in disproportionately high rates of preventable disease, including diabetes, childhood obesity, high blood pressure, and malnutrition.

More specifically, according to the U.S. Office of Minority Health, Hispanics are 1.5 times as likely to develop type two diabetes, and 10.4 percent of Hispanics/Latinos ages 20 years or older have already been diagnosed with diabetes.

â€œThe health care system in particular digs a wedge between the family system,â€ laments Eva Hernandez-Thomas, who works with the University of Illinois Chicagoâ€™s School of Public Healthâ€™s Department of Epidemiology and Biostatistics. By giving youth the role of interpreting what information to give to their parents and by not placing emphasis on family-based decision and consent, a complicated health care system reverses traditional Latino family roles, she explains.

As a clinical psychiatric nurse and also a certified clinical psychologist in Mexico, Hernandez-Thomas has observed adjustments that different generations have to make in order to navigate the system.Â  She believes that it causes more issues than just sugarcoated translations and compromised confidentiality that occur when family members step in.

Care From a Distance

What happens when no family member is available to translate? Lisa Chaidez is a nursing student who has learned hands on at Provena St. Joseph Medical Center in Joliet that being one of the only Spanish speakers, she is often pulled from her nursing duties to interpret for patients.

When no bilingual speaker is around, however, patients in most facilities have to rely on phone exchanges.Â They pick up one end from their room and have a three-way conference call between themselves, their doctor, and a distant translator.

â€œYou are supposed to be able to form some kind of bond with your patient while they are in the hospital, some kind of trust,â€ says Chaidez. And by phone, patients miss out on important instructions.

What persists is a health care system that falls short in catering to the diverse needs of those it serves. Will the newly passed yet untested health care legislation bring the reform thatâ€™s touted to the Latino community?

Carla Argueta at the May Day Immigration March

According to the U.S. Office of Minority Health, Hispanics have the highest uninsured rates of any racial or ethnic group within the United States. The Pew Hispanic Center reports that while 25% of documented immigrants are uninsured, the rate is much higher among the undocumented, around 59%.

This issue is politically inflammatory, as was evident when President Barack Obama specifically addressed in his September 2009 speech to Congress whether health care reform covers the undocumented. The iconic moment is captured in the exchange between President Obama and Republican Congressman Joe Wilson who blurted out, “you lie,” after the President said emphatically that “the reforms I’m proposing would not apply to those who are here illegally.”

Newsweek recently reported that the 8% of U.S. residents that the Congressional Budget Office estimates will remain uninsured once health reform is implemented “will still be disproportionately Latino, largely because the bill limits insurance options for new immigrants, both legal and illegal.”

Chaidez recalls the desperation of one undocumented woman she talked to on an emergency health care helpline for Spanish speakers.Â The womanâ€™s appendix had ruptured and sheâ€™d rushed to the emergency room for surgery.Â Panicked, she used someone elseâ€™s insurance card to cover the cost, committing an act of fraud.

â€œShe asked, â€˜What if I told you I used someone elseâ€™s insurance card for a surgery I needed? What would happen to me?â€™ And I felt so bad,â€ recounts Chaidez. â€œShe was undocumented and didnâ€™t have insurance, and there was no other way to do it.â€

Health care costs often keep the uninsured from seeking help until they are forced to resort to an emergency room visit.Â  This not only results in unmanageable costs but further separates community members from relationships with health care professionals.

Strengthening the relationship between patients and providers, as Hernandez contends, â€œis a two-way street.â€Â And while the need for bilingual and bicultural practitioners in the health care arena is the first step to bridging the gap, addressing illness is intertwined with the issue.

“[The Latino/a] community is still heavily dependent on treatment versus prevention,â€ says Amanda Caballero-Holmes, a Latina health care and prevention consultant based in Chicago.Â â€œThatâ€™s where the health care system as a whole needs to shift the focus to.â€

A system that educates members of the Latino community about culturally-specific health practices, contends Caballero-Holmes, can transform the outlook on health care.Â  Prevention-based programming in schools and communities around Chicago is already starting the transition to a more engaged health care system.

The most important aspect of the center, says Director Dan Fulwiler, is providing access to care for residents of Pilsen, Little Village, and Brighton Park regardless of ability to pay.Â Fulwiler estimates about 70-80% of their patients communicate in Spanish with their doctors. 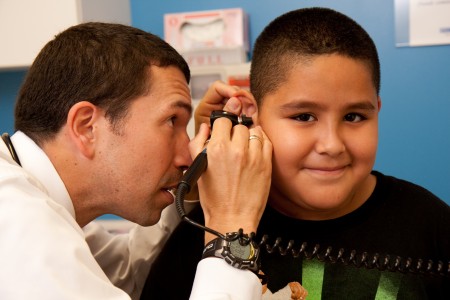 Esperanza also offers a variety of programming including a Reach Out and Read literacy program, giving a book to each child during his or her yearly well visit.Â They work to make healthy eating education culturally specific by utilizing â€œEl Plato de Buen Comer,â€ Mexicoâ€™s version of the FDAâ€™s food pyramid, in their school workshops.

The waiting room of Esperanza is a bustling scene.Â The walls are painted in bright colors and an entire wall is devoted to play and lined with books and toys.Â Bringing the health care focus back to the family, Esperanza is a refreshing opportunity for many to have a personal relationship with their doctor and avoid the â€œdoc in a boxâ€ care they receive from other facilities.

Community-based prevention programming could be the key that brings the multi-generational Latino family together around health care.

“It takes time, it takes education, it takes everyone being invested to make those outcomes,â€ said Caballero-Holmes.Â â€œBut itâ€™s worth it.â€