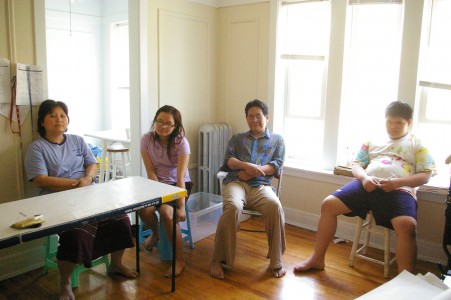 Pyaohn and his family in their Chicago apartment

His journey from Burma to Tham Hin refugee camp in Thailand to finally ending up in Chicago was wrought with impossibilities. The obstacles that Ernest Pyaohn, a Karen Burmese father and husband, faced were often beyond his control. But defiantly, he worked against those who held power over him, holding steadfast to his passion for human rights.

BACK HOME IN BURMA

Pyaohn held many different jobs while living in Burma. From working in a health clinic as a liaison between doctors and patients, which in a way mirrors his current employment, to working in schools in a revolutionary area, Pyaohn felt bound in his position.

In Burma, in order to be promoted in a job, it was necessary to know someone in higher places, according to Pyaohn. His father had to quit his job because a corrupt government refused to promote personnel based on merit and experience.

He found similar problems while working with the Karen National Union (KNU). He was working as a school teacher, but without a salary. This created problems when he met Gaw Mu, the women he would eventually marry, because according to Burmese customs, Pyaohn was expected to be financially secure before he proposed.

Despite the lack of salary, Pyaohn and Gaw Mu were left with no choice. Leaving the KNU area in southern Burma was uncertain and dangerous, whether they went to Thailand or to another location in Burma.

All the while, political unrest was apparent in the area Gaw Mu and Pyaohn were living. In 1987, only one month before Gaw Mu was to give birth to their first child, the Burmese army entered their town. During the occupation, she had to flee temporarily across the border to Thailand.

Pyaohn, however, had to stay behind in their village. The situation was precarious, as they had no protection from the mortar rounds, and no choice but to do as the army said. Pyaohn was responsible for removing the injured and deadÂ  from the streets and for the upkeep of sanitation in the village.

Through it all, Pyaohn was separated from his wife. Being alone brought new fears into perspective and turned staying alive into an achievement.

[audio:https://immigrantconnect.medill.northwestern.edu/wp-content/uploads/2010/06/3Proud.mp3|titles=3Proud] Pyaohn and Gaw Mu talk about the sense of pride that brought.

Only two weeks after Gaw Mu returned, she gave birth. Soon after, the family faced an unanticipated crisis. The baby boy needed medical attention. But there was no money to travel to Thailand to take him to the hospital. He died after only 45 days.

Ten years later, the army returned, but this time was different. Pyaohn knew that his family needed to leave Burma. He now had two daughters and a son to consider.

“We had no hope to go back and live like an ordinary person,” Pyaohn says.

Again, Pyaohn was forced to stay behind. His wife and children were driven by truck across the border to Tham Hin refugee camp. He could not accompany them because the camp at the time was only accepting women and children, so he had to consider more covert methods.

Months later, he left for Thailand with the help of a “path finder.” Having already made the trip, the path finder could tell Pyaohn and his friends and neighbors what they should bring, and warn them of the dangers ahead. Walking together, they depended on each other for survival.

“We lived together closely and we shared our food. Everybody had to carry a bag of rice,” Pyaohn says. 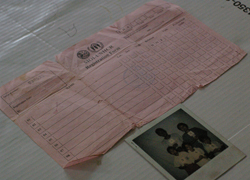 Pyaohn's family was registered as refugees by the UNHCR.

[audio:https://immigrantconnect.medill.northwestern.edu/wp-content/uploads/2010/06/We-live-together-closely.mp3|titles=We live together closely and share our food] Pyaohn recalls the trip.

CORRUPTION IN THE CAMP

After one year of being apart from his family, alone in Burma, Pyaohn arrived at Tham Hin under the cover of night. “At that time, most people fall asleep, especially the Thai paramilitary,” Pyaohn explains.

Being reunited with his family was not a difficult task. He already knew where they were living, and the Burmese guards at the refugee camp were easy to work with.

After about a year, that changed. It became apparent that the system within the refugee camp was corrupt. As a result, he was left unable to find work.

“In [the] refugee camp, you can get a job if you go along with the camp leader, [who is] like a chairman. They have full authority because they are working with [the] NGOs,” Pyaohn says.

The issue became too big for Pyaohn to ignore. He gathered his friends and they started speaking out against the way the camp was run by the upper level KNU leaders.

“In 1999 I started to struggle about equal rights,” Pyaohn says. “Why are we divided although we are in the same refugee camp, in the same position? We come from the same place. Why [do] some people take special advantage?”

The camp officials, comprised of mostly Karen Burmese, forced other refugees to do manual labor without a salary, working on buildings in the camp.

At one point, the camp leaders also mandated that the Karen people pay for their ration cards, a decision Pyaohn and seven others protested.

Pyaohn’s efforts caught the attention of the leaders. Those who protested the payment for ration cards had their rations docked for 11- 42 days. Pyaohn and the others were accused of being traitors to the Karen people. They became vulnerable to reprisal on all sides.

Due to harsh conditions and fearing for the family’s safety, Pyaohn began writing letters to the United Nations High Commissioner for Refugees (UNHCR) around 2003. He and Gaw Mu asked for their family to be permanently resettled outside of Thailand. However, at the time, Karen people were not being resettled, despite the fact that other Burmese were already being resettled.

“It belongs with the politics,” Pyaohn says.

Politics are often a factor in determining who will be resettled in a third country, says Darwensi Clark, manager of resettlement, placement and adjustment services for refugees for the Heartland Alliance in Chicago. The UNHCR and Overseas Processing Entity (OPE) share responsibility for choosing refugees for resettlement and determining where they will go. 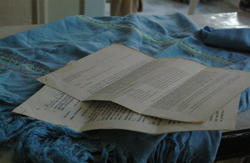 Just two of the many letters Pyaohn and Gaw Mu wrote to various agencies requesting to be resettled.

OPE is directly accountable to the U.S. State Department and, “there is definitely some diplomacy,” Clark said.

Despite all his attempts to appeal to the UNHCR and other authorities, Pyaohn had no control over the situation. His fate and choices rested in the hands of organizations and governments.

WORKING THROUGH THE SYSTEM IN AMERICA

Finally in 2006, the Karen Burmese refugees were able to enter the UNHCR’s lottery for resettlement. The Pyaohn family was lucky enough to be chosen as one of the first waves of families resettled in Chicago. While they faced challenges, as any refugee family would, Pyaohn was optimistic about the challenge.

“For our family, [the resettlement agency did] the best,” Pyaohn says. World Relief, the agency handling the Pyaohns’ case found Pyaohn a job at the airport when he first arrived. Pyaohn had no expectations for any specific jobs when he came to Chicago, focusing only on supporting his family by any means necessary.

Regardless of his willingness to work, he struggled with the two-hour commute from his home to O’Hare airport. Added to that, the job involved walking long distances, often at night and the pay was quite low.

After a few months, he was able to move to a new job, with the help of a World Relief job counselor, at the Tyson Meat Factory. This was a change of pace, and much closer to home. There he had more opportunities for a raise or a promotion, and started out at a higher salary.

But even this job came to end when Pyaohn’s job counselor informed him of an opening at Heartland Alliance. The agency was looking for a health promoter, which involved translating and interpreting for a local health clinic.

He now works twice a week at the clinic, where he is an invaluable asset to the refugee program. The program provides those first arriving in the U.S. with the proper medical assistance. Maza Mengesha, Pyaohn’s supervisor,Â  praises his dedication and says that he is constantly busy. He’s often called to multiple different departments at the clinic all at once. 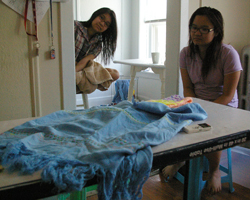 “He goes the extra mile to help Burmese refugees,” Mengesha says. “His title is interpreter, but he does so much more.”

Pyaohn enjoys the job because the staff there treat him like family.

He also takes pride in his ability to help his people settle into Chicago, despite the cultural road bumps along the way and the stress of the work.

“I do not want to make any mistake. Especially working at the clinic, it’s fully difficult and highly demanding,” Pyaohn says.

He realizes that, unlike in Burma, where you needed a personal connection to ascend the ranks, in America, success depends mostly on hard work.

As refugees, Pyaohn and his family were faced with many situations that afforded them no choice. But Pyaohn’s focus on human rights and the desire to provide for his family has led him to speak out on behalf of his people. He acknowledges the natural barriers, such as age and time, to realizing his career goals now, but for Pyaohn, there’s something far more important than opportunity; and that is braving the truth and attaining dignity.