My homeland is a suitcase: The story of Palestinian refugee Awad Sifri 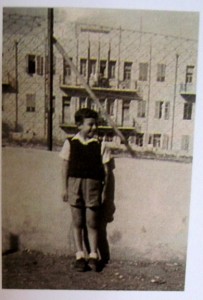 Awad Sifri recalls his German neighbors bringing chocolate bars to him and his baby sister Randa when he was 6 years old. On warmer days, he ran around his yard under the shade of a large tree playing cowboys and Indians.

But this was Haifa, Palestine, in the 1940s, and Sifri was actuallyÂ growing up in the shadows of burgeoning conflict. His parents provided young Sifri with only a simplistic understanding of the growing tension around them.

Now,Â  more than 60 years later, he looks back on his childhood with animatedÂ memories of just how big his dreams were as he gazed out at Mount Carmel.

Sifri’s dreams of a future in Palestine were dashed one day in 1948 when his mother burst through the door of his first grade classroom.

Hastily they returned to their house to grab Randa and one suitcase of clothes before driving off.

Sifriâ€™s father, an aviation manager for the Iraq Petroleum Company, had secured seats in one of the last company flights to Lebanon. He sent his wife and children to spend some time at the Hotel Mont Vert in Brummana, Lebanon until they could return safely to Haifa.

RandaÂ recalls lazy days swimming with children from many cultures.Â Â In fact, those days playing at the hotel with her brother formed her earliest memories.Â The trip was supposed to be a brief hideaway and though it was pleasant in many respects, it was lasting longer than expected.

The family didnâ€™t know they would never return to their home in Haifa again. They never foresaw that things would only get worse. Â Weeks turned to months.

Sifriâ€™s father managed to ship his sonâ€™s favorite possession, a sturdy, German-made tricycle, on a flight into Beirut. The trike made him popular with the kids at the hotel but it was evidence of that slow but constant trickle of family, neighbors and possessions from Haifa to Lebanon that made their displacement seem increasingly permanent.Â  Sifri’sÂ aunt and grandmother would need to escape Haifa by rowboat to Lebanon in a treacherous flight that almost cost them their lives.Â Despite the influx of people and possessions, Randa and Sifri didnâ€™t know when their father would finally be joining them. They began to worry more when money started to run out.

Meanwhile, as conditions worsened back at the Sifri’s home, the Iraq Petroleum Company was forced to shut down their pipes to Haifa.Â  Sifriâ€™s father boarded up the doors to their house, finally leaving all their possessions behind on his way to join his family in Lebanon. 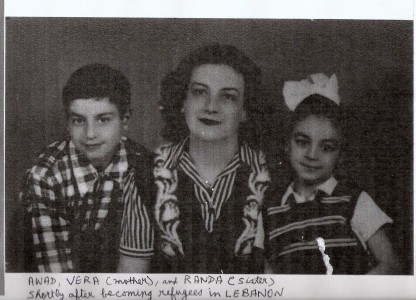 Awad Sifri (left) with his mother, Vera, and sister, Randa, shortly after becoming refugees in Lebanon in 1948.

Within weeks of his father’s arrival in Brummana, the family got word that the Iraq Petroleum Company was to open a new branch in Tripoli, Lebanon, along the Mediterranean shore north of Beirut, and invited his father on board. They rented a house in a nice neighborhood and Sifri soon started to attend The American Boys School. Â Sifri’s uncle got work nearby as well, overseeing UN-run Palestinian refugee camps on the outskirts of Tripoli.

Some young boys from the camp attended Sifriâ€™s school. He remembers them being ostracized by the other children because their clothes were tattered and their English pronunciations were poor.Â  Sifri remembers feeling bad for the boys from the camp because he knew that they lived on monthly rations of flour and rice from the UN. In the camps, they had nothing but tents to shield them from the winter weather.

Even though their exile looked different than his own, Sifri felt a connection with the boys in the camp through their shared identity as Palestinians. Both Sifri and his sister participated in aid programs for the less fortunate Palestinians who lived in the camps. Despite Â theirÂ willingnessÂ to help, however, Sifri and Randa were only given limitedÂ access to the camp due to UN restrictions.

Sifri spent one summer volunteering after high school and Randa worked with womenâ€™s programs that provided income to families in the camps by selling handiwork. The money was crucial for the people in the camps because Palestinians’ job opportunities were limited because the Lebanese government could not risk the jobs of its own citizens. Sifri’s family avoided that fate because they were Christian and so they qualified for Lebanese citizenship for political reasons. Their citizenship allowed them to work freely in skilled positions that paid decently, unlike those in the camps who were limited to shining shoes or other low-paying jobs.

Sifri had always been fascinated with American culture. Even during his days in Haifa, he loved Western movies. His early childhood days of playing cowboys and Indians factored into the allure of attending university in the United States. Â He decided to leave his parents and his sister in Lebanon to go to college in North Carolina.

By the time he attended college, nearly 15 years and three different cities distanced him from his childhood memories of Haifa. But heÂ  still felt deeply connected to Palestine.Â  One day he was called upon to give a speech on Palestinian rights and identity. Though in the past his voice was subdued, in this pivitol moment Sifri overcame his fear of public speaking and jumpstarted his venture into activism.

Sifri’s activism Â is typical of Palestinian refugees.Â Though Palestinians are denied a labeled space on mainstream maps, many maintain a strong connection to their homeland, says Miryam Rashid, the Middle East program director for the American Friends Service Committee – Chicago. “There is a common threat among Palestinian refugees,” says Rashid. “They certainly have a strong identity. I think their identity is even stronger because there has never been an official apology so it’s like an open wound that continues to make Palestinian a central part of their identity.”

Sifri remembers meeting children born in Lebanon to Palestinian refugees who identified as being from Palestine even though they had never been allowed to go there. Sifri eventually came to work for McDonaldâ€™s on the corporate level, traveling and living everywhere from Bahrain to Brussels and opening McDonaldâ€™s in over 60 countries.

Sifri is now a U.S. citizen and his wife Rhoda is American, yet he unwavering identifies as a Palestinian.Â  Though he is appreciative of the open and diverse world view his life has afforded him, he remains insistent that his passport say Palestine as his country of origin. 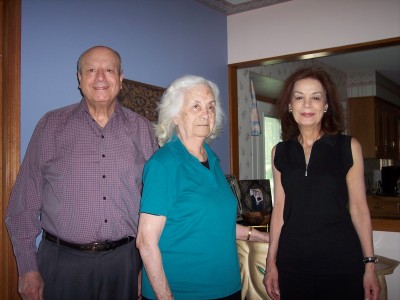 Sifri and his sister, Randa Helfter, visit with their mother, Vera Sifri, in Naperville, outside Chicago.

Over the years he hasÂ continuedÂ his advocacy for Palestinian rights,Â speaking in churches and schools.Â Â He has written hundreds ofÂ editorials and respondedÂ to blogs about the state of the conflict. Annually, he joins other Palestinian supporters in a march through Naperville, outside Chicago, where he now lives with Rhoda.
Their house is beautiful and inviting. Itâ€™s decorated with the relics of his lifetime of world travel. On the front stoop is a hoe; Rhoda likes to garden. On the walls and mantelpieces are pictures of their two daughters and their grandchildren. When we come for the interview, Rhoda offers us tea and baked goods while Sifri takes our coats. Through small talk, he tells us that his mother, at the age of 91, lives in an apartment nearby. It is amazing that a lifetime of seeking refuge has led him to a life so settled. As we settle into a comfortable sofa, Sifri pulls out a few photo albums. He begins showing us photos of his family in Haifa, Jerusalem, and Galilee.

[audio:https://immigrantconnect.medill.northwestern.edu/wp-content/uploads/2010/06/photo-dialogue.mp3] Listen to Sifri and his family flip through their albums of memories.

As we look, he tells us whether or not the people in the photographs were able to leave Palestine and what became of them. He flips through the pages with a combination of excitement, nostalgia and matter-of-factness. Some of the stories have happy endings. Others do not.

His blind aunt, Marie, was detained when she tried to return to Haifa in the early 1950â€™s to visit friends and family who remained. He says that Israeli officials didn’t let her return to where she was staying as a refugee in Lebanon. Marie was not only barred from returning to Lebanon but also disallowed from returning to her home in Haifa, Sifri says. She was stuck at the Israeli border, in limbo and as a guarded prisoner, until she passed away prematurely. When the family received news of this in Lebanon, they wereÂ devastatedÂ that she spent the last years of her life alone and unhappy.

During our journey through the photo albums, Sifri got up from the couch and offered to show us a collage one of his daughters made him as a gift. The collage was made up of two photos along with a batch of poems.Â  We were drawn to the first photo: Awad Sifri, age 6, standing in front of a neighborhood building in Haifa, Palestine.

The second photo, however, was more surprising.Â  In a nearly identical picture, Awad Sifri, age 55, stood in front of the same spot in Haifa, Israel.Â  Many exiled Palestinians have difficulty returning to their homes, even to visit.Â Sifriâ€™s high-powered position with McDonald’s allowed him a rare experience- the chance to return to his homeland.

In 1996, Sifriâ€™s arrived in Haifa to open a new McDonaldâ€™s in the city. Â He and a colleague decided to go looking for his childhood home and see how it had fared. 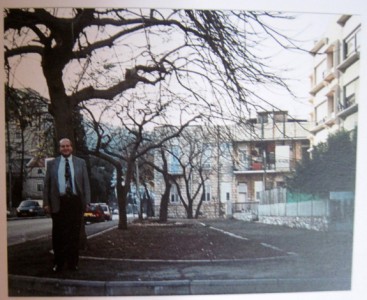 Here is Sifri in front of his childhood home in Haifa, Israel, when he returned in 1996 for business.

When they got to his old street, his house was still there. Suddenly, it all came back to him. So much was still the same, like the smell of the stones and the great tall tree under which he used to play cowboys and Indians. Sifri was amazed at how much he remembered and how many details he noticed that had changed. He realized the street had been widened, making his yard smaller.

As he relayed his memories, his voice grew lighter and he chuckled a little.Â  Already the father of two grown daughters and truly settled after a lifetime on the move, Sifri considered his childhood home nearly 50 years after having been forced to leave it. Â Quite settled despite his lifetime spent on the move, there was still Mount Carmel, shrouded in the clouds.
[audio:https://immigrantconnect.medill.northwestern.edu/wp-content/uploads/2010/06/Haifa-Cloud-2.mp3] Hear Sifri speak of his reunion with his homeland.