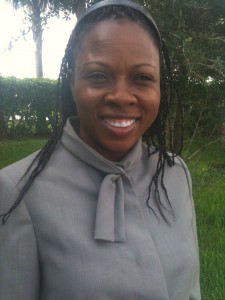 "You'd be more well-behaved if you weren't raised in the U.S.," my Haitian mother would say.

Four days a week, for twelve hours at a time, my mother treats patients in the cardio-vascular intensive care unit of the community hospital. Often the critical hours after heart surgery determine whether a patient lives or dies.

Sometimes after a hard day at work she comes to me, conflicted about doing all she can to help a patient survive only have the person return to a life of disease and discomfort. Sometimes she canâ€™t revive a patient, and watches as the person slips away.

My mother has never been one to take life for granted, probably because she knows how fragile it is. She appreciates everything that has been given to her, including the opportunity to leave for America from her homeland in Haiti.

Thirty years ago, my mother left Port-au-Prince, the capital, as a young girl. She cherishes her cultural roots and is often offended by what she encounters in the states, when she sees someone who reminds her of a patient eating a dayâ€™s worth of calories in one milkshake or when she learns that my friendâ€™s parents donâ€™t go to church.

â€œAmericans donâ€™t have a standard set of morals,â€ sheâ€™d say. â€œThey donâ€™t eat right, they take advantage of each other and they donâ€™t know God.â€ No matter how I try, I havenâ€™t been able to sway her opinion on any of these fronts.

Whenever my brothers and I were disobedient, my mother would express regret about having raised us in this country. â€œYouâ€™d be more well-behaved if you werenâ€™t raised in the U.S.,â€ sheâ€™d say. â€œYouâ€™re just like your American friends. You show no respect.â€

It seems that my mom is just as conflicted about the country that gave her opportunities for life, love and education as she is about the doomed heart patients she treats at the hospital.

For most of my life, Iâ€™ve tried to understand both situations from the wrong vantage point. My mother takes the blame for every little concern and for every devastating catastrophe, even if there is nothing she could have done to stop it. In every victory, whether itâ€™s saving a patient or soaking up the benefits of living in America, she is ill at ease. What certainty can she have that in the long run, sheâ€™s done the right thing?

I look back at all those times that I got flustered with my mother and wish I had put myself in her shoes. I realize now that my mom and I donâ€™t really disagree. She didnâ€™t make those remarks because she isnâ€™t thankful. She made them because she is uncertain and apprehensive about the future. She wants whatâ€™s best for her children, and the possibility that sheâ€™s made the wrong move terrifies her.

Cultural differences aside, itâ€™s difficult to think that your mother might be fallible. If I had taken a moment to understand that, maybe I wouldâ€™ve comforted her.