The right lane: Discoveries from a drive back home 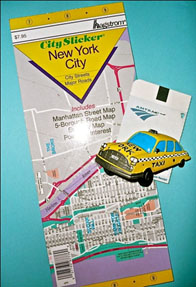 I equate cabs with defeat. After a long day in New York, cab fares seem like punishment for taking the wrong subway, or for ending up on East 59th Street instead of West. The way I see it, hailing a cab is like waving a white flag and admitting I have made a mistake.

However, at 11:30 p.m. on a 96-degree day in July, when the uptown F train reeks of sweat and Chinese food, and the next outbound train from Penn Station to Red Bank, N.J., departs in seven minutes, defeat in the form of an air-conditioned cab sounds pretty desirable.

It was a Friday night in the middle of the heat wave, and my friends and I had met for dinner at a little Mexican restaurant on the Lower East Side. After three rounds of virgin margaritas and six refills of the guacamole bowl, we decided we had over-stayed our welcome and headed to the corner of Stanton and Ludlow to hail a taxi back to the train station.

I flagged the first cab I saw, and slid into the front while four of my friends shimmied into the back seat.

On the floor, I noticed piles of post cards with images of landscapes and city skylines. Thick, black cursive in a language I could not decipher was scrawled on the back.

The driver handed one to me and explained they were from his wife. I looked closely at the letters. The black ink stretched into every corner of the card, as if it were begging for more space.

His wife, the driver told me, was back in Poland. He had left her there more than six years ago and had been waiting for her to join him in New York ever since.

He yawned, and said we were his last ride of the night. After dropping us off, the driver told me he would go home to Queens where he lived with his sister-in-law. She was waiting for someone too. Her husband was also still in Poland.

In the darkness, I could barely make out this manâ€™s features. I did not know his name. Yet, I found myself rapt in his story. While I knew it was invasive, I asked how it would feel when his wife finally arrived.

â€œRight,â€ he answered in a thick accent.Â  It would feel â€œrightâ€ when she reached New York.

Eventually, we pulled in front of Penn Station with two minutes to spare before my train departed. I paid our fee and closed the door behind me.

Sitting on the train that night, I could not help but notice the irony of the situation. After the short commute on the train, I would be back with my family. Only one hour and one $15 ticket stood between them and me. There would be no post cards, or waiting, just an easy path home.

The cab felt different to me that night. It did not feel like failure. The cab, much like the conversation, felt important. It felt right.