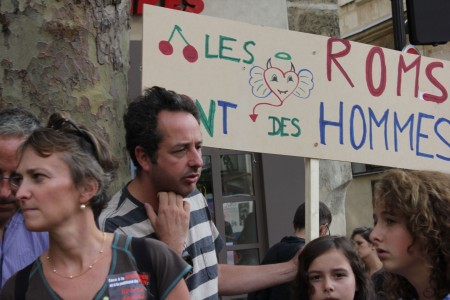 Protests in Paris over the expulsion of Roma

I woke up bright and early, ready for my first interview in Paris. It was my last country before returning to Chicago after a three-month journey around the world studying education for marginalized communities.

We finally arrived at a large house with a tiny garden out front. It was beautiful.

â€œShould I knock?â€ I asked my friend and translator, Raphaelle Neyton. She nodded. Suddenly, a lady came from the basement, carrying a flower watering can.

â€œHello, excuse me!â€ She looked up.

â€œWeâ€™re looking for Mr. Dayo.â€ She yelled something in a foreign language, probably Roma, I assumed, then motioned for us to follow her up the steps.

The door was cracked open and Mr. Dayo strode out from the living room. He was a big, jolly man, and had wispy grey hair. He was comfortably wearing a baby blue shirt and bedroom sandals. He smiled when we saw us. 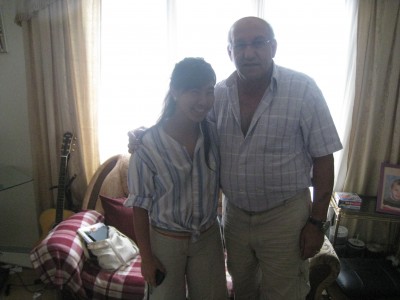 The warm glow over Mr. Dayo and me in his apartment in Paris

He led us to the living room where the sunlight was just starting to bask the room in a warm glow. There were some odd-shaped cookies on the dining room table and we sat down on the sofa.

The interview began and I quickly set up my video camera to get started. I asked my usual questions about education for the Roma people. Mr. Dayo was an expert on the topic, having presented to the Roma Council of Europe and the European Union on Roma issues. He talked about the struggles of the Roma population in France, Â about being an immigrant from Kosovo 20 years ago, and about the challenges and why he is fighting for the rights of the Roma people.

â€œWe are the bastards of Europe,â€ he said.

That caught my attention. This house, his joyfulness and hospitality didnâ€™t seem â€œbastard-like.â€ I wanted to break down those stereotypes and jumped into the conversation and asked, â€œMr Dayo, you say the Roma are the bastards of Europe, but Iâ€™ve always seen communities as filled with gifts, talents, assets and passion. And for you, when were you most proud of your people and your community?â€

Mr. Dayo seemed a little shocked. He fell silent, and looked down at his lap. Â He raised his head and looked me in the eye, almost tearing. His voice was calm. â€œI am so proud to be Roma. No one asks us that, but I am so proud of my culture and people,â€ he said. â€œIn the papers, they see us as bad and dirty, thieves and murderers. But, when the world sees the real us, they will finally understand why we dance, sing and love.â€

That was the kind of story I was looking for in the Roma population. As I went on to more camps, and talked with people, I tried to uncover their gems of hope and pride. There were a multitude of them. Best of all, I asked if I could dance with them. And in the middle of a large refugee camp, we did.