Scarred for life: A passport to stories

The scar on Lourdes Ecksteinâ€™s arm is not an eyesore. Itâ€™s not disturbing to look at or particularly distracting, but it made me wonder.

Sitting in SeÃ±ora Ecksteinâ€™s seventh grade Spanish class day after day, between memorizing vocabulary and verb tenses, I found my thoughts weaving stories of the scarâ€™s history: Why was it there? How long ago did she get it? Did it hurt?

On May 7, after eight long months of waiting, the mystery was solved.

Since the first day of school the whole class had been anticipating this day. SeÃ±ora Eckstein built the excitement, subtly referencing the day from time to time. After all, it wasnâ€™t just any ordinary day; it was the anniversary of her escape from Cuba. 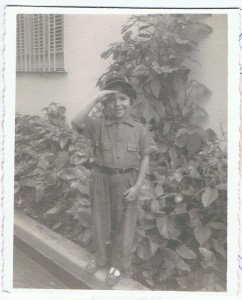 Growing up, Eckstein led a comfortable life. The daughter of a housewife and the secretary of Atlantica del Golfo, an American-owned sugar company, she lived the majority of her childhood in a gorgeous house in La Habana. Beneath the surface, however, turmoil was brewing.

Though it may not have been apparent to the young girl, the social climate in Cuba was changing. Fidel Castroâ€™s rise to power marked a period of intense government scrutiny in the lives of Cuban citizens and for wealthy residents like Ecksteinâ€™s parents, what was once a home quickly became a warzone.

In my narrow 12-year-old world perspective, I had never heard of Fidel Castro. I had no idea about the oppression that Cubans faced to that day. As I listened to my teacher tell her story, I was both enthralled and horrified.

When she spoke of her family members whose fingernails were brutally taken off by members of Castroâ€™s regime, I cringed. When she recounted the night she hid in a bedroom waiting to escape, I was captivated. When she explained how the family left their house under the pretense that they were going on vacation, I was in awe. And when she finally landed in Miami and became a free citizen, I breathed a sigh of relief.

Then came the big reveal.

Immediately after arriving on U.S. soil, seven-year-old Lourdes was brought into a tiny, sweltering room where immigration officials injected her with a smallpox immunization shot. The result? An unofficial passport: the scar.

Ecksteinâ€™s left arm will permanently hold the evidence of her immigration to the United States and the freedom that accompanied her. Her scar matches those of her parents and younger brother and sister â€“ they symbolize the familyâ€™s bond in beginning a new life.

The â€œAmerican dreamâ€ for which the family sacrificed everything did not come to fruition right away. They subsisted on Army rations like powdered milk and spam for months while Ecksteinâ€™s father searched for a job, then finally moved from Miami to New York in November of 1961, six months after their arrival.

From my desk in a Connecticut middle school classroom, this world that SeÃ±ora Eckstein described seemed so foreign. Though I had come to respect her as one of my favorite teachers, SeÃ±ora Ecksteinâ€™s account of escaping from Cuba struck a chord. How could someone with whom I interacted everyday have kept such a story to herself? She filled me with a new fervor to learn not just about the Spanish language but about the culture as well.

SeÃ±ora Eckstein taught me more than verb conjugations and how to ask for directions in Spanish. She taught me to look beyond the obvious scars to the story that lies beneath the surface.