Like a string on his finger: A Cuban’s reminder 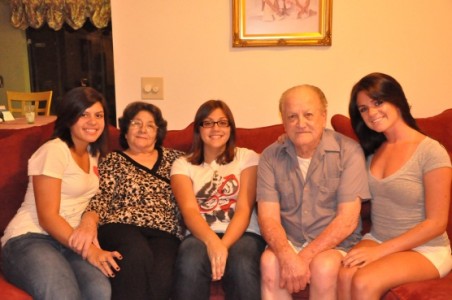 It is 8 in the morning in the middle of June. I am awake not because of any conviction to rise early and seize the day, but because my abuelo is listening to the radio.

The screeching of that radio is better than any alarm clock. As he tries to tune into Cuban stations, jammed frequencies barely decipherable from the static and dance music that plays in an attempt to block them, Abuelo forgets that the rest of the world is trying to sleep. Up goes the volume, and Iâ€™ve little choice but to follow.

Somehow, it was not until I reached near-adulthood that I realized how that squawking radio fit into the life my Cuban abuelo had created for himself in the United States. Itâ€™s a life that both progresses and grounds itself, like a tree that deepens its roots while stretching its branches.

Itâ€™s a struggle that, as a military child, I can sympathize with, but that I can never truly understand. For me, home has always had several associations, but among them is always Florida, where I was born and where I spend most holidays.Â  For him, home exists only in the ideas, the memories.

When he came to the United States in 1967, my abuelo saw opportunity. He saw a chance to leave a country where his beliefs were compromised, and move to a place where his children could live as they pleased. But the possibilities were bittersweet. In order to provide for his family, he had to leave behind the land he had known all his life, a land he loved.

Although he became a de facto Americanâ€”learned English, got a job, became a citizenâ€”his mind remained decidedly Cuban. The plan to return to Cuba, though nebulous, was never something to be doubted. As such, every move he made in the United States, every action he took, was part of something temporary.

In the last few years, Iâ€™ve started to note his idiosyncrasies not as the quirks of an old foreign man, but as the preparations of someone who is ready to go home.

He lies in bed for most of each day, rising only to eat and visit with relatives. His only American friend, an old employer, must come to him if they wish to spend time together.Â  His English has deteriorated so much that I fear that my younger sister, whose Spanish is fairly rudimentary, will never be able to communicate with him. He has given up any hobbies he may have had, and his once-lush garden has become a graveyard for fruit trees and tomato plants, overrun with lizards and stray cats.

His latest preparations involve saving the seeds of every fruit he eats, leaving them to dry in bowls on the kitchen counter. If you try to throw them away, his English is as adamant as it is broken when he says, â€œNo, no! We send to Cuba!â€

His words are not hysterical, but matter-of-fact. Sometimes I envy his certainty, his ability to be so resolute that, eventually, he will return home. The vigor of his hope outweighs every doubt in his mind.

Other times, I pity him. As an intelligent, rational person, he must know on some level that the odds are not in his favor. In his 70s, diabetic and generally ailing, he can barely manage the walk from his bedroom to the kitchen for lunch. A plane ride across the Straits of Florida is feasible only in dreams.

Still, his dedication to a country he hasnâ€™t seen in almost 50 years is astounding. So I watch as he methodically tears the seeds from the flesh, sucking them clean and placing them in their bowls to dry.

A few years ago, my father found thousands of dollars in cash stored in the rafters of the shed out back. With the money were the ashes of a distant relative, who died in this country, leaving my abuelo in charge of transporting his remains home.

Like the radio, and the seeds, Abuelo keeps the remains as a reminder. Like a string tied around his finger, these parts of his life exist to remind him to go home.